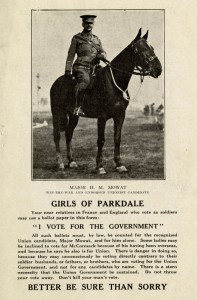 At a 1923 meeting of the Great War Veterans Association (GWVA) in Ottawa, General William Antrobus Griesbach, former Member of Parliament for Edmonton West and Senator for Alberta, remarked on the expected role of the ex-soldier in Canadian political life. “I had an idea at one time,” he explained, “that after the war over half of the Canadian parliament would be men who had served in the war. I had an idea it would hardly be possible for a man to be elected to parliament who had not served his country in the war on active service.” To his disappointment, at the time of this speech, only a handful of sitting MPs had fought in the Great War. Although he cautioned against organized political action by veterans’ groups, Griesbach argued, “I say that the ex-service men should be active in politics, active on all sides.”[1]

Nearly a century later, the number of elected representatives with military experience is small; in the 41st Parliament, 13 of 308 members in the House of Commons. Canadian military personnel and veterans’ lack of success in electoral politics suggests that a military career makes for an uneasy transition into political candidacy.[2] The current federal election campaign does demonstrate, however, that veterans’ issues can emerge as key policy issues.

Once thought to be a reliable Conservative Party constituency, veterans now represent a potential swing voter group. Highly critical of Harper Government cuts and its perceived indifferent attitude, some angered veterans have formed an “Anyone But Conservative” campaign. Their activism has attracted considerable media attention, and you can find the group on Facebook. The major parties have also recruited a number of high-profile military members as candidates in part to bolster creditability on the issue.[3]

During the First World War, a large body of soldiers and veterans were in a position to influence a federal election for the first time in Canadian political history. By the December 1917 campaign between Prime Minister Borden’s Union Government and Laurier’s Opposition Liberals, a growing demand by the English-Canadian public to support veterans and win the war compelled a number of returned men and serving soldiers to assume an active role in electoral politics.

Several soldier-candidates ran under the Unionist banner but others were frustrated by the cumbersome nomination process and old party machinations. In some ridings, soldier-candidates who failed to receive Borden’s official endorsement in favour of civilian nominees nevertheless ran on an independent “Win-the-War” ticket.[4] The result was often venomous campaigns, which divided members of the GWVA, pitted returned soldiers against civilians and strained party loyalties. The contests also raised the question of who could be trusted to best advocate on behalf of veterans from the national legislature. For supporters of soldier-candidates, a military uniform signified special fitness to serve in parliament both during the conflict and after. Some returned men felt only individuals who had shared their experiences in the trenches would effectively support their economic and social interests in the postwar. As one veteran declared, “Who can represent us better than the man who has been over there?”[5] 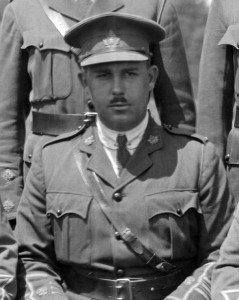 In the Toronto riding of Parkdale, Major Carson McCormack, a veteran of the 3rd Battalion, faced Union-endorsed Herbert Mowat, a former Liberal and militia major who had been rejected for overseas service. McCormack, who was supported by some returned soldiers and some local Tories, refused to withdraw in favour of a candidate “who fought at home.”[6] In an attempt to prove his own military credentials, Mowat released a pamphlet highlighting his militia service alongside conspicuous photographs of himself in uniform. He denounced McCormack as a self-serving officer but detractors objected that Mowat “had gone around in clothes, masquerading as a soldier.”[7]

Unlike civilians, who voted for a named candidate, overseas soldiers received a standard ballot with five choices: a write-in, the Government, the Opposition, an independent and Labour. Calling on the voters of Parkdale not to split the vote, a newspaper notice explained, soldiers “are trusting the Government to appropriate their vote as the Prime Minister and his colleagues think best.”[8] Indeed, McCormack received only a dozen votes from soldiers serving overseas compared to nearly 4,000 for Mowat as the official Government candidate.[9] As one Toronto soldier from a neighbouring riding wrote home, “Couldn’t find out who were the candidates for our constituency so just voted for conscription.”[10]

When the Toronto branch of the GWVA met days after the election which saw all independent soldier-candidates go down in defeat, one member demanded the Prime Minister explain whether “there is a genuine desire on the part of the Unionists to keep us out of Parliament or not.”[11] Others protested that the names of soldier-candidates had been omitted from lists cabled overseas thereby deceiving troops as to who was running in which riding.

Bitter over the contentious campaign and the opposition of many returned soldiers, Mowat continued to complain about McCormack’s candidacy from the House of Commons. His attempt to sympathetically characterize the attitudes of his rival’s supporters struck certain MPs as belittling and condescending. “[S]ome of them have come back maimed or nervous as a result of shell shock,” Mowat observed, “The trouble is that being nervous and somewhat sentimental they are apt to be misled…”[12] Fellow MPs who had actually served on the front resented the implication that returned soldiers were unstable and overly-emotional, and interpreted the remarks as further evidence civilian politicians could not understand the attitudes of veterans or appropriately address their grievances.

If the candidacy of soldiers in 1917 signalled a new importance of veterans in Canadian politics, it also represented the first exploitation of veterans’ issues for political gain. In the years after the war, many veterans became disillusioned with government promises and again called for a stronger voice in parliament. Soldier-candidates who ran for the Liberals in 1921, however, found themselves under attack by the same Conservatives who had, during the war, vowed to support any returned soldier regardless of party affiliation.

In the present, as Canada copes with the costs of the Afghanistan mission and continued military involvement in the Middle East, the First World War provides important historical context for the electoral politics surrounding veterans’ issues. As many returned soldiers suspected during the 1917 campaign, elected representatives cannot necessarily be expected to make informed and thoughtful policy decisions if so few have a personal stake in how government actions, funding priorities and spending cuts directly affect veteran populations.