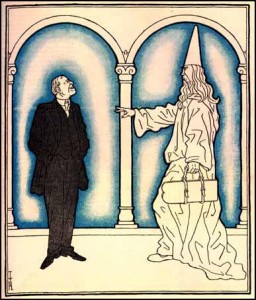 God: Woodrow Wilson, what happened to your Fourteen Points?
Wilson: Don’t worry God, we didn’t follow your Ten Commandments either

I first saw this cartoon when I was in the eleventh grade and I still keep a copy of it with me. There was something about it that I really liked – I’m sure it had something to do with my fascination with the League of Nations. That fascination was born out of the cursory manner in which we studied the League in school. It was treated as a side note, something that existed but was ineffectual and, therefore, not worth studying over events like the Great Depression and the Second World War. In short, it was the William Henry Harrison of international organizations.

The principal reason for why the League is viewed in this way is because in its ultimate goal – that of preventing another war following the Great War – it did not succeed. The significance of this failure cannot be overlooked, particularly as we observed Remembrance Day yesterday, but it does not make the League unworthy of study nor does it diminish some of its important achievements. It was, after all, more than just a precursor to the United Nations.

As we live in an increasingly global environment, there is a renewed interest in the history of international organizations. As Columbia University professor Susan Pedersen, author of the new book The Guardians: The League of Nations and the Crisis of Empire, notes in today’s episode, the League of Nations archives have had to expand in recent years to accommodate the increased number of researchers consulting the files. She says that a majority of these researchers are graduate students, a clear sign that the League and other international organizations strike a chord and are considered important in providing context to modern concerns.

In this episode of the History Slam, I talk with Professor Pedersen about her new book. We chat about the establishment and structure of the League, international diplomacy in the inter-war years, and the legacy of colonialism.

One thought on “History Slam Episode Seventy-Three: The League of Nations”