On March 18, 1931, A.W. Neil, MP for Comox-Alberni in British Columbia, introduced a motion in the House of Commons to have Armistice Day observed on November 11 and “on no other date.” Another MP, C.W. Dickie of Nanaimo, also speaking on behalf of veterans, moved an amendment changing the name from “Armistice” to “Remembrance” Day. This term, Dickie felt, better “implies that we wish to remember and perpetuate.” Parliament swiftly adopted these resolutions and Canada held its first ‘Remembrance Day’ on November 11, 1931. The hour of annual remembrance was fixed at 11 a.m. on 11 November, the time and date of the Armistice in Europe. 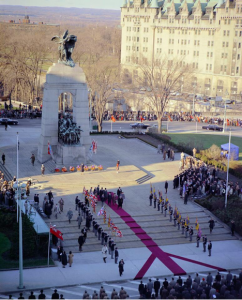 Canadians first started to collect around military cenotaphs in 1902 at the end of the Boer War when the nation indulged in a great, patriotic burst of memorial-building. Monuments to Canada’s first foreign war were erected in city parks and town squares from Victoria to Halifax. Over the next decade, huge crowds would gather around them. By 1918 the trauma and slaughter of the First World War meant that new memorials would be built, but this time they were mostly sombre creations designed simply to honour the dead as opposed to marking military success. In the decades that followed through the Second World War, the Korean War, and Afghanistan, Canadians have gathered faithfully around such memorials each November 11 to remember.

But what is it that we are remembering? And who and what are we leaving out? In many ways we have been confined by a very narrow definition of remembrance. This narrowing represents a lost opportunity to think more deeply about war and its effects, to reflect on the causes of war making, and to search for ways to understand war, death, and sacrifice as meaningful in our modern lives.

Lest We Forget: Remembrance Day Commemorations in Canada

Remembrance Day presents opportunities to collectively mourn for those lives lost in war, and to recognize the sacrifices of those who serve in the armed forces. Building on the theme of loss, and highlighting a focus on the world wars, many of the images we see used in Remembrance Day commemorations often focus on warfare in the past tense. This focus on war in the past is also reflected within a recurring theme presented by media commemorating Remembrance Day – that of conversations and relationships between younger Canadians and older veterans. Bell Canada recently released a commercial where a young girl searches Google to find the meaning of the poppies a veteran is selling. After a transnational online search, she presents the veteran with a pressed poppy from Flanders Field. She also encounters a young veteran in uniform on the bus – a fleeting reminder of reality that Canadian veterans and Canadian experiences of war are also in the present, rather than only in the past.[1] 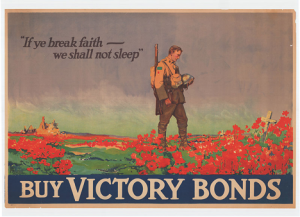 We are called to certain acts of remembrance on November 11: the gathering at monuments or other sites of remembrance; the recitation of John McCrae’s iconic poem, “In Flanders Fields”; the playing of “The Last Post”; a reading of the fourth verse of the “Ode of Remembrance”, and two minutes of silence at 11:00 a.m.. Wreaths are laid at local war memorials and assemblies are held in schools. And we wear poppies. In this last instance, as Victoria Basham has noted, the poppy appeal remembers military sacrifice while forgetting the violence of actual warfare. [2]

The rhetoric of the red poppy also diminishes or often completely omits the sacrifices of others in Canadian society: women, Indigenous peoples, immigrants, visible minorities, peace activists, and all of those who do not fall into the ideal of those who served who are often lauded in commemorative imagery and wording. Within the iconography of Remembrance, the soldier continues to be defined by the figure of a young, fit, white male. Certainly, there are more to remember.

We are rarely called on to search deeper, to think about the causes of war, or to find ways to make wartime death and trauma more meaningful in our lives today. Remembrance Day commemorations offer an opportunity to reflect on war and its sacrifices that is rarely seized; the overt and repetitive symbolism in Remembrance Day ceremonies leaves little room for the complexity of Canadian experiences and imaginings of war.

Historians, including Jay Winter and Paul Fussell, have explored the connections between memory, war, and commemoration in national histories. While national commemoration is an important aspect of Remembrance Day, many Canadians and Canadian families have their own stories about war and its impacts, and these stories do not always fit neatly into the prescribed narrative. For example, Stephanie’s grandfather, Stephen Bangarth, served in the Hungarian army on the Russing Front during WWII in the Carpathian Mountains. He went on to fight in WWII on the Italian front. When participating in Remembrance Day services it is difficult not to think of the grandfather who fought on the “other side”, and who gratefully settled in Canada as a Displaced Person. 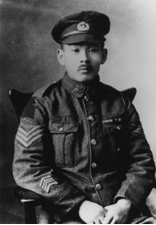 Is there room for this story of war, and others highlighting the impacts of war on Canadian immigration and families, within the symbolism of Remembrance Day? What about the history of Sgt. Masumi Mitsui, WWI veteran and recipient of the Canadian Military Medal for bravery, who was interned following Japan’s attack on Pearl Harbor in 1941? And lest we forget the 6,000 First Nations soldiers and Black Canadians who served in both world wars for whom equality on the battle field did not mean equality at home?

Rather than concentrating our focus predominantly on the world wars, or focussing on familiar versions of commemoration and symbolism, Remembrance Day presents opportunities to honour those who serve in the contemporary armed forces and to advocate for the needs of veterans and their families. Current debates focus on Canada’s roles and responsibilities in reference to the provision of care and services to veterans. A recent Globe and Mail investigation revealed that at least 54 soldiers and veterans killed themselves upon returning from duty in Afghanistan. As retired General Romeo Dallaire has noted, because suicides by reservists and veterans are so poorly tracked this number is likely higher. He is calling for the incoming federal government to establish a covenant that entrenches Canada’s moral obligation to look after military members and their families as part of our nation’s “duty of care”.

As Canadians gather around cenotaphs and monuments, we could be honouring the service of veterans in Canada today by advocating for the betterment of social supports for veterans and their families. The war in Afghanistan certainly made real the risks and consequences of war as it introduced to modern citizens families in our own communities with sons, daughters, wives, and husbands killed and injured overseas.

It is important that in our national focus on commemoration, Canadians remember who we were, who we are, and who we want to be. The answers to these questions will be different and numerous. Remembrance Day presents an opportunity to participate in broader discussions about war and its impacts, discussions that may also bring uncomfortable stories to the surface. From these, we should not shy away. On Remembrance Day we should observe sacrifice but, as Archibald MacLeish urged in his poem, we should aim to give that sacrifice meaning. This is not a call to re-imagine Remembrance Day, but rather to live up to its ideal of meaningful commemoration.

Dr. Stephanie Bangarth is an Associate Professor in History at King’s University College at Western University.

Mary Chaktsiris recently completed her Ph.D. this fall in History at Queen’s University.

*Editor’s note: in September 2019 small factual corrections were made to this piece. Stephanie Bangarth’s grandfather served in the Hungarian army in WWII, not the Austro-Hungarian Army in WWI & the on the Italian Front in WWII. He subsequently came to Canada as a Displaced Person, but there is no evidence he was aided by the German army.