(Active History is pleased to present today’s post in partnership with aidhistory.ca) 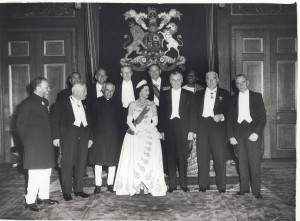 Diefenbaker at the Prime Minister’s Commonwealth Conference in 1960. Diefenbaker was anxious to develop economic connections with the Commonwealth, but few opportunities to do so existed outside of joint aid initiatives. Wikimedia Commons.

In the area of development finance Canada has lagged behind its international partners in the G7, only promising to establish a development finance institution (DFI) in the 2015 budget, some 67 years after the UK established the first DFI. This might come as surprise, since blending the interests of domestic Canadian businesses and official development assistance (ODA) has been an objective of the Canadian government since the early days of aid-giving in the 1950s, to the delight of some, and the dismay of others.

The apparent Canadian disinterest in the potential of development finance goes back to 1958. In the months leading up to the Commonwealth Trade and Economic Conference, held in Montreal in 1958, Canadian officials tried to figure out what joint Canadian-Commonwealth economic initiatives they could announce during the multi-day meeting. Officials turned to aid initiatives as a source for economic collaboration; this was a natural choice, since at that time nearly all of Canada’s aid resources went toward the Commonwealth-oriented Colombo Plan for Co-operative Economic Development in South and Southeast Asia. The UK offered Canada the chance to contribute to its Colonial Development Corporation, first established ten years earlier to help develop overseas markets in the colonies for British economic interests, and later renamed the Commonwealth Development Corporation (CDC). The cabinet committee responsible rejected this proposal without much consideration of its potential merits, presumably because Canadian officials could not see a reciprocal benefit from the contribution. They eventually settled on creating a joint Commonwealth Scholarship program. After that, the door on Canadian participation in a development finance institution (DFI) remained closed for some time.

The CDC is, according to its website, “the world’s oldest DFI.” DFIs are “public financial institutions that provide market financing to the private sector for investment that promotes development” according to one definition by Engineers Without Borders. The idea behind DFIs is relatively simple: use public capital to help private companies invest in developing economies, where market and financing conditions make it difficult to rely solely on private capital.

Early Canadian aid, given primarily through the Colombo Plan between 1951 and 1968, was partially aimed at providing business opportunities for Canadian companies. Canadian engineering firms, mining companies, and manufacturers sold goods and conducted business in countries at the behest of the Canadian government. But these companies were contracted, usually through a bidding process, directly by the Canadian government to fulfill certain pre-determined objectives. A DFI is designed to respond more directly to market conditions, and to bridge the gap between entrepreneurs and finance in conditions that make “normal” investment practices impractical.

It was not until 1969, shortly after the founding of the Canadian International Development Agency (CIDA), that the Canadian government created a program to actively link Canadian business to opportunities outside of government funding in the developing world. In his history of CIDA, David R. Morrison writes about the Business and Industry program, designed to assist Canadian businesses in creating enterprises beneficial to developing economies. As Morrison shows, very little was done with the program until 1978, when it was rebranded as Industrial Cooperation (CIDA-INC). Targeted at small and medium-sized enterprises, it tried to encourage linkages between Canadian business and developing economies. While potentially aimed at encouraging joint ventures between entrepreneurs in Canada and abroad, in reality the program focused mainly on helping Canadian businesses. Morrison cites its Canadian Project Preparation Facility, which helped Canadian businesses prepare better bids for multilateral aid contracts.

According to The McLeod Group, an association that regularly publishes blogs advocating for an enlarged Canadian role in world affairs, a 2007 internal evaluation found that the program did not serve CIDA’s own priorities. Few of the projects ended up in low-income countries or succeeded in any way. It was transferred to the Department of Foreign Affairs and International Trade, but was suspended in 2012 when some accounting “irregularities” were discovered and referred to the RCMP. In any case, CIDA-INC’s activities never truly added up to the type of DFIs being founded in other countries. 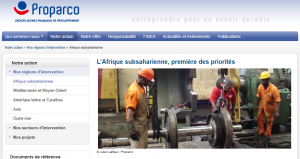 The rest of the G7 countries, and various international financial organizations, followed the UK’s lead, creating their own DFIs. Attractive websites for the DFIs of France or the Netherlands, for example, point to their successes in supporting development-focused initiatives. According to proponents of DFIs, the private sector is already the driver of global economies and development, and these institutions are a way to complement ODA, especially as those budgets shrink in the face of government cut-backs. Sceptics, including NDP MP Hélène Laverdière, argue that DFI investments tend to stay in the financial sector, rather than helping those who need access to funds. 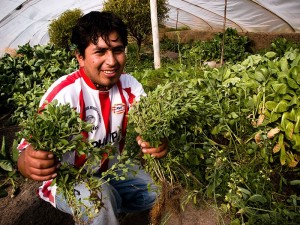 The Harper government was anxious to foster entrepreneurship as part of its development goals. This photo from the Global Affairs International Development website’s “Economic Growth” gallery claims to depict a successful development project at an unnamed Peruvian greenhouse.

In 2015 the Conservative government announced the creation of a DFI in its budget. Given the shut-down of CIDA-INC and Canada’s notable absence on the world DFI stage, few seemed surprised by the declaration. The Canadian government was already working with the World Bank’s DFI, the International Finance Corporation, to assist one project designed to support “the delivery of advisory services in the finance and extractive sectors.” In addition, the former Minister of International Development and La Francophonie, Christian Paradis, chaired the Redesigning Development Finance Initiative Steering Committee, a project of the OECD’s Development Assistance Committee and the World Economic Forum.

These initiatives reflected the Conservative government’s struggle to put its insistent ideological stamp on Canadian foreign aid practices. Previous Progressive Conservative governments had been mostly satisfied with following the international lead in their aid programs, as Liberal governments had also largely done. The new Conservatives self-consciously attempted to move toward aid policies informed by conservative values (as in the shift to funding maternal and child health initiatives) and shaped by conservative financial restraint. They openly sought to re-tool development aid to complement Canada’s extractive sector, funding pilot projects that partnered Canadian NGOs with the Corporate Social Responsibility programs of mining companies operating in the Global South. As Stephen Brown has shown, this shift was not an easy one for the government to manage. In the recent volume Rethinking Canadian Aid, he writes that in addition to facing widespread criticism from the Canadian development community and confusion about the goals of the program, the exact benefits offered by private-sector involvement remained unclear.

What about the promised development finance initiative? Aside from a flurry of opinion pieces following the announcement in 2015, it is unclear what work has been done in creating such an institution. In the main, commentators have been cautiously optimistic, arguing that, if done well, a DFI will help Canada stand alongside other major donors who have found success with the approach.

So far, messaging from the Liberal government has signalled a departure from the previous Conservative government’s overall approach to development. In his ministerial mandate letter to the new Minister of International Development and La Francophonie, Marie-Claude Bibeau, Prime Minister Trudeau’s outline for the government’s “top priorities” centred on refocusing “Canada’s development assistance on helping the poorest and most vulnerable,” and supporting fragile states. While retaining the focus on maternal and child health, the letter takes a swipe at the previous government by stating that their programs be driven by “evidence and outcomes, not ideology.” It specifically mentions the United Nations and climate change, two policy areas not well loved by the previous government. It is only after these initial priorities that Trudeau asks Bibeau to “[w]ork with the Minister of Finance on development financing issues.” No specific mention is made of a DFI, although the statement is vague enough to not preclude its possibility.

For the new Liberal government, the political challenge will be to try to divorce any potential new DFI from the criticisms levelled at the former government – namely, that it was more interested in lining the pocketbooks of Canadian businesses than in helping the poor. However, as demonstrated above, this is a tension that has been at the heart of Canadian aid practices since they began. Initiatives such as the Paris Declaration on Aid Effectiveness, and changing aid practices, have forced government to untie aid to unprecedented levels, which has been regarded as a positive achievement by both the Conservative government and the Liberal governments that preceded it. In light of this step forward with Canadian ODA, it is important that any new Canadian DFI does not replicate the mistakes of past business-focused development measures that have been too inward-looking, focusing on the needs of Canadian industry instead of the needs of developing economies. If it does, it will represent an entirely new era in Canadian development practice.

Jill Campbell-Miller is currently an instructor at Saint Mary’s University. Her dissertation examined the history of Canadian foreign assistance to India during the 1950s and she received her doctorate from the University of Waterloo in 2014. Reach her at jill.campbell-miller@smu.ca or @jill_cm. If you would like to join the Canadian Network on Humanitarian History, please visit aidhistory.ca/members.

One thought on “Investment for Development: The Plodding History of Canadian Development Finance”