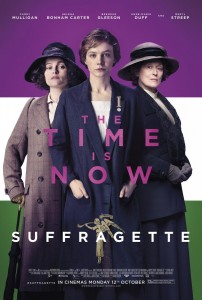 A friend who teaches the history of feminism in Canada recently relayed her students’ responses to the British movie Suffragette. Many found the women heroic, the film “moving” and uplifting. They then described their image of Canadian suffragists: narrow-minded, “classist” and racist, not very radical, hardly inspiring role models.

Their negative image of early Canadian feminists does not necessarily reflect more popular, celebratory views of the suffrage movement, which has recently caught the media’s attention. Various centenaries are upon us, or approaching. A hundred years ago Manitoba enfranchised white women, followed by other provinces; the federal vote was extended in 1918. Quebec celebrations will have to wait until 2040. (I think they should be funded by the Catholic Church, as reparation for its role as a major misogynist stumbling block to women’s rights in that province.) These centenaries and the release of the British film Suffragette offer an opening for us to talk about popular portrayals of the suffrage movement – and why we need to challenge it.

While I dearly wish other aspects of women’s history were publicized more, suffrage history clearly fascinates, so we have to engage critically with its public representation. Understandably, the vote offers a tangible, reassuring example of equality secured: it is proof that liberal, capitalist democracies work and can eventually welcome all outsiders inside. The fact that racialized communities were denied the vote for many years after 1916 gets barely a mention. Portrayals of suffrage tend to boil down to differences of gender, ignoring the complicating roles that class, ethnicity, race and religion played. The erasure of class also means the erasure of socialist-feminism since many socialist-suffragists organized through socialist organizations and with different analyses of inequality – though cross-class collaboration did happen. 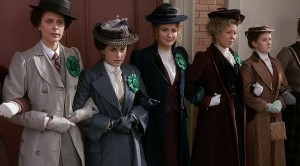 The removal of socialist-suffragists from the story was symbolized for me in an episode of Murdoch Mysteries, a highly successful Canadian television series (marketed globally too), set in Edwardian Toronto. “Election Day” is set against the backdrop of the 1902 provincial campaign in which Canadian Socialist League (CSL) member Margaret Haile ran for office in North Toronto. It was clever political strategy: the law said women could not vote, but it did not say they could not run for office. Previously a leader in the American Socialist Party, Haile premised her campaign on socialist principles: it was not a “suffragette” tactic, as the episode description calls it. In fact, that label had yet to be invented. Haile’s election speech covered in The Globe and Mail was crystal clear about her view of inequality: “Socialism is an international movement recognizing no dividing lines regarding color, creed, sex or nationality and the masses of the human race are disinherited because a small section of the people retrain private ownership of the land and tools of production.” The one percent, not the male percent, was the focus of her critique. Yet, she is written into the episode as a feminist, not a socialist. Only repeated re-winding of the scenes allowed me to see, in a mere fleeting second, a picture of the ballot with her name and “Socialist” written beneath it. 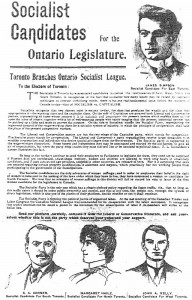 Granted terms like “suffrage” and “suffragette” are recognizable brand-names that viewers can identify with. But why is socialism a dirty word? Why is the popularization of women’s suffrage so often squeezed into a liberal, equal rights mode while the activism of women like Haile, who believed that gender inequality was inextricably linked to capitalism, is erased? The Canadian “suffragettes” in “Election Day” are presented as militant women, intent on securing their gender rights: in one scene they block men from entering the polling station (tactics likely not used at the time). You have to hand it to the writers: they know their Toronto history, evidenced by their inclusion of Haile’s candidacy, and also by the brief appearance of Clara Brett Martin, first woman lawyer in Ontario, (yes, she spoke out on Haile’s behalf). It is true that Haile’s candidacy was a collaborative effort, but the refusal to name a socialist a socialist is an interesting choice that symbolizes the erasure of class and socialism from the suffrage story.

The problems and possibilities of film and history

While some scholars have been critical of using film as a medium to convey or discuss history, claiming there are just “too many errors to correct,” others warn us not to obsess over the ‘facts.’ We can’t expect television and film to be completely authentic: it is fictional drama, after all, and liberties will be taken. One can’t subject a scholarly book and a dramatic film to the same kinds of assessment. Even though historian Robert Rosenstone was very critical about Reds, a film he consulted on, he reminds us that film is an interpretive form that has the potential to convey a feeling for an era, a picture of social relations, a sense of how life was lived, and what ‘might have been.’ I agree: facts can be played with in film as in fiction and what matters is some authentic sense of lived social relations, political possibilities and cultural norms.

Some historians suggest we concentrate our analyses on serious films, with more open-ended interpretive possibilities, not the more linear, simplistic nostalgia/ costume dramas (ie Downton Abbey, or ‘how I learned to love the ruling class’). But many of our students are not watching post-modern films that are “open ended.” Research indicates that mainstream film is one medium the public uses to form conclusions about the past (though not the most trusted one according to studies in the U.S.), and film is a powerful medium for creating a sense of empathy, emotion, connection and affect. Education expert Peter Sexius argues that using film is a useful way to develop students’ historical consciousness, but he warns that students often view such media from a presentist perspective. Films need to be contextualized critically in discussion, developing what Alan Marcus calls “historical film literacy.” 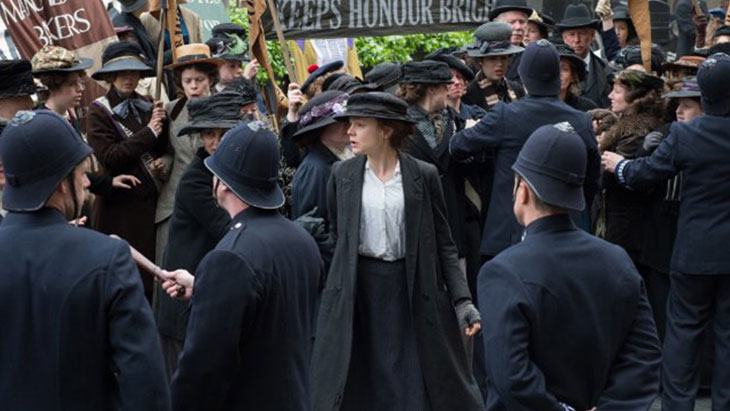 Perhaps, as Peter Sorlin has suggested, historical films tell us most about the cultural climate in which they were written. The social context of life in the UK, where class is heard on the tip of everyone’s accented tongue, where the history of class seems more culturally acknowledged, may explain why class is more visible in Suffragette, written by talented screenwriter Abi Morgan. The heroine is a London laundry worker, sexually harassed at work, kept under her husband’s authority at home, living in near poverty. The images of East London, her workplace, and her lack of options as a working-class woman are starkly realistic: they stand out in comparison to the romanticization of British working-class subservience (again, Downton Abbey). Her outrage and compassion for other working-class women facing poverty and patriarchy on an everyday level make her into a suffragette. Her disgust at the hypocritical treatment of the suffragettes by the violent police and disingenuous politicians solidifies her resistance, again realistically conveying reasons women joined the Women’s Social and Political Union (WSPU).

But in the end, gender trumps class. Our heroine joins the WSPU and is welcomed by the organization, even though, in reality, by 1912 it had moved away from its labour and socialist roots and was increasingly dominated by middle and upper class women. If our fictional heroine existed, she would have joined Sylvia Pankhurst’s East End Federation which DID mobilize suffragette working class women: too bad this was not the focus. Morgan tries to make the point that working-class women were disadvantaged in the political struggle: in one scene, the middle-class husband bails out his wife out of jail, while the laundress is left to languish in prison. Not only is the WSPU portrayed as THE suffrage organization (when there were many political suffrage options) but it is portrayed as a sisterhood with no class barriers or prejudice. Moreover, our heroine’s working-class community is uncomplicatedly and thoroughly patriarchal: it shuns her because she is arrested (perhaps some would have sided with her rather than the police), and her husband throws her out and ‘gives away’ their child to a middle-class couple (somewhat unlikely).

Making up a fictional suffragette character as the central character rather than featuring a story about a famous suffragette was likely a smart dramatic choice: it allowed Morgan the leeway to feature a working-class woman, and prevented us picky historians from endlessly grousing over whether the portrayal of a Pankhurst character was accurate. It is the manner in which class is invoked, only to be suppressed, that I find tragic about this interesting movie. Again, the themes may reflect the present as much as the past. A dose of liberal, mainstream feminism is acceptable. Rabble rousing for an anti-capitalist socialist feminism has far less purchase. I was fascinated by interviews with the film’s stars as they avoided being typecast as too “political.” Sadly, cameo-star Meryl Streep (as Emmeline Pankhurst) told reporters she was a “humanist,” avoiding the “f” (feminist) word, as it was somehow tainted. Luckily some rowdy feminists from the shelter movement disrupted the film’s opening as a means of highlighting ongoing violence against women: the red carpet had a bit of feminist energy, if not from the stars.

TV and film are important historical conscious-raising tools. They can raise interesting questions, and they reach a broad public, our students included: as Sexias argues, the point is to engage critically with the medium, asking why each story is presented as it is, and why, at this point in time? Both the erasure of Margaret Haile’s class and socialist politics in Murdock Mysteries and the problematic negotiation of class in Suffragette indicate that we have a long way to go in conveying the more complicated, ideological diversity of early suffragists.

Joan Sangster is Vanier Professor at Trent University and President of the Canadian Historical Association.

Robert Rosenstone, Visions of the Past: The Challenge of Film to Our Idea of History (Cambridge: Harvard University Press, 1995).