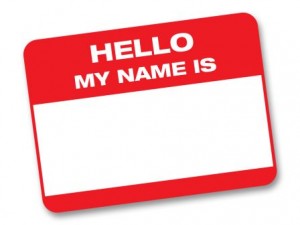 I am not a parent. Nor am I close to becoming a parent. That being said, one of the things that strikes me as a major challenge of early parenthood – perhaps the first challenge after a child is born – is picking a name. The challenges of finding the right name has long been a sitcom staple. And while it may seem easy to pick a name that doesn’t rhyme with a female body part, I would be overwhelmed by the options available. I can stand in the cereal aisle for 20 minutes trying to decide what to get, so the prospect of picking a name seems really intimidating.

Yet, every day people are able to name their kids. Over the past five years, I’ve had a bunch of friends who have gone through the process of naming their newborn children. The consensus seems to be that naming is easier than it seems from the outside – that while there can be and often is lots of discussion beforehand, the right name tends to be clear when the time comes.

The reasons for picking a name can vary greatly, from liking the one a name sounds to honouring a departed family member to concluding that a newborn ‘looks’ like a certain name. Less common, however, is naming your kids after prominent historical figures. While it does happen on occasion, it can be challenging to find a name that is both inspired by someone from history and also fits in the 21st century.

In this episode of the History Slam, Aaron Boyes returns to the show to talk about the best and worst people after whom you can name a child. Taking into account both the person’s achievements and the name’s aesthetic values, we offer some unique options about which you may not have thought.