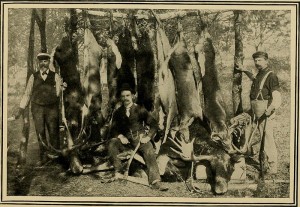 Many are familiar with the show North Woods Law. The show first aired in 2012 and has been popular ever since. If you have not seen the show the premise is simple: camera crews follow Maine game wardens as they do their work. In an episode wardens could be chasing down poachers one minute and searching for missing hikers along the Appalachian Trail the next. Recently, however, the actions of game wardens in an episode have come under fire.

In February of 2014 the Maine Warden Service followed by television cameras concluded a two-year undercover operation in Allagash, Maine, near the Canadian border, and brought some three hundred charges against twenty-three individuals ranging from night hunting and improperly tagging deer to possession of marijuana and taking more trout than the limit allows. While many can generally agree that protecting wildlife is a good goal, Mainers are upset about the tactics used by wardens during this operation. On May 8, 2016 Colin Woodard with the Portland Press Herald ran a lengthy article that criticized the actions of the Maine Warden Service during this operation (click here to read the full article).

Throughout this undercover operation many claim that undercover agents broke the game protection laws they were supposed to be enforcing such as killing deer at night to entice would-be poachers. Perhaps, even worse, the wardens were accused of seizing canned vegetables and fruit from an elderly woman they accused of illegally processing deer meat.[1] This news of the Maine Warden Service behaving badly seems to be the latest accusation on a growing list; Colin Woodard also published a list of controversies surrounding the Maine Warden Service over the past thirteen years (click here to see this list).

What is most surprising about these recent events is that no one has turned to history to help understand or contextualize them. I would like to turn the focus on this matter from the questionable actions of the wardens to consider reasons why rural Mainers may break laws that protect wildlife. It is important to ask why these people are breaking these laws; is it to support their household or is it wanton waste? While these are questions that the Portland Press Herald does not answer outright I suspect the reasons for the illegal actions of the residents of Allagash are more complex and perhaps based in economics. From my perspective as an historian I see this outcry against the Maine Warden Service as a continuation of the later nineteenth century when hunting and game laws in Maine were expanded, increasingly enforced, and highly problematic for rural populations who relied on wildlife to either feed their families directly or sell meat and fur to busy urban markets.

Beginning in the nineteenth century many middle-class urbanites began traveling to Maine to escape the drudgery of city life and relax along the coast or hunt in the woods. To these people wildlife was sport; they hunted for the experience and the trophies. To the people who lived in Maine wildlife was an important resource that could be used to make a living. As the number of tourist-sportsmen increased, however, legislation was enacted to conserve wildlife to help ensure that there would be animals for those from away to hunt. The state established hunting seasons, imposed bag limits, forbade the use of dogs and night hunting for deer, and outlawed the sale of game meat. This legislation dictated when and the proper ways one could hunt limiting the access of rural people to an important resource.

Maine is largely a rural state and faces many economic challenges. Colin Woodard of the Portland Press Herald aptly notes the economic struggles of Allagash, Maine. He states: “The economy orbits around forestry – although mechanization has decimated labor needs – and guiding and supporting those who come from away to hunt, fish or paddle. There isn’t enough money to go around, and over the past 60 years the town’s population has declined by two-thirds, the elementary and high schools have closed, and the average age has risen steadily.”[2] Census.gov lists Maine’s 2014 median household income at $48,804. In Aroostook County, where Allagash, Maine is located, the median household income is even lower; in 2014 Aroostook County had a median household income of $37,378, $11,000 less than the rest of the state. Additionally, about 14% of Maine’s population lives in poverty compared to Aroostook County where about 20% of the population lives in poverty.[3] I am surprised that no one has come forward to speak about the importance deer and moose meat might have for a rural Maine family. Stocking a freezer with game meat can be an important way of making it through difficult economic times. Hunting laws, however, limit such opportunity.

Unlike today, some recognized the increased limitations of access to wildlife resources for rural Mainers in the nineteenth century. Manly Hardy, a nineteenth-century Maine fur dealer, naturalist, and writer, wrote in 1891 in Forest and Stream that he objected to “having any one calling the men who leave our trout in piles to rot on the banks, as I have often seen them, and who kill our game in summer and waste it, ‘true sportsmen,’ and calling other as good men ‘thieves and poachers,’ if later they kill what they need to eat.” Hardy was criticizing tourist-sportsmen who came to Maine to hunt and fish for pleasure and trophies and wasted the meat of animals. He advocated for those who needed wildlife to eat regardless of season. As a wealthy man, it may be somewhat surprising that Manly Hardy felt so passionately about protecting the reputations of Maine’s rural people.[4]

If most of us agree that protecting wildlife is important for either economic or environmental reasons then it would be difficult to argue against legislation that supports this cause. But when access to important natural resources that are needed to support rural populations becomes restricted we must offer new alternatives. In the nineteenth century, and even today, people could become woods guides and provide services to tourist-sportsmen to earn a wage but this is only part-time and highly seasonal work. This also forces us to question the demand for such services in the region. Whether the hunters targeted by the warden’s undercover operation were hunting out of economic necessity is only something they can attest, but to the people of Allagash, and other rural Maine towns, they have been left with no substantial economic replacement for game meat and fur; this is the lasting legacy of the nineteenth century in Maine.

Ian J. Jesse is a PhD candidate in history at the University of Maine. His research examines the varied responses of the Indigenous and non-native rural residents of Maine and New Brunswick during the nineteenth and twentieth centuries.

You can read the Maine Warden Service’s response to the Portland Press Herald here.

For further reading about the historical controversies of conservation in North America please see: