One of the many important conversations held during the ‘New Directions in Active History’ conference considered the evolving ways in which historical knowledge is represented and contested in public spaces and how, as historians, we might participate in such discourses and actively engage with broader audiences. My panel, “Histories, Memories and Museums,” examined the role of museums in particular as sites of mobilization and encounter, as places in which diverse publics encounter history and historiography.

In response to such ideas, my paper suggested that many museums are mapping out ‘new directions in active history’ by examining challenging and sometimes controversial subjects that bridge past and present in a dialogue geared toward social change. Using the Canadian Museum for Human Rights (CMHR), located in Winnipeg MB, as a case study, I wanted to draw connections between the role of curatorial practice as a form of active history, and the broader social and political role of museums in fostering historiographical knowledge.

The function of museums in engaging broad publics and in addressing pressing social issues through exhibitions and programming has grown tremendously over the past several decades. Desiring to become more accessible, relevant, and attuned to both popular and scholarly discourse, museums have increasingly turned toward the exploration of difficult and challenging subjects previously excluded from public history narratives, including histories of colonialism, marginalized communities, discrimination, and related issues of historical injustice.[1] The representation of such subjects in sites of public memory such as museums tells us much about the significance of history in shaping contemporary social and political discourse; hence the need for an engaged and active public history practice.

The Canadian Museum for Human Rights and Active History

The Canadian Museum for Human Rights (CMHR) opened to the public in September 2014 with the mandate “to explore the subject of human rights, with special but not exclusive reference to Canada, in order to enhance the public’s understanding of human rights, to promote respect for others and to encourage reflection and dialogue.”[2] The CMHR was established in a context shaped by two key trends in museological practice. One was the advent of the so-called “New Museology,” which encouraged a fundamental rethinking of museums from sites of authoritative knowledge that presented grand narratives of scientific and cultural evolution, to places of public dialogue, democratic engagement, and popular participation. The second and related development was the rise of sites of conscience and museums dedicated to human rights-related subject matter. We can see the relationship between these two trends; as museums desired to reassert their relevance in a rapidly changing world, they increasingly embraced matters of pressing social and political concern.

A museum for human rights cannot help but examine these critical issues, and cannot help but study history with an active and engaged lens. Such an approach has required the development of curatorial methodologies that represent the past through multiple perspectives, decentering conventional narratives and emphasizing the subjective, varied, and complex nature of history and historical interpretation.

An important strategy in representing history through an active lens is the use of oral history and related forms of personal storytelling as key components of museum exhibitions. As a poignant means of conveying the past, oral testimony provides a particularly affective and powerful way to emphasize the impact of history on lived experience. The integration of oral histories directly into the exhibition itself, as opposed to its use as a research methodology, is a fairly recent departure from the conventional museological reliance on material artefacts to tell stories, and relies heavily on digital technologies as mediums of storytelling. Oral history is a significant way in which the multiplicity and diversity of history, as well as the connections between past experiences and contemporary social issues, are made impactful and poignant in institutions like museums.

The CMHR’s galleries are organized thematically rather than chronologically, a unique approach that encourages exploration of the intersections between a number of human rights issues, as well as an appreciation of the connections between past and present. For instance, visitors encounter content on Indian Residential Schools (IRS) in Canada in four separate galleries, each with a distinct message and interpretation, including connections to the Sixties Scoop and contemporary child welfare practices in Canada, to the Truth and Reconciliation’s Commissions conclusion that IRS constituted a form of cultural genocide, and to the urgent need for national reconciliation in the present day. These distinct approaches are intended to convey the myriad ways the past continues to affect the present, and how historical understanding might begin to facilitate understanding and social justice today. 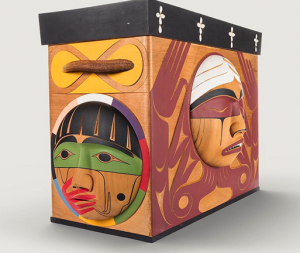 The Truth and Reconciliation Commission’s Bentwood Box, carved by Luke Marston. This box is on display in the CMHR’s Inspiring Change gallery, augmented by a mobile application that presents content digitally through a number of hotspots. Photo credit: Canadian Museum for Human Rights/Aaron Cohen.

The ways in which historiographical practice might include new audiences and communities, encourage innovative forms of knowing and understanding the past, and facilitate engagement with contemporary social and political issues, and the role of new technologies, mediums, and related platforms used to study and represent the past, have been debated greatly over the past number of years. One of the most promising outcomes of the ‘New Directions in Active History’ conference was in moving such conversations from the realm of theory to that of reality.

How do we write, exhibit, preserve, and communicate histories that are engaging, impactful, and work toward social betterment? To whom are historians ultimate responsible—to the public, to the past, to ourselves? What do we want others to think, feel, and do upon encountering our work? And ultimately, what do we hope to achieve by engaging in active history? Such questions ran across the various panels, whether focused on museums, archives, digital technologies, new media, or other forms of historical and historiographical practice. The many challenges and opportunities that curators, public historians, archivists, university-based historians, and others face were brought together in a fruitful dialogue that in many ways only began to scratch the surface of the many frontiers in active history.