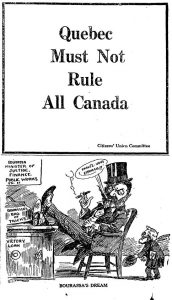 Until 1887, the national Liberal party of Canada was led primarily from Ontario by statesmen hostile to the fiscal importuning of the other provinces. It bore a heavy impress from George Brown, who had largely based his political career on denouncing Catholics and French-Canadians for holding Canada back from its progressive destiny. But after Edward Blake lost yet another election that he should have won, given the strength of popular opinion against John A. Macdonald in other regions of Canada (especially in Nova Scotia and Quebec), the party leadership reversed its Brownian orientation and installed a Catholic French Canadian as its leader. Many Anglo-Protestant supremacists were shocked and appalled at the choice and they were more shocked and appalled when Laurier won the election of 1896. Sir Charles Tupper won a plurality of the popular vote and he held Nova Scotia, New Brunswick, and much of Ontario and Manitoba, but Laurier won an overwhelming victory in Quebec that cemented other successes into a plurality of seats. The country would enter the 20th century, “Canada’s century,” with a French-Canadian Catholic at its head.

Laurier, were he alive today, would probably point to the parallels between his situation and that in the United States in 2016. The election of both Obama and Laurier signaled a new political era, where the old “race” hostilities could be turned into something more consensual and progressive. But in both countries, something different happened. In both cases the out party, which had a nativist base, stoked that base with more or less overt nativist attacks on the prime minister/president by yoking it to anti-establishment sentiment.[1] The result was to heighten rather than to diminish popular racism.

The Laurier years were prosperous ones across much of the country and the Conservatives were largely unable to convince the public that true progress lay with their return to power: Laurier won again in 1900, 1904, and 1908. But though Laurier actually carried the popular vote in Ontario in 1900 and 1904, at no time did he win a majority of seats, and by the election of 1908, the Conservatives were once again in command of the province. Laurier blamed nativist sentiment for that regional defeat and cast about for ways to shore up popular support elsewhere. Western Canada was widely settled during the Laurier years and would have 34 seats in the next election, enough to make up for losses in Ontario.  Western Canada, however, demanded tariff reform. Rising prices roused consumer pressure against inflationary protective tariffs in both Canada and the United States and in January of 1911 the two countries announced that they had done a deal for free trade in resources and agricultural products. Robert Borden’s Conservatives demurred and an election was called for September of 1911, the “Reciprocity Election.” Laurier lost that election and, again, blamed nativism for the defeat.

From the perspective of the Conservative party, the party of protectionism, the reciprocity platform was a gift. But it was not the only gift: in 1910, a French-Canadian Nationalist, Arthur Gilbert, won a by-election in Drummond-Arthabaska, on a platform that denounced Laurier as making too many concessions to British imperialism and to anti-French, anti-Catholic sentiment in Canada. French-Canadian public opinion had largely voted as a block, making the French-Canadians effectively kingmakers in Parliament, but now, for the first time since Confederation, that opinion was split into two hostile factions. Conservative party strategists immediately seized upon the significance of the event. M.E. Nichols, a newspaper publisher with papers in Winnipeg and Montreal, spelled them out in a letter to A.E. Kemp, a tinware manufacturer from the Eastern Townships, now based in Toronto, the head of the Tory-protectionist forces in the Canadian Manufacturers’ Association, and a Tory MP from 1896 to 1908. According to Nichols: “It seems to me that this election changed the whole complexion of the political situation in a single day. The cards are now in our favor if we play them right. To my mind we should let Laurier and Bourassa fight it out in Quebec.” Kemp agreed with Nichols, seeing Laurier hoisted on his own “racialist” petard: “The stock in trade of the Liberal Party in the Province of Quebec, since 1885, has been racial and religious cries… The Liberal Party has educated the people up to false ideas. I am glad the time has come.”[2] Where the Quebec Nationalists saw themselves as provoked by anti-French and anti-Catholic sentiment outside Quebec – especially in regard to separate schools – conservative nationalists outside Quebec saw themselves as confronting a new threat of racialization by a well-treated community nurturing false grievances. Quebec, from that perspective, must be taught a lesson.

In 1911, it was possible to teach that lesson with dog-whistle politics. Because the tariff was the leading question of the day, because the different factions within French Canada were doing battle, key Conservatives like Kemp and Nichols damped down much of the nativism (even such openly hostile Conservative candidates as Sam Hughes, who believed that Quebecers wanted to install a “French republic under Papal direction” and fearfully noted that Canadian arms were all stored in that province) and made the election a straight fight for and against protection. A prominent group of Toronto manufacturers and financiers led that fight, including the “Toronto Eighteen,” all Liberals who crossed the floor and then triumphantly proclaimed the fight to be one that transcended political partyism. They insisted that the free trade deal would hand Canada over to big American business, the JP Morgans and their ilk; far better to put the country into the hands of the Canadian businessmen. This was not just Toronto’s fight in part because the Toronto strategists stoked comparable agitation elsewhere: Kemp advised Borden “I do not think it advisable for Toronto to be the only City in Canada to take any aggressive stand.”[3]

What happened next in Canada? Was Robert Borden Canada’s Hillary Clinton or was he its Donald Trump? What happened was that the dog-whistle politics went mainstream and the next election was the most virulent, openly racist election in Canada’s history. Robert Borden stocked his cabinet with millionaires (seven of them! exclaimed the press) and largely turned the Conservative political machinery to serve their political and economic purposes. When it came time for the next election, the self-styled progressive millionaires found that they could best guarantee their re-election by a much more open and vehement attack on French Canada.

The First World War hugely intensified that tendency. The Khaki election of 1917 has always been seen as almost accidentally racist, a product of the conscription crisis. French Canadians did not enlist and die in proportions comparable to other populations in Canada, especially Canadians of British descent, and in the spring of 1917, Kemp, who had recently replaced Hughes as minister of militia and defence, advised Borden that conscription would be necessary to overcome the “inequalities” of the voluntary system. But it could also be argued that conscription was, to some degree, a strategic excuse for nativists like Hughes and Kemp, especially Ontarians who saw the opportunity to enact George Brown’s original ambitions, as voiced in his celebratory description of the outcome of the Quebec conference in 1864: “Is it not wonderful? French-Canadianism is entirely extinguished.” So, too, in 1917, supremacists in English Canada exalted at the prospect and then the realization, in the results of December 1917, that “Quebec shall not rule Canada” (London Free Press), “Quebec cannot rule over all Canada” (Toronto Globe), that “Ontario must stand by the Union of the Eight Provinces, and must do so in a manner so emphatic and conclusive that Quebec domination will never again be attempted” (Premier Hearst of Ontario), or, in the words of Sir John Willison (who wrote much of the Conservative platform): the election would “destroy the ascendancy of Quebec in Canadian affairs. That has been done but Quebec will be well treated.”[4] The conscription crisis dovetailed with longstanding Anglo-Protestant supremacist aims: had it not occurred, it might have been necessary to invent it.

In Canada a century ago, “progressive” public opinion was business-oriented and nativist. People sought political renewal, spectacular defiance of all the old negotiations and compromises that characterized their national history, and looked to the new breed of millionaires to provide it. But when the millionaires could not deliver on their promises of better conditions for the middle and working classes threatened by inflation and a decline in real wages, they converted that high-mindedness into scapegoating and “racialist” politics directed not just at immigrants but also at religiously and ethnically diverse elements of the population more generally. M.E. Nichols’ Montreal newspaper, the Daily Mail, drew an implicit parallel between Canada and the United States, in a piece published in early July 1917 entitled “How National Problems Start,” that mused on the lessons for Canada in the “black and white problem in the United States.” The American example taught “the danger of allowing great national problems to be created by the selfishness of private interests” whereby “the few thousand negroes stolen from their homes 150 years ago have grown into 10,000,000 and constitute to-day a problem of grave dimensions.”[5] National problems here meant diversity of identity and opinion. Twentieth-century Canada would suffer for many years from the sting of that bitter election.

Elsbeth Heaman teaches history at McGill University. She is completing a book about taxes and tax revolts in Canada from 1867 to 1917.