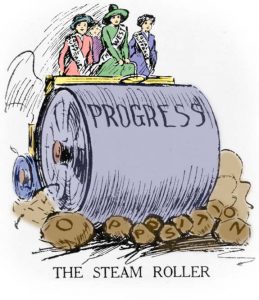 Image from Judge Magazine in 1917.

Not long after Donald Trump’s victory, Hillary Clinton sought to reassure her supporters, and perhaps herself. Echoing President Obama, who in turn drew on Dr. Martin Luther King, Jr., she said “the arc of history is long, but it bends towards justice.”

This is a reasonable and comforting thing to assert, and it may well be right. But, as one European commentator noted, it’s just as likely wrong.

One major insight of history is to critique teleological thinking—the idea that events are moving towards some predetermined end. Analysis of events with set ends, while often useful for providing some manageable structure for courses and narratives, are limited. Alternative ends and paths need to be assessed and developed so that consequences and challenges can be managed.

Listing developments that point to current and future turmoil creates a sense of dread. Consider events that have taken place or that will turn towards a new period of instability, racism, and uneven scarcity. It’s foreseeable that racist discrimination, environmental problems, and social conflict won’t improve, and will indeed worsen. Let’s take recent reports of low ice cover as a sign of impending climate disaster, and also assume that reports that the worst case scenarios traced in the Club of Rome’s 1972 Limits to Growth are indeed happening. Let’s assume that President Trump’s administration follows through on many of its racist polices of registration and deportation (and indeed builds on deportation precedents set by Obama’s administration). In Europe, Brexit happens, Marine Le Pen (or François Fillon, who stretches definitions of ‘centre-right’ to meaninglessness) is elected president, and the EU begins to dissolve under nationalist strains. Let’s assume Assad retains control in what is left of Syria. Let’s assume Vladimir Putin continues to grow in influence and military force. Let’s assume North Korea remains agitated, Japan accelerates re-armament, and southeast Asia continues down the gradual movement towards geopolitical conflict (I could go on).

Interest in turmoil and catastrophe is rising. At McMaster University, Prof. Michael Egan is offering a timely course on Catastrophic History, which considers the definition of catastrophe, and complicates binaries between “natural” and “human actor” produced disasters and catastrophes. Many historians have drawn parallels between the social and political scene today and the rise of fascism during the 1930s. Every period has its own different contexts, and ours is shaped by this resumption of racist, nationalist politics alongside the staggering threats brought by climate change, particularly immediate for people in the north or in lower-income countries.  The narrative of white innocence, and the erasure of real and ongoing incidents of racial violence in search of a period of greatness that exists only in nostalgic grasping, have incredible power to “poison [the] public sphere” irreparably.

Despite all this, we must remember that global disaster is not an inevitable outcome—there is no need for a new teleological end of history. Listing potential crises is not to deny that positive developments have and will continue to happen, or ignore the millions of people who are fighting and agitating against the callous treatment of women in courts, against climate change, and for better treatment of refugees. However, we do need to take seriously the proposition we have entered a period of considerable global disarray, and consider what to do if it is a period that endures for some time.

So, how can historical thinking contribute to action and help combat despair?

These points are rather general, but considering fundamental elements of our society has value during periods of considerable and alarming change. Let’s be wary of prognostications and the inner voices that tremble at stories of inevitable decay, but let’s also not just comfortably assume that the arc of history bends in any specific direction. As Dr. Martin Luther King knew better than anyone, people must do the bending.