One of my friends is a teacher for the Toronto District School Board (TDSB). She recently asked me for help regarding their traditional land acknowledgement recognizing the Anishinaabe, Haudenosaunee, Wendat, and the Metis. She told me that the board was facing considerable resistance from the community regarding the acknowledgment of the Metis. The blow back is understandable, and here’s why.

I’m sure we’ve all seen the Metis wars on Twitter raging amongst our scholarly friends. They rail on about who is and who is not Metis; where the historic Metis homeland is and where it is not. Well if you’re wondering, Toronto isn’t Metis, nor are its historic mixed-bloods. But beyond the contested lines drawn in the scholarly sandbox, here is some actual history to break down why Toronto sits outside of the western Metis homeland and thus should not be included in the TDSB Indigenous land acknowledgement.

In 2014, while I was an undergrad at York University, I wrote an essay called “We are Children of The River: Toronto’s Lost Metis History” as a major research paper for a directed reading course supervised by Dr. Victoria Freeman. In it I argued that Toronto lay along the old French River system prior to 1821 and thus had considerable Metis presence from 1760 up to the departure of Toronto Globe newspaper journalist, Metis James Ross in 1869.[1] The paper won one of York’s major essay prizes, the Odessa Award, as well as the 2015 Dr. James Wu prize for best undergrad thesis. The work is said to have broken new historical ground, or at least uncovered some lost Metis history. But, truthfully, it’s been nothing but a big headache. You see, I argued with all my undergrad vigor, innocence, and ignorance that Toronto was a part of the historic Metis homeland, and, judging by the accolades it won, it was very convincing.

I have since read more books, done more research, and participated in my fair share of Metis Twitter wars and can see now that I was perhaps overly zealous in my inclusionary stance on historic Metis in Toronto. I like to imagine myself kind of like Jacqueline Peterson who once believed Great Lakes mixed-bloods were Metis but, as she aged and became wiser, came to change her inclusionary view of the eastern mixed-bloods once she understood that Metis peoplehood formed exclusively in the western prairies.[2] We live and learn. 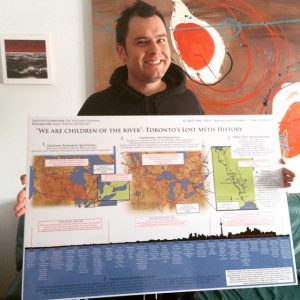 The Author with a Poster of His Research

Indeed, in digging blindly in the archives, I came upon evidence that confirmed that historic Metis had frequently travelled through colonial York, later Toronto, to and from Montreal, the Illinois Country, and the Upper Great Lakes on their way to the Northwest.[3] The main trade route used by these Metis between the years 1760 and 1821 was the Toronto Carrying Place; which, I am sure we all know, was replaced by Yonge Street, a major artery to the Northwest financed in large part by the Northwest Company. Early Yonge Street, then, which ran from Toronto to Lake Simcoe, was Metis voyageur central prior to 1821![4] Some of these sojourning NWC Metis, with last names like Askin, Peltier, McKee, and McKenzie, had solid trade connections to the mixed-blood families at Detroit, Fort Erie, Queenston, Niagara, and Fort Joseph and beyond. However, these were mixed-blood eastern families, not fully political and cultural Metis peoples, like the ones that formed on the western prairies after 1780.

In terms of military involvement, I unearthed a few letters and books that confirmed the Corps of Canadian Voyageurs (Métis)—later the Provincial Commissariat Voyageurs—had defended colonial York by way of Yonge Street in 1813, and that Metis had supplied York throughout the War of 1812.[5]

What is even more interesting, I even discovered the first official printing of the word “half-breed” in Upper Canadian publication history. Half-breed, as the word appeared in an 1818 Upper Canada Gazette pamphlet entitled “Offences in the Indian Territories,” described the Métis plaintiffs Paul Brown and Frenchman Francois Fermin Boucher, who were being prosecuted at York for NWC crimes committed at the Battle of Seven Oaks. Court proceedings were held at Old Montgomery’s assize courthouse located on the northeast corner of what is now Richmond and Victoria Streets just east of Yonge Street.[6] Also accused but not present were “Bostonionas” Peter Pangman and Cuthbert Grant (both Métis), and twelve other senior Lower Canadian-Scot wintering partners of the NWC, who, according to the Hudson Bay Company, had maliciously attacked the Selkirk Colony on 19 June 1816, killing Gov. Semple and his twenty-one of his men.[7]

For those that don’t know, the Battle of Seven Oaks is regarded as the moment when the Metis Nation itself formed into a fully developed political entity. Basically, it’s when scholars and the Metis themselves agree the Metis Nation was founded—kind of like the struggle for Vimy Ridge galvanized the Canadian imagination into forging a new national consciousness, a new independent Canada. You could imagine my surprise when I read that the trial to this all-important Metis ethnogenesis event was held right here in Toronto, right where the restaurant La Bettola Di Terroni now stands— about fifteen hundred kilometres away from Red River and the Metis heartland.

Outside of the trial, which exonerated the accused of any guilt in killing HBC governor Semple at the Battle, the overarching thing that I discovered—much to my dismay—was that Toronto was not the traditional territory of the Metis because it was merely a travel stopover on the way to somewhere else. As hard as I looked I found no trace of a Metis settled community in or around York at any time in the eighteenth or nineteenth century. However bare, I used this scant evidence to defend my cause, but most of it, I admit, was conjecture, historical smoke and mirrors.

After the U.S. Embargo Act of 1807, the 1814 Treaty of Ghent (which ended the War of 1812 and solidified the U.S.-Canada border for the first time), and the formation of the mono-conglomerate HBC (which amalgamated the HBC and the NWC into one powerful company and took all but a trickle of the fur trade to Hudson Bay away from the older Montreal River system on which the Toronto Carrying Place lay), Toronto’s long connection to the fur trade was snuffed out overnight.[8] After 1821 trade no longer ran through Toronto, and—according to the historical record—Metis stopped coming here as well.

It is true: some wealthy “country born” Metis did send their grandchildren and children to the Toronto region to be educated in the 1830s and ’40s—a reflection of their ephemeral connection to York during the NWC period. They almost always returned west or assimilated in one generation into Upper Canadian Anglo society, however, which meant they lost their Metis culture and political identity.[9] Thus, these Metis sons and daughters gradually ceased to be Metis. Remember, as Chris Andersen doggedly reminds us, being Metis is not about racial mixing alone. Rather, it’s about community, collective political will, and ongoing connections to culture and practice. These pillars of Metis ethnogenesis and peoplehood did not exist after the Metis assimilated in Toronto and surrounding region (or at least that’s what my research showed me).

So what does all this mean?

Well, to be frank, and also historically correct: Toronto is not the traditional homeland of the Metis. This is a historically incorrect claim. It is also very harmful to Anishinaabe, Haudenosaunee, and Wendat peoples who are fighting for recognition of their land, a struggle within which land acknowledgements form an important part. Though the Metis traveled through Toronto and had a considerable presence, it is wrong and immoral to say Toronto is traditional Metis territory.

In lieu of all these facts, on November 22, 2016 I went to a joint meeting of the Aboriginal Community Advisory Committee and TDSB to present my research on the Toronto Metis in an effort to correct the mistaken Toronto Metis land acknowledgement. I also did it as a favour to my friend who first approached for advice on the problem. Tasha, I got you.

When I arrived I was relieved to see that I had back up. Tera Beaulieu, the President of the Toronto York Region Metis Council (TYRMC) had pre-emptively sent a letter to the ACAC committee conveying much of the information I have shared above, which makes sense, as we had talked and decided—based on my research—that Toronto was not the traditional nineteenth-century territory of the Metis and should not be remembered as such. Words from Metis-Cree educator Tanya Senk, testimony from Metis Marilyn Hew of the TYRMC, thoughts from knowledge keeper Blu Waters, and insights from Anishinaabeekwes Janine Manning and Lena Recollet all supported the position of dropping Metis from the traditional land acknowledgment of the TDSB. By the end of the meeting it seemed to me that, as a team, we had intervened in a positive way to stop Metis from being wrongly included. All members at the meeting agreed that the traditional land acknowledgement will now only include the Haudenosaunee, Anishinaabee, and Wendat, and that the Metis will be recognized as having an historical presence in Toronto.

Only time and training resources will tell if the TDSB will actually get around to changing the land misrecognition, or if they actually listen to history. As it stands now, things appear hopeful.

Jesse Thistle is a PhD student in History at York University. He is Métis-Cree-Scot from northern Saskatchewan, but was raised in Toronto. Jesse is a Trudeau and Vanier scholar, as well as a Governor General Silver Medalist. He also sits as the national representative for Indigenous Homelessness in Canada for the Canadian Observatory on Homelessness.

[6] The Upper Canada Gazette. “Offences in the Indian Country,” October 29, 1818, Toronto Reference Library Archives and Pelham C. Mulvany, Toronto Past and Present Until 1882: A Handbook of the City. (Toronto: W. E. Caiger Publisher, 1884), 19-20 and Scadding, Henry. Toronto of Old: Collections and Recollections Illustrative of the Early Settlement and Social Life of the Capital of Ontario. (Toronto: Adam, Stevenson & Co, 1873), 289.