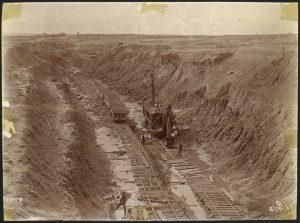 The creation and failure of Chignecto Marine Transport Railway Company (CMTRC) — in effect, a “ship railway” — is usually presented as a unique episode in Maritime and Canadian history. In 2012, the Nova Scotia provincial government moved to commemorate the company (and, perhaps unintendedly, its failure) by purchasing the land on which the project was to be built in order to ensure its protection and preservation for the future. The brainchild of engineer Henry Ketchum, the Chignecto ship railway financially collapsed in 1890 and was never revived. For the provincial government and local outdoor enthusiasts, the land on which it sits is important in itself and has been incorporated into the Trans Canada Trail.[1] At the time the land was purchased, the then Minister of Natural Resources explained that his “Government was acting to preserve the historical, recreation, and natural value of this unique piece of land.”[2]

Exactly what, however, was being commemorated and why? The commemoration of the Ketchum’s ship railway affords an interesting opportunity to think about how we mark failure in history. However “innovative” (in Ketchum’s words) a ship railway may have been, it was never completed and, thus, never used. How do we think historically about failure and why might this be important to broader historical narratives?

The basic facts of the CMTRC are straightforward.  The idea was proposed by Ketchum in the 1870s with the company incorporated and financing in place by 1882. The federal government agreed to provide an appreciable annual subsidy if the ship railway was completed on time. The objective of the CMTRC was to cut transportation time from the Bay of Fundy to the Northumberland Strait and, from there, to the St. Lawrence River. Instead of sailing around Nova Scotia, ships would dock at Fort Lawrence to be raised by a hydraulic system to a wide set railway track and pulled overland to Tidnish by specially designed locomotives. The entire process would take at most several hours facilitating trade and communication between the Bay of Fundy area and the St. Lawrence region.[3] 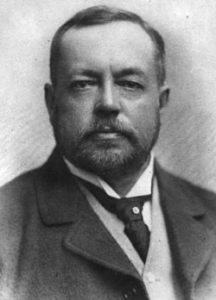 The project’s leading proponent, Ketchum, had a mixed history that illustrates the way in which railway development in the Maritimes was connected to broader patterns of imperial and global commerce. Ketchum was born in Fredericton 1839. He married Sarah F. Milner of Sackville in 1866 and died in Amherst in 1896. He earned the first diploma of King’s College cum UNB civil engineering program in 1862 and worked in railways his adult life. As a student he worked on another failed project: the European and North American Railway, which was to link Halifax and Portland, Me., part of which was later absorbed the Intercolonial Railway. Later, he made a name for himself in engineering circles for his work with the British firm that was building the São Paulo Railway in Brazil. He later became involved in the International Contracting Company that also went bankrupt before it could complete a railway linking Truro, NS, and Moncton, NB. In short, by the time he turned his attention to the idea of a ship railway, Ketchum’s involvement in railway building left a mixed legacy.[4]

What made the idea so appealing was its connection to then common conceptions of progress. Contemporary commentary described the project as a marker of Maritime modernity: “one of the most remarkable works of modern times” and noted, as well, that the “steal for the track is the heaviest ever made,” something to be apparently valued in and of itself.[5] For Ketchum, the matter was simpler. He conceptualized the CMTRC as an engineering problem. And, what was important was that engineering had advanced to the point where this problem could be solved. The fact — or, so he believed — that no one else had attempted such a venture did not mean that it should not  — and could not — be done.[6] Ultimately, however, the CMTRC was doomed by financing. Construction began in 1888 and by 1890 it may have been nearly 50 percent complete when Ketchum’s key financial backer’s support was cut off by losses in Latin America and then the general economic downturn of 1890. 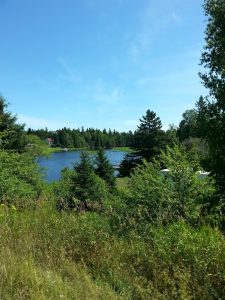 By itself, this is an interesting history that tells us something about the scope of international finance capitalism and the effects of market crises. The CMTRC can also be linked to the latter nineteenth-century railway boom both in terms of culture and economics.[7] Today, however, it is primarily marked as a tourist site: a “unique” idea that can be imagined in a picturesque setting now connected to the a renewed outdoors vogue for hiking, snowmobiling, or trail running. Or, as the Nova Scotia government calls it “[a] hiking trail and a history tale.”[8] Here, the exact history of the ship railway is not all that important. What is important is the sense of history one experiences while hiking. Exactly what this is (other than a vague sense of pastness) is not clear. The then Minister of Communities, Culture, and Heritage noted: “Protecting places that tells the stories of our Nova Scotia heritage is important for all of us …” but did not explain why.  Nor, does the historic display that marks the CMTRC in Tidnish seem to be able to indicate what viewers should find of importance in the location, although it tries to connect the ship railway to the story of progress as if it had actually worked.

I want to suggest that the key lessons we can learn from Ketchum’s ship railway can relate to these points, but the boosterish efforts to connect it to an outdoor lifestyle or “Maritime firsts” miss the point that studying failure in history might actually be important. There are some efforts to study failure although these take odd turns that tend to end up reinforcing “great man” narratives: the great man, in these narratives, might not always succeed but does not accept failure. Henry Ford, Bill Gates, Walt Disney, among others, had to persevere and learning to persevere is, so this narrative runs, important in that it makes for later success.[9] Scott Sandage’s work on failed businessmen in nineteenth century America takes a different and more sophisticated approach, suggesting that concepts of middle and upper class masculinity were tied up in conceptions of economic success and failure. (There are more than a few shades of Donald Trump here.) This may be why, as Ian McKay’s work long ago suggested, that historical commemoration has little time for failure, preferring things that are “firsts”: innovations that marked a path that others followed.

The failure of the CMTRC was overdetermined. It was never, of course, intended to be a picturesque piece of heritage and its redeployment as that does a remarkable disservice to the ideas that animated it in the first place. Nor, was it really unique.[10] Instead, treating this failure seriously and historically means exploring its diverse causes, from engineering to the cultural to economic or political. It means asking key questions: was this, in fact, a good idea? What lead some people to think that it was? Who were those people and what linked them together? Were they simply dreamers, the engineering equivalent of visionary avant garde artists? Or, were they more practical, investment oriented business leaders? Does failure mean different things to men and women or to different social and ethnic groups? What actually makes for failure?  Are some failures later, as it were, justified by history as was at least some trends in avant garde or social realist art?

Exactly what it means to fail likely changes over time, but with that change we might also think about why such a high premium is placed on “success” and what success actually means. There are more than one’s fair share of failures in history. Failed regional economic development schemes; failed social movements and business enterprises or sports teams, among other things. If we stop using the word “failure” pejoratively, we can open up a new avenue of historical study that can help us understand how the past actually unfolded and how we have arrived at our own location in history.