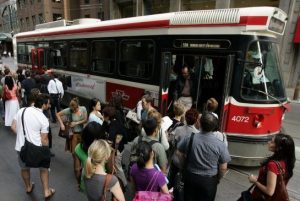 As anyone who lives in or frequents Toronto’s inner-city can attest, the place is over-run with human activity. The word “congestion” is probably over-used in urban affairs, and it still feels tainted by its long association with slum clearances, but it is the word that comes to mind when travelling about the city’s lower downtown these days. Walking is usually the fastest way to get around – certainly faster than streetcar, taxi, or automobile travel, though perhaps not faster than bicycling for anyone willing to face the risks – though walking can be frustrating, and even dangerous, when the sidewalks fill up like rush-hour subway cars.

Congestion-related problems appear in the local news almost every day. Most recently is the alarming increase in motor vehicle accidents involving cyclists and pedestrians. But others crop up regularly: unreliable electricity supply, insufficient public libraries and schools, conflicts over land use (dogs vs children, residents vs clubs), and of course the endless problem of surface public transit which, in truth, barely functions. At times the situation seems perversely amusing, but at other times truly alarming – deleterious consequences multiply, and policy solutions are nowhere to be found.

Viewing this through the lens of history reveals an intriguing, and perhaps rather surprising, parallel between recent growth in the inner-city and postwar expansion of the suburbs. On the surface, of course, they reflect population migrations in opposite directions, but at the root of both is a conviction, pervasive in the popular mindset of the time, that these migrations would yield a better urban life. Suburbia in the 1950s was so much more attractive than run-down old city neighbourhoods, with their rows of nearly windowless old houses crammed into narrow lots on streets arranged in unimaginative rectilinear grids. Whereas the old city in the 1970s held so much more appeal than humdrum suburbs, with their cookie-cutter, picture-windowed houses on wastefully large lots facing streets laid out in pretentious curvilinear arrays.

Whether either of these urban environments actually provided a better life for the people who moved into them, who can say? But there can be no doubt that many believed they would, especially young adults with good incomes and promising futures, and that this collective conviction fuelled migrations of considerable magnitude and consequence. The migrations created not only a strong demand for new housing in the destination areas, stimulating huge investments, personal and corporate. They also created – by virtue of what they disdained – substantial areas of less desirable housing, in the inner city in the case of the suburban migration and in the older suburbs in the case of the more recent inward migration. Neither of these less desirable areas was truly abandoned, but they certainly lost cachet and, in market terms, value, which in turn discouraged investments into upkeep and renovation. Of course undervalued also meant relatively inexpensive, something that early inner-city migrants were able to exploit and residents of the old suburbs seem to be doing now. The specifics are different. The phenomenon is essentially the same.

Another way they differ is that the move out to the suburbs was planned while the move back into the city was not. In the early 1950s, once it became clear that Toronto’s metropolitan area was going to continue growing, the Province of Ontario created a planning board to plan and manage the expected expansion, and the board did so in a remarkably comprehensive manner: land-uses, roads, transit, piped services, parks, schools, and even, to a degree, health and social services all formed part of a metropolitan plan. Moreover the plan was actually followed and the required infrastructure was built, at a size and scale sufficient for the projected population. 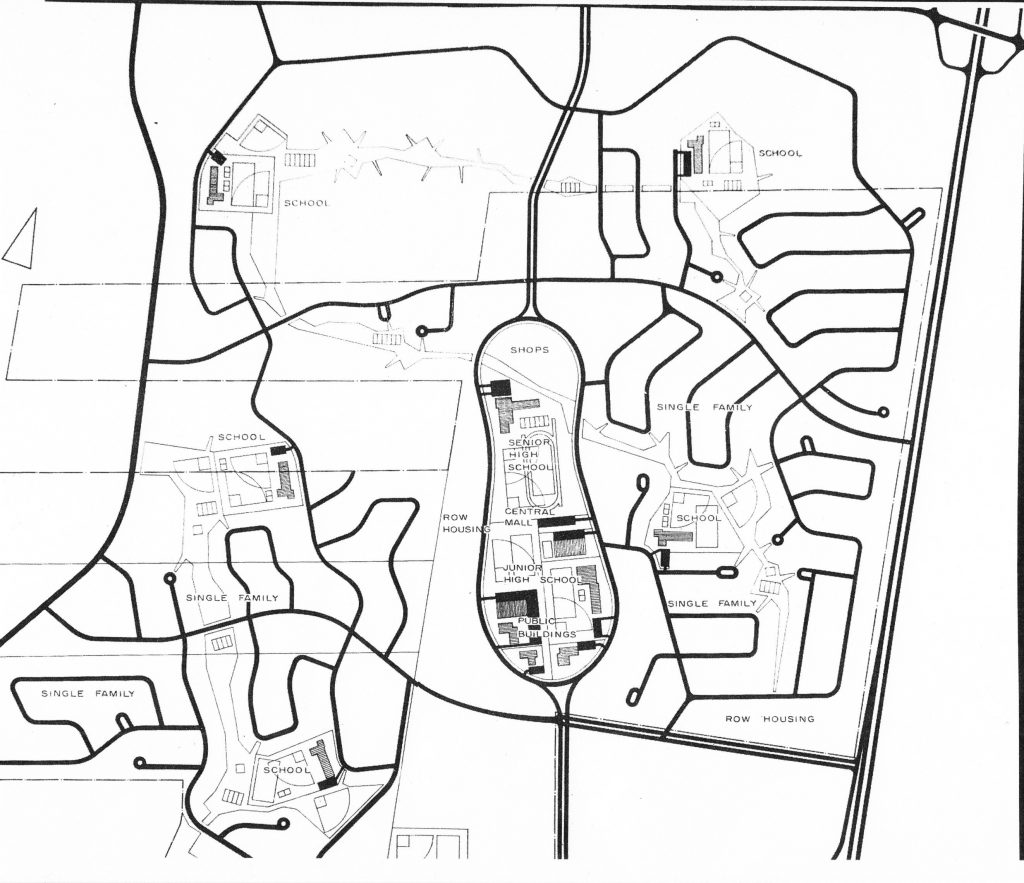 Planning the outward migration: everything in its place. Don Valley Village (“The Peanut”),
as planned by Project Planning Associates, c. 1963. PPA fonds, University of Guelph Library.

Such planning was not done for the migration back the other way. Initially, when the movement began in the 1960s, planning just did not seem necessary; numbers were small and the receiving neighbourhoods, such as Cabbagetown or the Annex, had ample infrastructure and services. A decade later the city did produce a “Central Area Plan” explicitly promoting inner-city residential development and laying the foundation for today’s influx, so the city did plan, in a sense, but not comprehensively; its plan paid little heed to the greater demand for services that would result from its success – which, of course, the planners could not predict. Even in the 1980s and 90s, as the inward migration gained steam, planning was encouraging inner-city residential development in specific places – Housing on Main Streets, the Railway Lands – without any plan for the inner-city influx overall.

Why the outward migration was planned and the inward was not is an intriguing historical question. Certainly the fact that the former went onto farmland and the latter went into fully urbanized land is a big part of the answer. In a built-up inner city any new infrastructure or major change in land use affects thousands of property owners, commercial and residential, and inner-city land prices are so high that acquiring land for public purposes is nearly impossible.

But other factors were at work. The city’s now well known antipathy towards roads had taken root by the 1970s – some transportation engineers, seeing the first signs of the inner-city influx in the mid-1970s, proposed increasing the capacity of, and expanding access to and egress from, the Gardiner Expressway to accommodate new population, but their suggestion was unequivocally rejected by Toronto planners and city council. New planning principles were emerging: urban congestion was becoming simply the nature of urban life, no longer something one should strive to alleviate. The process of planning had changed too, one of its new guiding principles being that public endorsement of plans was nearly essential – making major infrastructure construction more unlikely than ever. 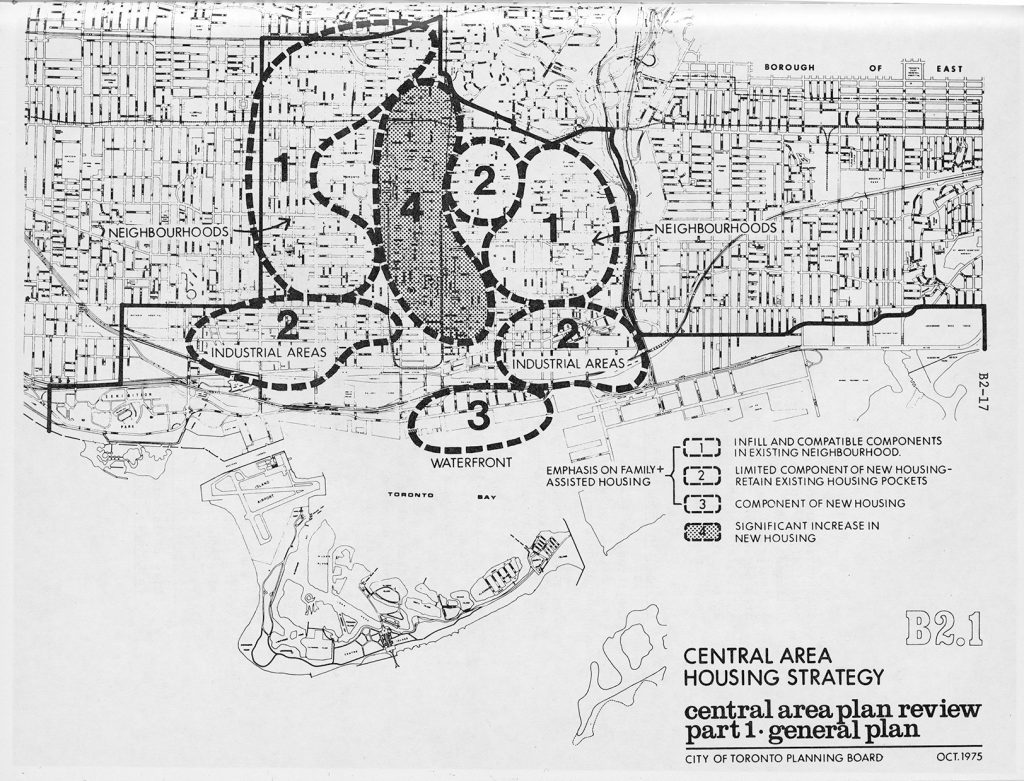 Whatever the reason, however one explains it, the migration back into the city was not planned to nearly the extent that the migration out to the suburbs was. And in the last five or ten years the consequences of this have become both clearer and harder to bear. It is difficult to lay blame for this. The city and its planners should perhaps have paid more attention to the future and less to the present in the 1980s. But even if they had devised an overall plan to accommodate the inner-city influx it is hard to imagine such a plan receiving the public endorsement it would have needed. As often is the case, history helps us understand present-day problems, but offers little to help us solve them.

One thought on “Planned and Unplanned Urban Migrations”