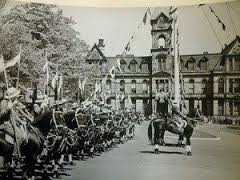 The Junior Bengal Lancers on display in Parade Square. Photo courtesy of the Lancer Archive.

Opening with scenes of Halifax harbour viewed from atop Citadel Hill, the 1956 RKO-Pathé production entitled “Canadian Lancers” turns to scenes of youth riding across green grass in the centre of Halifax. The narrator proclaims, “The junior Lancers, an accomplished children’s riding group, has its own riding ground; this is the mecca of young and hopeful equestrians”. The film follows the young Halifax Junior Bengal Lancers to Annapolis Royal where they perform their famed “musical ride” in all its splendor in celebration of the town’s founding.[1] Their colourful uniform, modeled after the English army India service uniform, consisting of a red tunic, khaki jodhpurs, white gloves, a white pith helmet and, of course, a lance complete with a flag, added to the spectacle.

That a small children’s riding club from Halifax, Nova Scotia rose to public acclaim and became featured in an international film production in such a short period of time since its founding, gives pause. The appeal of the Lancers was rooted in the fact that it was a unique children’s club that, through sport and skill, embodied service, citizenship, and duty – prized values of the day.

In 1936, M.B. “Dick” Zwicker founded the Halifax Riding and Driving Club. With talk of war, Zwicker astutely recognised that in a time of conflict adults would neglect hobbies but were likely to continue providing for their children. He began instructing Halifax’s youth who could not practically keep their own horses. Part of this instruction came in the form of a drill team which performed at local gymkhanas. After watching the film “The Lives of a Bengal Lancer”, Zwicker envisioned junior Bengal Lancers who would perform a musical ride. By this time, the RCMP and the Royal Canadian Dragoons had their own regimented musical rides, so Zwicker’s idea was a youth version of the adult, militarised displays.

The group officially debuted their musical ride at the 1936 Nova Scotia Provincial Exhibition, where they performed a series of circular exercises to the tune of “Parade of the Wooden Soldiers.” The excitement of the crowd, however, wore off on one of the horses; Teddy expressed his vim by ducking, causing his young rider to launch over his head. Much to the crowd’s pleasure, while the others resisted falling out of formation, the little girl collected herself, remounted her horse, and raced back to rejoin the ride. Newspaper headlines the following day praised the riders for their courage and determination to carry on – qualities that would soon define the Lancers.[2]

In 1937 and 1938, the group of 16 riders (the youngest eight and the eldest 14) were again crowd pleasers at the Provincial Exhibition. So good was their 1938 display that the horse show judge returned to Toronto with tales of the colourful, well-organised musical ride. To Zwicker’s delight, a few weeks later the children’s ride was invited to perform at the 1938 Royal Agricultural Winter Fair in Toronto, with all expenses paid.[3] One newspaper report proclaimed the “youthful riders [a] hit” and purported that the musical ride “would do credit to any military display”. With eye-catching photos plastered across news sheets, the children were portrayed as enthusiastic, capable, and plucky.

While the children knew that their job was to perform in the Toronto coliseum, they were largely unaware that they would have to continue their performance and role as Lancers everywhere they went in Toronto. Always dressed in their identifiable Lancer uniform, the children were paraded around the city – they toured the Globe and Mail building, were formally announced at a hockey game at Maple Leaf Gardens, and even proceeded to meet the Mayor. The group was featured on a CBC radio broadcast and would even stop in Ottawa on the journey home for a special tour of Parliament.

Being able to execute their musical ride with such flourish and precision meant that their presence at the 1938 Royal established new expectations. Although newspaper coverage still identified the group as equestrians, the term “troupe” was widely used. Rather than a unit, troop, or team, a troupe has an inherently performative meaning. Headlines turned to rhetoric of service with one claiming: “Riders have civic duty to perform”. So skilled were the riders that when the captain of the Irish jumping team was asked by a junior rider at the Eglington Hunt Club, “what is the correct way to ride?” he responded by suggesting they go to the Royal to watch “the children from Halifax”. With their skill, spirit, and performance, the group, with humble beginnings in Halifax, had ridden onto the national stage.

As war broke out in 1939, the musical ride remained closer to home in Halifax, but their public service did not wane. With the war requiring the city to commandeer the use of the Exhibition grounds and stables, in 1941 the musical ride moved to a new location at the base of Citadel Hill and became embedded into the landscape of downtown Halifax. Called to service in 1943, the riders participated in the Halifax Victory Loan parade and even performed a “Victory Loan Show”, displaying jumping, western roping, crowd pleasing games, and, of course, a musical ride at Parade Square in front of City Hall. The performance earned a thank you from the province’s National War Finance Committee.

As the war ended, Lancer activities once again ramped up and, in 1947, the young equestrians rose to international fame when they were invited to Boston to perform in the New England Horse Show at Boston Garden. The Nova Scotia government contributed funds to make the Lancer’s performance a thirty year anniversary gift in recognition of the relief service the people of Boston provided after the Halifax Explosion. The Lancers were again put on public display: a presentation at State House, then City Hall; a parade through the streets of Boston; visits to the Metropolitan Theatre, the baseball stadium, and Harvard University; and to the local radio station for an interview. Seven-year-old Lancer Miss Mary Ann Marshall was even recruited to deliver best wishes from the people of Nova Scotia to those of Massachusetts. The riders’ performance again met with public adoration and awe, this time from an international audience.

Over a mere eleven years, of which six were disturbed by war, the Halifax Junior Bengal Lancers transcended local, national, and international boundaries. Under the guidance of Dick Zwicker, the team of youthful Lancers (which routinely changed as children “aged out”) and their horses honed their skill, maintained a visual identity characterised by their unique uniforms, and developed a reputation for service. Indeed, at times this performative service was imposed upon them, but overall, each and every Lancer wittingly chose to join the Lancers and use their riding skills to advance the musical ride. As historians of childhood know all too well, we must recognise instances where children exhibit their own agency through their actions. That local newspaper obituaries commonly include references to belonging to the Lancers reveals an association of pride and lasting identity as a “Lancer”.

Since 1936, the Lancers have been representatives for the City of Halifax and the province of Nova Scotia, and have acted as ambassadors for Canada. Only a few notable performances have been included here and none should be considered the pinnacle of the Lancers’ public affairs. In 1949, the Lancers “Captured hearts at Ex” at the CNE, on numerous occasions they have been inspected by both Queen Elizabeth and Princess Anne, and they have participated in founding anniversaries for Fredericton and Halifax.[4] While many other internationally recognised children’s groups such as the IODE and the Girl Guides/Boy Scouts have longer histories and are founded on similar values of citizenship and service, the Lancers provide an interesting case of a youth organization providing service through non-competitive sport.

The Halifax Junior Bengal Lancers is now in its 81st year and still operates from their stables at the foot of Citadel Hill. Under the new leadership of Angie Holt, in 2016 the musical ride went from being performed only at the stables’ October Open House to also being publicly performed on Canada Day and at the Atlantic Fall Fair.[5] This revival, which riders and horses still work tirelessly to perfect, would no doubt please Dick Zwicker. Remarkably, the only thing that has changed in 81 years is the replacement of white pith helmets with modern, approved safety helmets. Now, as a not-for-profit, the Lancers continue to serve their community and act as some of Canada’s youngest ambassadors.

Claire L. Halstead, PhD is a Research Associate at the Gorsebrook Research Institute for Atlantic Canadian Studies at Saint Mary’s University. She is currently working on two separate digital history projects on the Halifax Explosion and Halifax in the First World War.