This essay is the introduction to a special issue of the Canadian Centre for Policy Alternatives Monitor “Views of Canada: Active History.” You can download the PDF using this link. 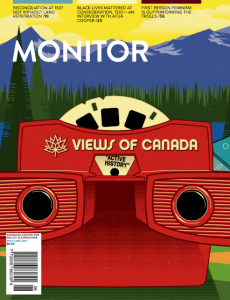 There is an important difference between celebration and commemoration. In considering Canada 150, the government tagline for this year’s sesquicentennial festivities, the contributors to this special issue of the Monitor argue too little of what we are seeing can, or is even intended to, lead the country to a fuller understanding of its history.

To truly commemorate – whether it is Canada’s Confederation or any other moment – we need to address those things we find distasteful and disappointing says Afua Cooper, as well as those things that make us proud. If you can’t do that on your country’s 150th birthday, she asks when is the right time.

The new CBC television series, Canada: The Story of Us, is a case in point of how not to commemorate. The 10-hour drama-documentary “celebrates how we transformed differences into understanding and created a unique national identity,” according to the national broadcaster. Unfortunately, the program almost uncritically reaffirms an Anglocentric understanding of Canada and its values. Indigenous peoples are bit players, for example, supporting actors in the grand sweep of English Canadian history, while French Canadians (the show was not translated) are presented as untrustworthy and uncouth. These tropes were out of place in the 1960s. They are embarrassing today.

If we are intent on celebrating Canada at this important moment it must be done in a way that is both inclusive and critical. As Daisy Raphael points out on page 23 of this issue, an emphasis on the white settler version of Canada permeated the Conservative government’s Road to 2017 as much as it does the Liberal’s Canada 150. Though there are some differences in tone and emphasis, both concepts paint a uniformly positive picture of Canada, its history and place in the world. Both Harper’s contention that Canada was never a colonial power and Trudeau’s sunny claims of Canadian openness and inclusivity mask an unwillingness to deal with historical and ongoing systems of oppression, differentiation and discrimination.

This issue is addressed in slightly different ways by Ian Mosby on page 43 and Tara Williamson on page 19. Williamson, an Indigenous artist and writer, problematizes the idea of reconciliation, which the government has attempted to tie to the Canada 150 festivities. For her and other Indigenous voices reconciliation is a way for settler Canada to move on; it is another request for Indigenous Canadians to compromise their demands for self-determination and respect, forget about their land and try again to fit in.

Mosby notes that Prime Minister Trudeau’s promise to implement the recommendations of the Truth and Reconciliation Commission has gone largely unfulfilled while Canada is only now considering implementing the UN Declaration on the Rights of Indigenous Peoples. Indigenous survivors of Canada’s residential schools came forward and told their stories of abuse, dislocation and indifference, often at great personal cost, he writes. It’s up to settler Canada to do the hard work of reconciliation. Why not start in earnest during the sesquicentennial?

Indigenous Canadians are not the only ones who find themselves written out of Canada 150. Pierre Beaudet takes a long view of Quebec’s history since the British conquest (page 38), reminding us that for much of its existence the province was the economic and social plaything of English Canadian capitalists and French Quebec’s Catholic and conservative elites. Both groups, dominating Quebec at different times, had opposing ideas about what the distinct society should look like, yet they agreed the interests and desires of Quebecers were secondary. Though the national question is on the backburner for now, Beaudet suggests that with political elites increasingly challenged by social movements as neoliberal and undemocratic, Quebecers may soon try again to take political power in their own name.

Similarly, in her interview with editor Stuart Trew on page 25 Afua Cooper discusses the important but ignored place of Black Canadians in Canada’s history, both before and after Confederation. Most people are aware Canada was the terminus of the Underground Railway. Fewer know that Black refugees of the War of 1812, who settled in Nova Scotia, were encouraged by the government to return to their masters in the United States or remove themselves to Sierra Leone. In our celebration of the Canadian values of multiculturalism and diversity, says Cooper, we paper over the continuing racism faced by Canadians of colour today.

Finally, Clare Mian looks at Canada’s role in the creation of the State of Israel in 1948 (page 30), finding in the advice of Elizabeth MacCallum, Canada’s first female senior foreign policy advisor, the seeds of a more peaceful cohabitation in the region. Unfortunately, Mian writes, Canada’s image of itself as an even-handed and impartial international actor in that dispute is undermined by the actions of government representatives who ignored expert advice and principals of fairness in supporting a partition plan that could not but result in the dislocation and disenfranchisement of the Palestinian people.

Some Canada 150 events have impressively combined community-building goals with critical reflection on the country’s past. The government should be commended for funding such projects. On March 4, for example, I was fortunate enough to attend a performance of the Toronto Symphony Orchestra entitled Canada Mosaic. It featured two original compositions inspired by Canada 150 and partially funded by the Canadian government.

Andrew Staniland’s Reflections on “O Canada” After Truth and Recon- ciliation: Sesquie for Canada’s 150th featured discordant variations on the national anthem inspired by his feelings of shame and sadness when he learned about the TRC’s final report. In the concert finale, Inuit artist Tanya Tagaq, backed by the orchestra, performed Jean Martin’s Qiksaaktuq, an emotional and powerful vocal exploration of the five stages of grief, dedicated to the memory of missing and murdered Indigenous women and those who mourn for them.

Like these positive projects of commemoration, this special issue of the Monitor attempts to use the commemorative moment of Canada 150 to question today’s prevailing myths, be they of an Anglo-warrior nation leading through force and conviction (Harper’s view) or an open, multicultural, tolerant state where everyone is welcome and anyone can thrive (Trudeau’s view). It is inspired by the growing number of “active” historians in Canada who, by emphasizing the importance of the past to current events, hope to change things for the better in the here and now.