This is the third in a five part theme week marking the centenary of income tax in Canada.

Calm fiscal reasoning was hard to summon up amidst the intense emotions of 1917. Demands for taxes on profits, high incomes, and wealth were fuelled by anger that was about not only fair public finance,  but also broader patterns in the distribution of wealth. In 1917, Canadians got a federal tax on income – but wealth remained safe.

In fact, as Sir Thomas White’s political opponents would soon realize, in legislating the income tax at that particular moment, he had cannily helped big investors to an extra good return on some of their wealth, namely the large quantities of war bonds they would buy in the first Victory loan drive of November 1917. Income from those bonds would be tax-exempt. In the interwar debates about the future of the federal income tax, those tax-free bonds would play the role that “gold-plated government pensions” do today: a red flag of taxpayer resentment. Income tax controversies would continue to swirl and churn, in particularly Canadian ways.

Among the weirdly little known facts of Canadian tax history is that, until the big tax reduction budget of 1926, there were calls for Canada to abolish its income war tax. The tax had allies, though, in the MPs of the new Progressive Party. They persistently pressured the Liberal government to enforce it and to make it productive. After the Progressives lost seats and much of their political leverage in the 1926 election, income tax cuts flowed freely. By the end of the 1920s, federal taxes on consumption (tariff, sales, and excise taxes) had overgrown the federal tax terrain, leaving the income (and profits) taxes to supply only 15% of the federal revenue. Those who wanted to make the income tax history were active, and in Canada’s sister dominion, Newfoundland, those forces prevailed. Newfoundland got rid of its war income tax in 1924. In the U.S., the national income tax stayed. There, prohibition and a powerful, diehard opposition to sales tax made taxing income unavoidable. But precisely because of its importance to federal revenues, the U.S. national income tax was a political battleground. 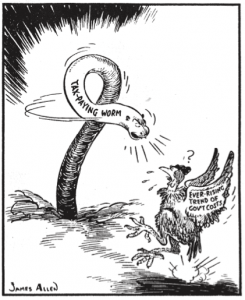 By the mid-1930s in Canada, no one was still seriously calling for income tax repeal. The pressures on public finance had become, again, too dire. And yet, no one thought Canada’s tax system was fair. Tax rage nearly tore Canada apart in the 1930s. Amid tax revolts and threats of tax revolts, Alberta went bankrupt, and Montreal teetered on the edge of insolvency. Most governments ramped up income taxes (cities and provinces, not just the feds), claiming their constitutional right to do so. Calls to throw out the constitution were heard throughout the land. While mass meetings erupted in cities, the provinces and the feds wrangled about the the division of powers. But at least as serious a revenue problem in the 1930s was tax evasion. In facing a problem of income tax evasion, Canada in the 1930s was not that different from the U.S., though the federal government’s response was feebler.

In his 1932 budget, Finance minister E.N. Rhodes made a great show of cracking down on tax evaders, but income tax evasion in Canada was nevertheless quite easy. P.E.I. was a well-known tax haven for wealthy Americans (as was Newfoundland). The American razor king, Joseph Schick, became Canadian to avoid U.S. income taxes. Senator Lawrence Wilson, a millionaire Quebec liquor wholesaler, raged against Canada’s rich tax dodgers, calling them “bloodless sharks” and unfeeling “human icebergs” who should be forced to “pay their dues to the nation.” Facing similar problems in the U.S., in 1937 President Roosevelt convoked a congressional investigation: “When our legitimate revenues are attacked,” President Roosevelt warned, “the whole structure of our Government is attacked. ‘Clever little schemes’ are not admirable when they undermine the foundations of society.” A former Secretary of the Treasury was prosecuted for tax evasion. 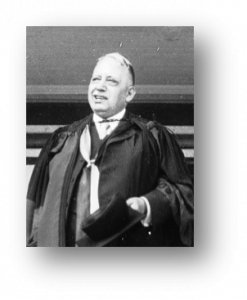 The fact is, before the Second World War, Canada didn’t need federal income tax revenues as much as the U.S. did. Canada, unlike the U.S., had a national sales tax. The sales tax saved the Dominion’s fiscal bacon in the 1930s when the income tax was so ineffectively enforced. And Canada didn’t have to go without booze taxes for 15 years after 1918. So gentle methods of enforcement were fine with Bennett and Rhodes.

Things got better after 1945. Canada got serious (or at least more serious) about income tax enforcement. And we also devised a means of sharing the national wealth through the system of equalization payments. Quebec secured a particular fiscal autonomy by creating its own, separate income tax system. But even during the 1950s, we relied less heavily on income tax revenue than the Americans did: sales tax played a big role in paying for Canada’s growing national welfare state, quietly and regressively. 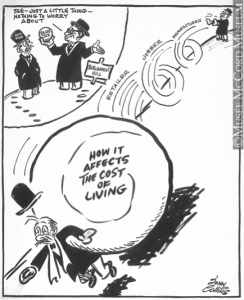 The Snowball Tax, by John Collins, circa 1952. © Musée McCord

Our national tax system depended less on the progressive-rate income tax. That fact made income tax less controversial than in the U.S. But there was more than a little complaining in Canada, and it was often ferocious.  Even in the supposedly peaceable 1950s, there was furious frustration among poor people who were paying income tax while ever-more-clever tax “efficiencies” were being discovered by the wealthy. Even among the wealthy, some tax professionals complained about having to work in a wild west environment, competing with cowboy-type tax practitioners. Calls for reform replaced quiet grumbling and dodging.

Then, in the late 1960s and early 1970s, efforts at tax reform triggered an explosively hostile reaction. The screeching over creeping socialism in that moment – the debate over the Benson White Paper in 1969-71 – was as loud as anything you’ve heard from south of the border. In 1970, as much as in 1917, a debate about fairness was not just about equitable distribution: it was about a whole raft of social changes and social identities. Even the FLQ manifesto took a shot at the feds’ “so-called social development tax.”

Canadians are not, contrary to our national myth, more happy than the rest of humankind to pay taxes. We regularly mix together questions of tax fairness and social justice, and that combination is always intense. We have sometimes allowed ethnic politics to contaminate our tax talk. But we can be grateful that, unlike Americans, our leaders don’t encourage Canadians to call their tax rage “patriotism.” Without that blowtorch of a rhetorical tool, our tax talk has at least a chance of being a nation-building conversation, not a shouting match.

Shirley Tillotson is an adjunct member of the Dalhousie University Department of History and an Inglis Professor of the University of King’s College. Her most recent book is Give and Take: The Citizen-Taxpayer and the Rise of Canadian Democracy (UBC Press, October 2017).