Given the recent debate in Canada about the commemoration of historical figures involved in the Indian residential school (IRS) system, including calls to remove names of historical figures from schools or buildings, it is important also to recognize the necessity of commemorating IRS sites. Acknowledging the legacy of the IRS system at school sites will not only contribute to the reshaping of public memory about Canadian history, but will also honour those that attended the schools and those who did not survive, and provide further education about the government and churches’ roles in establishing the IRS system as an assimilative tool.

In negotiations for the Indian Residential School Settlement Agreement (IRSSA), the largest class action settlement in Canadian history, commemoration was signaled out as an important priority for addressing the IRS legacy. Commemoration is one of the five components of the IRRSA, which also includes the Common Experience Payment, Independent Assessment Process, the Truth and Reconciliation Commission (TRC), and healing and health services. The TRC Final Report concluded that “ommemorations and memorials at former school sites and cemeteries are visible reminders of Canada’s shame and church complicity. They bear witness to the suffering and loss that generations of Aboriginal people have endured and overcome.”[1]

Earlier this week Ry Moran, director of the National Centre for Truth and Reconciliation, called on the federal government to do more to preserve the seventeen remaining IRS buildings that are still standing. Moran commented: “I think it’s really essential that we support community-led initiatives to preserve some of the remaining, standing residential schools so that we are unable as a country to forget this history.”[2]

Not all communities, however, want the buildings preserved. In Alert Bay, former students chose to demolish the St. Michael’s IRS building in 2015. Survivor Robert Joseph commented on the demolition: “It has been a constant reminder of the experiences…It really has cast a dark shadow for so long. Symbolically, it’s a liberation from the haunting past. Symbolically, it’s really important for the survivors because it allows us to have hope and optimism.”[3] While some communities have chosen to demolish remaining buildings, some IRS building have been repurposed. For example, the Mohawk Institute houses the Woodland Cultural Center that offers tours of the facility (and is actively fundraising to preserve the building).[4]

Moran says that even if communities choose not to preserve the remaining buildings, all IRS sites should have memorials “to ensure that the history of residential school is never forgotten or minimized.”[5] Whether IRS sites have become reclaimed or abandoned spaces, the TRC recognized the importance of the commemoration of IRS sites. The TRC’s 79th Call to Action calls “upon the federal government, in collaboration with Survivors, Aboriginal organizations, and the arts community, to develop a reconciliation framework for Canadian heritage and commemoration.” A component of the framework includes creating and implementing a plan for commemorating IRS sites.[6]

Under the IRRSA, $20 million dollars was set aside for community based, regional, or national commemoration projects. Between 2012-2014, the TRC selected 152 projects to be submitted for approval by the Aboriginal Affairs and Northern Development Canada. In total 143 commemoration projects were approved and funded.[7] One of the projects was a joint initiative by the Assembly of First Nations and the Aboriginal Healing Foundation to carry out the National Commemorative Marker Project (NCMP). The project was awarded $1,609,068 to place commemorative markers at the 139 IRRSA recognized IRS.[8]  Despite the initial momentum behind the NCMP, the goal to place markers at IRS sites was not accomplished. Due to logistical challenges and bureaucratic constraints, the NCMP steering committee decided to place markers in communities and not at all IRS sites. Trina Cooper-Bolam, project leader for NCMP commented on the choice: “This decision was made for several reasons including community preferences and lack of proximity to the IRS sites, inability to secure site permissions due to lack of mapping data, and the late award of funding from [Aboriginal Affairs and Northern Development Canada] and the corresponding shortening of the timeline requiring winter ground-breaking, an impossibility in most locations.”[9] Although the NCMP did not achieve its goal of marking all IRS sites, much can be learned from the project that could help a future similar project to navigate challenges. 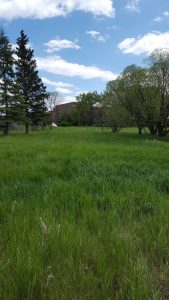 This picture is of the back of Birtle IRS. This was the closest I was able to get to the building. If you zoom in on the picture you can see a modern child’s swing set.

Some IRS sites do have commemoration markers, but not all. This past summer I visited three IRS sites  at Birtle, Brandon, and Portage la Prairie in Manitoba. What has become of the sites varied: the original Birtle IRS [10] building is still standing, Brandon’s IRS [11] building was demolished, and the Portage La Prairie IRS [12] building has been re-purposed. The locations of the sites are not easily found, nor are they searchable on Google maps. The National Centre for Truth and Reconciliation (NCTR) interactive map does mark all the sites, but does not provide GPS coordinates; however, I was able to obtain the GPS coordinates from the Manitoba Historical Society website. It is problematic that the sites locations are not easily accessible. It would be useful for the NCTR map to include GPS coordinates.

Before I arrived at Birtle IRS site, I knew that the building was still standing, but not maintained. In fact, in 2015 the Birtle IRS property made news when it was listed on Kijiji for sale by a private owner.[13] There was no road in to the building, so I got out of my car to see if I could walk closer to it. Seeing no way to get closer, I looked up the Birtle profile on the Manitoba Historical Society for additional information on gaining access to the site and discovered that “[t]he building and property were sold in mid-2016 and visits to the site are not permitted.”[14] There were no private property signs, let alone any signs identifying the property as the Birtle IRS. It is a shame that the Birtle land has fallen into private hands instead of being used as a site for commemoration, in which visitors could learn about the IRS system, and Survivors could be honoured. 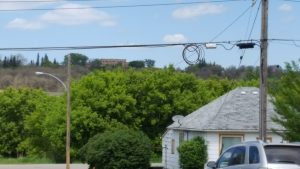 The Brandon IRS building was demolished in 2000. Once again using coordinates listed by the Manitoba Historical Society I sought to find the Brandon IRS site. Having no building to gauge if I was in the right place I drove past the site where the building had stood. Also, like Birtle, there was no identifying marker, signs, or plaque at the location of the Brandon IRS. I was also aware that there was a graveyard to the north of the site, so I tried to locate it; however, I had no GPS coordinates for this, saw no signs, and was unable to find it. Unless you were seeking out the Brandon IRS site specifically like I was there is no way a person would have known that the site was a former IRS.

While the Birtle and Brandon sites had no plaques or signs to identify the sites as past IRS’s, the Portage La Prairie IRS is a designated provincial heritage site, and in 2005 the Manitoba Heritage Council installed a plaque in font of the building. The Long Plain First Nation have repurposed the building, renaming it the Rufus Prince Building. Rufus Prince, a Long Plain First Nations Chief, was a Survivor of the Portage la Prairie IRS, a World War Two veteran, and helped found the first Indigenous police force in Canada.[15] Today, the Rufus Prince building is a financial, housing, and education centre, and also houses the Dakota Ojibway police. 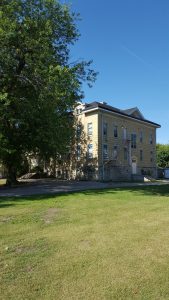 The plaque that stands in front of the former Portage la Prairie building, although recognizing that the building is a former IRS, does not address the IRS legacy. Instead, the plaque description states that the building was “the oldest existing example in Manitoba of a system of boarding schools” and focuses on the functionality of the school, stating that “the Portage school is a good example of prevailing ideas concerning residential school design. The building has grand and impressive facades, composed with a restrained classical vocabulary. Inside, more functional spaces provided rooms for girls’ and boys’ classrooms and dormitories, as well as recreation spaces, infirmaries and a variety of offices. The site, which like most residential schools was developed to provide instruction on farming and domestic work, still maintains its original quality.”[16] There is no recognition of the Survivors who attended the schools, or the students who did not survive, and there is no statement regarding the terrible treatment students endured inside the building described as “grand and impressive.” The plaque’s use of positive language to describe the functionality and design of the building, and lack of recognition of the IRS system as an assimilative tool by the church and government is problematic. 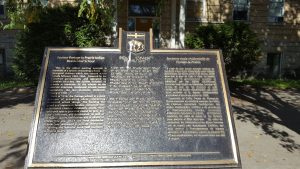 The Portage La Prairie IRS plaque was installed by the Manitoba Heritage Council in 2005.

As the description on the plaque is inadequate, it is important to mention that the Long Plain First Nations tribal council commissioned a commemorative eagle structure as a tribute to residential school Survivors. Although some members of Long Plain First Nation questioned the decision of the band to allocate money to such a structure, the eagle structure was commissioned in 2005 and erected in 2007. It was created by artist Jake Goertzen and weights 2,000 pounds, and at 26 metres it towers over the neighbouring trees in the area.[17] At the location of the eagle there is no sign stating the significance of the sculpture, but its proximity to the Portage la Prairie IRS building, and its design led me to think it was erected to honour IRS students, and upon further research I learned I was correct. When the statue was installed Long Plain’s Chief, Dennis Meeches, commented that “[o]ur message basically is that through the eagle and through the creator people have been able to survive.”[18] 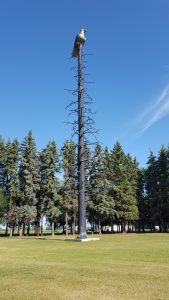 The eagle sculpture is located on Long Plain First Nation in Manitoba in close proximity to the Portage la Prairie IRS. It was created by Jake Goertzen and installed in 2007.

Although some IRS sites do have commemorative pieces, such as the Portage la Prairie IRS plaque and eagle sculpture, other IRS sites, like Birtle and Brandon, do not. The TRC’s 79th Call to Action for the development of a Reconciliation Framework for Canadian Heritage and Commemoration needs to be implemented by the federal government, in partnership with IRS Survivors and Indigenous organizations, to ensure that the IRS history and legacy is recognized and that students who attended the schools are honoured. As an important part of reconciliation, the commemoration of all IRS sites for future generations is essential to reshaping Canada’s history.

Carling Beninger is a doctoral candidate in history at the University of Saskatchewan.

[7] Truth and Reconciliation Commission of Canada, Honouring the Truth, Reconciling for the Future, 33.