Last week was the second annual Treaty Recognition Week in Ontario. Organized by the provincial government, this is a time for Ontarians to acknowledge and learn about the treaties upon which the province was developed. This year, Ontario’s Ministry of Education announced that Indigenous history and culture would become part of the K-12 curriculum by fall 2018.

A Wampum Belt Marking the 1764 Treaty of Niagara

In southern Ontario, treaty recognition is sorely needed. Here, the late-eighteenth and early-nineteenth-century treaties that enabled settlement on Indigenous lands remain poorly understood. Though individual First Nations, the Union of Ontario Indians, and the provincial and federal government all provide basic information about these treaties on their websites, most of these initiatives are relatively recent. From a comparative perspective, there are no parallel in-depth studies to the relatively vast literature on treaties elsewhere in Canada.[1] The most comprehensive resource that I have found remains Robert Surtees’s 1984 Land Surrenders in Ontario in addition to a handful of academic journal articles, doctoral dissertations and more local studies.[2]

This dearth of accessible resources is a problem. It suggests that in the most populous part of Canada, there exists only a rudimentary understanding of the legal foundations upon which Ontario developed. Here I do not just mean ignorance within the general population, but – given the absence of adequate contextual studies – also an ignorance in the institutions that draw on these types of resources such as the courtroom, the classroom, and the hallways of government.

In contemporary Canadian society, there exists a wilful ignorance of the Indigenous governance, economic, social and cultural structures fundamental to the treaty-making process. We could point to someone like Senator Lynn Beyak, as a clear example. Or former Nova Scotia Department of Justice lawyer Alex Cameron, who was fired from his post after filing a legal brief on behalf of the government declaring the Mi’kmaq a conquered people. And of course, there are well-known political pundit Tom Flanagan’s First Nations, Second Thoughts and Stephen Harper’s 2009 declaration that Canada was lucky because it had no history of colonialism.

These may be hyperbolic examples, but they are indicative of a broader trend. In his column last month in Canada’s History, Christopher Moore argued that Canadians need to start listening to Indigenous historians and that all Canadians – but especially the political classes – need to engage more deeply with them and their work. The material impact of his argument became clear when he cited a conversation with David Paul Achneepineskum, the CEO of the council of chiefs in the Ring of Fire:

“at the government level, with senior bureaucrats and middle management,” Achneepineskum lamented, “there is absolutely no knowledge of treaties. So there is no will at the political level to talk about treaties.”

Ignorance of treaties and Canada’s colonial past remains pervasive, it seems.

This needs to change. 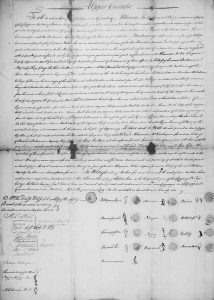 When I meet with Indigenous colleagues, friends or neighbours, or read books and articles by Indigenous scholars, I often hear about revitalization of languages and histories. First Nations are recovering the truths of their pasts; articulating continuities and survivances anchored in the Land and territory, and reawakening histories often glossed over by scholars.

These acts are important because much of the history in the lower Great Lakes was actively unwitnessed by those who recorded it.

The term unwitnessing is developed by literary scholar Drew Lopenzina in his book Red Ink: Native Americans Picking Up the Pen in the Colonial Period. The concept reflects how, in order to create memories in the present conducive to their goals, imperial and colonial actors – the primary creators of the archival record – “papered over” Indigenous agency, territory, culture, and community in the documents they created. For Lopenzina:

“Unwitnessing is not simply the conscious act of turning a blind eye. Nor is it the result, necessarily, of ignorance or an utter failure of imagination. Unwitnessing is the largely passive decision to maintain a particular narrative structure by keeping undesireable aspects of cultural memory repressed or inactive. For European explorers and settlers of the colonial period these undesireable aspects of memory consisted of repeated acts of denigration and violence towards Native peoples, which stood in sharp relief to the rhetoric of uplift driving so much of the colonial endeavor… This distortion inevitably manifests itself in the archival representation of the acts in question, in which undesireable knowledge is at once noted and then immediately stricken out, or unwitnessed.” (9-10)

Ontario’s history, specifically the absence of critical study of the lower Great Lakes treaties, is a product of this unwitnessing.

When I meet with settler colleagues, friends or neighbours, I often hear about the need for reconciliation with First Peoples. In the aftermath of the Truth and Reconciliation Commission, many people in Canada want to affect positive change that rectifies the longstanding injustices inflicted upon Indigenous peoples.

Too often, though, the Truth part of Truth and Reconciliation is set aside. In Ontario, when it comes to treaties, I’m not entirely sure we know yet what those truths are. Centuries of unwitnessing have left a legacy that remains to be uncovered and learned anew.

The Government of Ontario should be applauded for beginning Treaty Recognition Week (which was created with unanimous support in the legislature) and for introducing Indigenous history and culture into the curriculum. More, however, needs to be done and these efforts must extend beyond government. 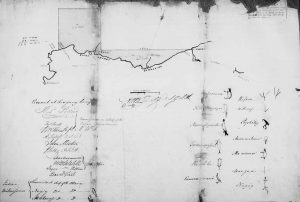 A survey of lands covered in the 1796 London Township Treaty

In southern Ontario, we need to start by listening to, and learning from, First Peoples when they bear witness to the pasts, presents and futures of this Land. Among many others, people such as Christi Belcourt, Leanne Betasamosake Simpson, Susan Blight and Hayden King and the Chippewas of the Thames demonstrate well the impact of colonialism on the Land and People, the changes that are needed in the present, and a hope and optimism for a future beyond the colonial legacies imposed by unwitnessed treaties.

Thomas Peace is an assistant professor of Canadian History at Huron University College and an editor at ActiveHistory.ca. He lives on land negotiated for in the 1796 London Township Treaty. If you live in North America, learn more about your treaty history here.