All accounts of returned travellers from strange lands and foreign shores are essentially self-disclosures and unwittingly autobiographical. – Norman Bethune

I invite you on a virtual tour of the Depression-era Soviet Union, in part through the eyes of Canadians who traveled there and, in part, through my eyes as I attempted to retrace some of their steps during a trip to Russia in 2014. In a series of posts over coming months, I’ll try to point out some of the sights they saw, look at what remains of them today, and what they might signify now a generation after the fall of communism. 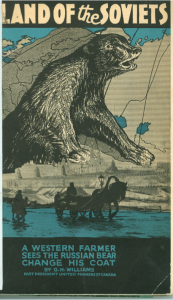 I’m sure that Bethune’s observation above, made at a speaking engagement after his return from the Soviet Union in 1935, applies to me. I have not spent sufficient time in self-reflection – or, as a Canadian Communist studying at the International Lenin School in the 1930s would have had it, engaged in an exercise of self-criticism – to discern exactly what my travels in search of Canadian interwar visitors to the Soviet Union unwittingly discloses about myself. Certainly, this ongoing journey has been a more complicated one than I imagined at its outset.

Studying Canadians who visited the USSR in the 1930s leads an historian across a broad sweep of Canadian society. Canadian visitors to the Soviet Union, who were far more numerous than I had anticipated, came from across the country, from farm and city. Some were rich and others poor. In age they ranged from high school students to retirees. They were men and women, reverends, rabbis, and atheists, and members of every political party. These diverse travellers visited the USSR for similarly diverse reasons, creating sharp difference in their field of vision. This virtual tour will bring us in contact with a fair number of them, from well-known figures such as Bethune, Agnes Macphail, Frederick Banting, and Hugh Maclennan to those whose lives are now more obscure in the historical record.

What did they hope to find in the Soviet Union and what did they find when they arrived there? The travelogues discussed in these posts – describing to Canadians the sites we will see on our virtual tour – were part of a public debate about the Soviet Union that was hotly contested in Canada over the course of the 1930s. Attitudes towards the USSR were a political litmus and its perceived successes or failures were deployed as weapons, left against right, right against left, left against left, and even right against right in those instances when some business interests favoured Soviet trade against those who were threatened by it.

These Canadian visitors were among the roughly 100,000 interwar international visitors who travelled to the USSR. Historians who have studied Western visitors to the USSR have analysed what Paul Hollander called the “techniques of hospitality” used by the Soviets to “lure and seduce” them. In most cases, Hollander notes, “visitors in the 1930s were deceived, not necessarily by staged events, fake settings, or the unrepresentative sampling of the sights, but by the overall image of Soviet life and society conveyed to them.”

When I began researching this topic, I thought I would come as close as an historian could to including what they call in science a “controlled variable.” So many Canadian visitors experienced the same sites/sights and “techniques of hospitality,” I thought that the variations in their responses must be attributable to their own dispositions and their experience of 1930s Canada. The longer I have worked on this project the more convinced I am that this idea was a chimera. A visitor’s political predisposition influenced the effectiveness of Soviet hospitality, but also significant was the objective reality of their experience there (regardless of whether that experience was typical of Soviet reality more generally). In 1932 and 1933, seeing evidence of famine and starvation, shaped the views of Canadians such as Ella Smith, Andrew Cairns, Arthur Lower and Jack Pickersgill. Yet J. King Gordon and Eugene Forsey travelled for nearly two months in the USSR in the summer of 1932 without, apparently, encountering widespread hunger and deprivation. Not only are there circumstantial differences in each visit – the historian Arthur Lower, for example, got his luggage stolen – circumstances in the Soviet Union changed so rapidly that where and when a visit occurred could produce markedly different impressions. As Saskatchewan farmer and CCF politician George Williams noted in 1931, “one of the great difficulties in presenting the Soviet picture is that it is a moving picture. What is on the screen today is in the waste paper basket tomorrow.”[1]

Many tomorrows and many waste baskets separated Williams’ trip and mine in May of 2014 when I went looking for traces of him and other Canadian visitors among the Soviet-era collections in the State Archive of the Russian Federation (GARF). I brought back with me what archival material could be located in two weeks exploring the records of VOKS – the All-Union Society of Cultural Relations with Foreign Countries – the organization that helped arrange tours for prominent Canadians. As Canadians were observing the Soviet Union, they too were being observed and sometimes VOKS tour guides recorded their impressions in frank terms. Of a 1938 group of Canadian students that included, notably, Professor Gregory Vlastos of Queen’s University, Kingston, the guide recorded the following observations:

A. Grant is very civil and reserved, no exclamations, no emotional excitement, which are so common for tourists. He takes notes during his visits of each site, rarely asks questions and is reservedly inquisitive.

Ellen Gentry is against the USSR. She is bored with objects/visited sites, not attentive. She is sarcastic about our reconstruction. She sang God save the King and hymns: she sang defiantly.

Gregory Vlastos is smart, sly, educated, widely-read. He asks more questions than anyone else. Does not believe in what is shown to him. Looks for refutations of offered explanations; tries to confuse those who answer his questions with his recurrent questions.

Rosa Terlin listens silently, visits all the sites because she will need to tell at home that she has seen what others have seen.

Fay Allan is talkative, flatters everything she saw. She hardly sympathizes with the Soviet Union.

These comments are hardly unbiased – VOKS guides tended to protect themselves in advance from being blamed for a critical travelogue about the Soviet that a less-than-sympathetic visitor might write upon return home – but they do give a contemporary account of visitors’ behaviour and first impressions. Was Ellen Gentry, singing defiantly, a more typical Canadian visitor than the civil Grant? The records I could locate are not comprehensive enough to draw conclusions of this kind. They are nonetheless useful when they can be correlated against retrospective travelogues in Canada and to the degree that they illustrate a range of responses to Soviet hospitality.

I will confess that during my ten days in Moscow it was outside of the archive’s operating hours that I felt closest to the visitors I was studying. I imagined myself sharing something of their experience, a tourist myself, limited by language, counting my rubles, fumbling along in the midst of a foreign culture. I was well aware that I was imperfectly following in their footsteps. I took a photograph that seemed like a metaphor for my search for them. They were off on the far right, out of my sight, looking up at the 1937 Soviet Pavilion with the statue of the young workers holding aloft the hammer and sickle, and here I was behind a barrier, with a distant glimpse of what they might have seen but needing to overlook the dumpsters and the McDonald’s between us. 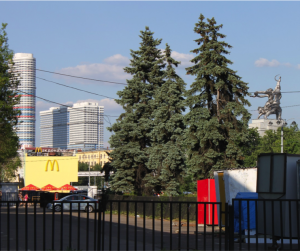 Nevertheless, I went to many of the sites within Moscow that were typical of the tours Canadians went on. Unlike me, interwar visitors did not confine their travels to Moscow. Universally they travelled more broadly in the Soviet Union, some quite extensively so, but Moscow featured in every visit I have uncovered.

I could only imagine their excitement at seeing not just a different culture but an emerging new society. The Soviet Union mattered profoundly to them, especially in the context of the Depression when a collapsed economy and the emergent threat of fascism made the search for social alternatives a pressing business. As Frederick Banting put it, “Surely, there must be something to learn from the USSR that would help to solve the difficulties of capitalist countries.” George Williams was more dramatic, writing “I believe that in the success or failure of the Russian experiment lies the future history of the world.”

The “Great Experiment” certainly shaped the history of the 20th century and its failure continues to shape the 21st. Looking back as these visitors drew contrast between what they understood to be the norms of Soviet society and those of Depression-era Canada gives a glimpse of what possibilities or terrors an alternative social order offered Canadians in a time of acute social crisis. If, in some cases, their retrospective naiveté ought to serve as a considerable caution, their optimism retains, for me at least, recoverable traces of inspiration. In the following posts, we will follow some of these travellers from Red Square to tractor factories, from prisons to fancy hotels. What is presented is by no means a complete portrait of either Moscow in the 1930s or 2014 as seen through Canadian eyes. We will find as Agnes Macphail did in 1936 that “Russia is a puzzle, a provoking sort of puzzle. Just when you think you have the thing going together, you find a few pieces that simply won’t fit in.”

[1] George H. Williams, The Land of the Soviets: A Western Farmer Sees The Russian Bear Change his Coat (Saskatoon: United Farmers of Canada, 1931), 13.

One thought on “Moscow Then and Now: A Virtual Tour In Search of Depression-Era Canadian Visitors to the Soviet Union”