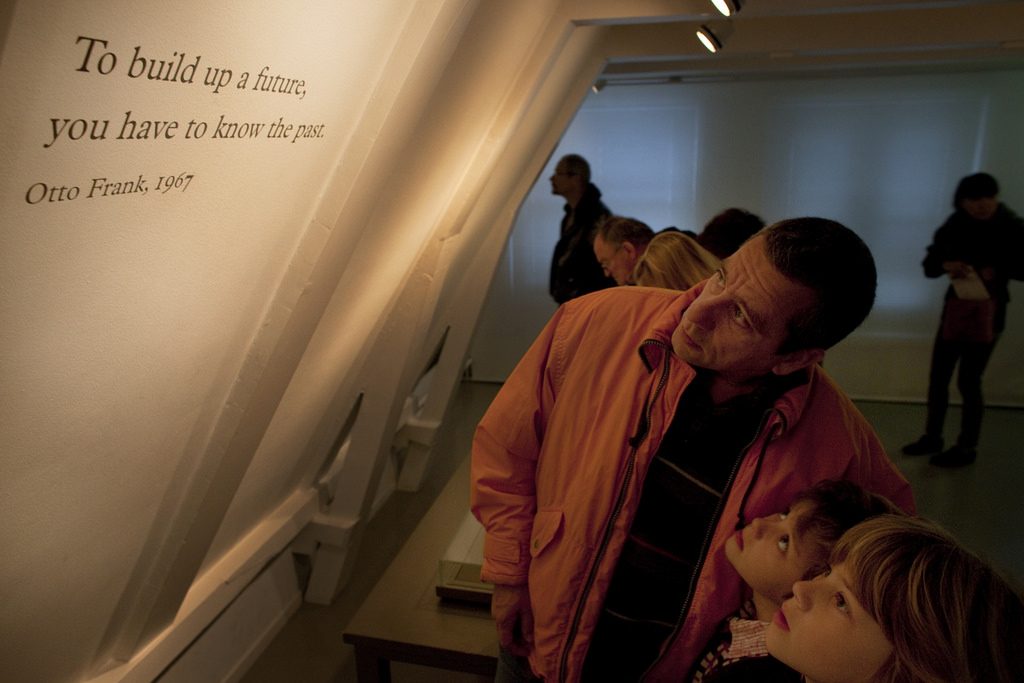 There is an ongoing debate in the field of public history regarding the acceptability of taking photographs in museums. Though history museums seem to be leaning more towards allowing or even actively encouraging photography in their galleries, there are many who object to this phenomenon. Open up any think piece about Millennials and you’re sure to see complaints about those of this generation (of which I am a member) being glued to their phones and constantly taking selfies. Selfies in most history museums seem to me to be fairly unobtrusive. Usually it only takes a few moments for people to pose in front of an interesting scene or artefact and snap a photo or two of themselves or a group of friends.

Many museums are leaning into this. Some museums (including “made-for-Instagram” museums like the New York Museum of Ice Cream or California’s Museum of Selfies), have dedicated “selfie areas” where visitors can pose in or around replica artefacts, try on period costumes, or pose with mannequins representing important historical figures. Photography in many museums is seen as a way to attract and engage visitors (especially younger visitors) and make them active participants in the museum instead of passive observers.

Photography in art museums has been discussed repeatedly, but debates have focused on the damaging influence of flash photography, the interference of photographers on the aesthetic experiences of visitors, copyright concerns, and the concern that those who photograph art see it through a lens, rather than with their own eyes, lessening their own appreciation. But history museums have their own set of issues to grapple with. There may not be such issues associated with many museums or heritage sites, but what about somber or traumatic sites of history? The Anne Frank House Museum in Amsterdam, for example, explicitly bans all photography out of concern that cameras could interrupt visitors’ emotions in the site. Their website also lists preservation of the building as a concern. But certainly, in a place closely tied to the Holocaust, the emotional experiences of visitors should be considered.

Consider sites such as the Auschwitz-Birkenau State Museum. In an age of rising global antisemitism, reminders and proof of what has previously happened are important. Photographs can leave visitors with more concrete reminders of a site than just memories, and photographs can be much more easily shared with others. However, this leads to the issue of appropriate behaviour in photographs.

In late 2017 a rash of news articles popped up condemning the act of taking “selfies” at Auschwitz. The issue in many of these newspapers seems to have been less to do with the taking of selfies themselves and more to do with the behaviour of the people in the photographs. Many were smiling. Other photographs were taken of visitors posing at the infamous train tracks and posted online with the hashtag #squadgoals. In another case, a British man posed giving a thumbs up in a barracks building at Auschwitz, raising the ire of many, especially the families of Holocaust victims and survivors.

But what can be done about this? A call to ban selfies was common throughout these news articles, but many of the offending photographs were not selfies (perhaps part of the issue is a lack of understanding of what constitutes a selfie. Selfies are photographs people take of themselves, usually with smartphones). Many others called to ban photography at the site altogether.

Art museums have lamented the difficulties of banning photography in this age of tiny cameras and cell phones. Surely guards have better things to do than police phone use, and it is very easy for visitors to discretely take a photograph under the guise of sending a text message. How many guards would be required to prevent photography at a site as large as Auschwitz, and what would be the penalty for taking such prohibited photos?

But if photography remains permitted at such a site, can anything be done to minimize disrespect? Imogen Dalziel in her 2016 article “Romantic Auschwitz” surveyed sixteen people whose Instagram photos of Auschwitz had been shared by the heritage site in the previous five years, and examined their attitudes, emotions, and motivations. What she found was that what may seem from a distance to be insensitive (taking a photo in a gas chamber, for example), was actually motivated by a need to share what was experienced, a need to distance oneself from a traumatic experience (placing a lens between viewer and experience), or an effort to humanize victims and sympathize with what they experienced. Notably, all but one person she surveyed agreed that selfies at Auschwitz were inappropriate.[1] Of course, sixteen is a small sample size and all visitors were English speakers, mostly from Britain, so her findings cannot be universalized.

So, what can be done? Museums can hardly police the facial expressions visitors make in photographs, nor can they control which hashtags are used in social media posts about the experiences. Banning photography may place an unnecessary strain on staff resources and could potentially widen the gap between those who have witnessed first-hand what concentration camps and death camps look like today and those who have not had such opportunities. Bearing witness, as mentioned earlier, is one of the benefits of photography after all.

It seems that it must be an all-or-nothing situation. Either visitors should be allowed freedom to do whatever they like with their cameras or not be allowed their cameras at all. The grey areas are certainly difficult to enforce.

The United States Holocaust Memorial Museum’s website lists guidelines for photography for both media and visitors, including a request that visitors be respectful when taking photographs, but does not place any restrictions on photography in the museum. This is relatively new, as prior to 2014 the use of cell phones was prohibited in the museum galleries, as was photography. The museum explained to the Washington Post that they decided to allow photography in an attempt to engage younger visitors.

A ban on photography does little to address the underlying issues of visitors behaving disrespectfully in sites. It does nothing to change the fact that many visitors view sites such as Auschwitz as Instagram opportunities rather than places of memory and deep emotion for many. And who is to determine what is a respectful photograph or a disrespectful one? Some will find any photographs taken at certain sites to be inherently disrespectful while others, such as the one individual in Dalziel’s article who approved of selfies, feel that people just “need to get a grip” and relax.[2]

Public education may be one way to encourage respectful behaviour at such sites. Giving visitors concrete examples of unacceptable behaviour and providing ways for visitors to respectfully work through their emotions and express the discomfort they may be feeling at a traumatic site could go a long way towards mitigating inappropriate actions and providing a more comfortable visitor experience for all.

Kaiti Hannah is a Curatorial Assistant at the Western Development Museum’s Curatorial Centre in Saskatoon. She holds an MA in Public History from Western University.