Last month we released RRR poster #17 by Orion Keresztesi and Kassandra Luciuk that looks at Canada’s internment of Ukrainians, 1914-1920. The poster makes connections between the past and present and grapples with timely issues such as immigration, law, and racism.

Between 1914 and 1920, the Canadian government used the War Measures Act to intern 8,579 people, including 4,000 Ukrainians, all recent migrants from the Austro-Hungarian Empire. Passed on 22 August 1914, after the outbreak of World War I, the act empowered the government to administer the war without accountability to Parliament or existing laws. With its new powers, the government arrested, detained, censored, and deported thousands of people identified as “enemy aliens.” Approximately 80,000 others were forced to register and report regularly to local police. Their freedom of speech, movement, and association were restricted. As well, anyone who arrived after March 1902 was disenfranchised, so as to prevent them from voting against the ruling Union Government.

In part, internment was an extension of the widespread prejudice and discrimination that dominated Canada in the early twentieth century. Public opinion towards Ukrainians and other Eastern European migrants ranged from outright hostility and xenophobia to more “progressive” calls for swift assimilation. Indeed, these migrants found themselves on the wrong side of contemporary notions of whiteness and were thus easy targets for discrimination. Meanwhile, Canadian capitalists used these same people as cheap sources of labour. They farmed, worked in the mining industry, and helped build transcontinental railways that greatly facilitated capitalist accumulation in Canada.

Internment began almost immediately after the passing of the War Measures Act. Many Ukrainians were interned because of so-called patriotic dismissals: workers and bosses agitated for their dismissal to make room for “loyal” Anglo-Canadians. Some were interned for protesting employment discrimination or unemployment. Privy Council 1501 had given the government the power to apprehend anyone found impoverished or without work. In other cases, the reasons for internment were unclear. In several cases, men were simply stopped on the street – without cause – and interned.

Daily life in the internment camps was difficult. Internees were required to build their own prisons and work on land-clearing, road-building, woodcutting, and railway construction projects. In Western Canada, internees were forced to build national parks, cut trails, and even build a portion of a golf course in Banff, Alberta.

By and large, internees responded to the ill treatment and exploitation they experienced with insubordination and resistance. They engaged in sabotage, like work slowdowns, and, in some instances, rioted or struck for better conditions. Many tried to escape, and some even succeeded. In total, 107 internees died during the operations from trying to escape, work-related injuries, infectious disease, and suicide.

Beginning in late 1916, the government granted many internees parole to fill wartime labour shortages. The parolees, however, were not free. Instead, they were forced to work against their will in dangerous industries, such as mining and railway construction, and they remained subject to surveillance and reporting.

The release of these internees coincided with the beginning of a second wave of internment in the aftermath of the Russian Revolution. This wave specifically targeted labour activists and socialists. Many people were eventually found guilty of being “Bolshevik aliens” and deported directly from the camps.

Ukrainians were once again well represented amongst those rounded up after 1917, heightening their reputation as “radical aliens.” This notion was not entirely without merit. The revolution was widely celebrated within the Ukrainian Social Democratic Party. But the radicalization of Ukrainians was also part of a larger pattern of worker militancy across Canada that peaked in 1919. Troubled by the deterioration of wages and the threat of unemployment, Canadian workers from all backgrounds turned to militant industrial unions for protection and advocacy. Unlike the early years of the war, when perceived political unrest could be blamed on the propaganda of German or Austrian enemy agents, the government now targeted the working class more generally.

A better understanding of the history of Ukrainian internment sheds light on the Canadian government’s long history of unjust treatment of immigrants it deems undesirable racialized “others.” In the case of Ukrainians, state officials saw the internees as nothing more than bodies to be used to build the country but not join the nation. There were many paths to internment – bad luck, poverty, unemployment, political activism – but all internees shared the commonality of being marked as disposable. Rather than view internment strictly as a project of ethnic oppression – although it was that, too – we need to see it as a key part of Canadian nation-building. The internment of Ukrainians and other people labeled “enemy aliens” during and after World War I was not a regretful anomaly. Interment reflected the regular functioning of the Canadian state and its unjust practices. These practices continue today with the undue detainment of many migrants and the exploitation of temporary foreign workers. 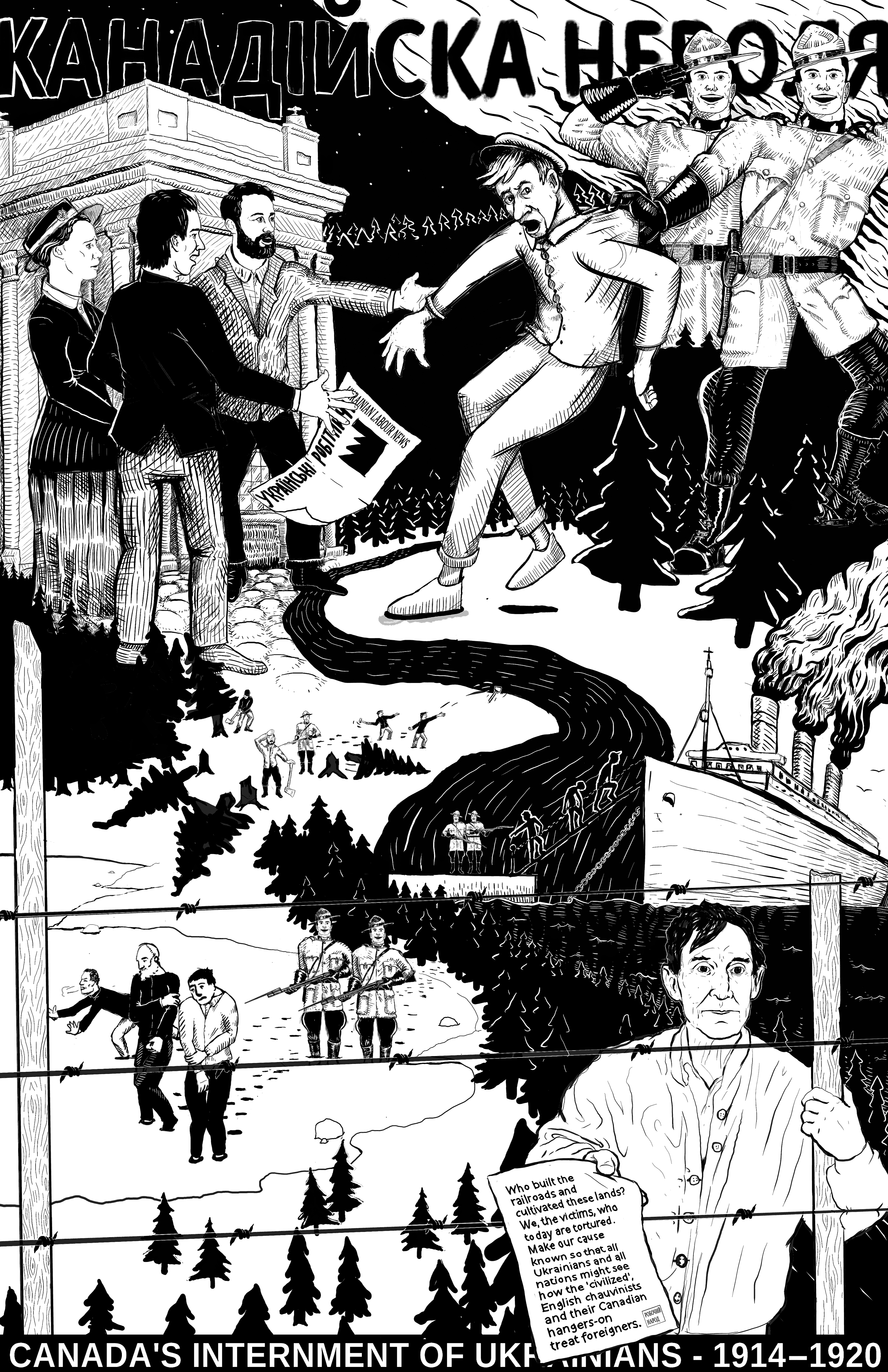 Orion Keresztesi is an artist and activist inspired by the history of working people’s struggles – how they have shaped the world we live in and how they can help us to do the same today. He works as a research and policy analyst for the Nova Scotia NDP caucus. He is a member of SEIU Local 2.

Kassandra Luciuk is a Ph.D. Candidate in History at the University of Toronto. She currently holds the Corsini Fellowship in Canadian History at the L.R. Wilson Institute for Canadian History at McMaster University. Kassandra’s research explores the shaping of cultural hegemony within the Ukrainian Canadian community during the Cold War. She is also working with Nicole Marie Burton to produce a graphic novel about internment in Canada during World War I.