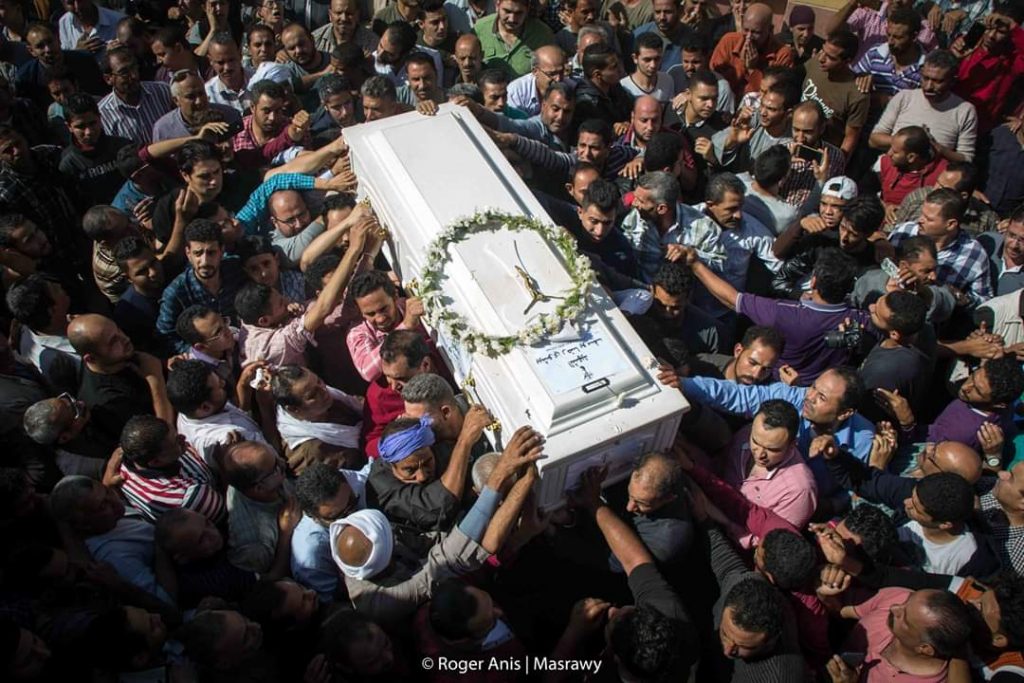 On November 2, Islamist gunmen opened fire on a bus leaving the St. Samuel Coptic Orthodox Monastery in Upper Egypt’s Minya governorate, killing at least seven Coptic Christians and injuring 16 others. The attack is similar to another one that took place in May 2017, when gunmen opened fire on buses transporting Coptic Christians to the same monastery for prayers and pilgrimage, killing 28 people.

Following Friday’s attack, international media largely situated the violence within a context of Coptic Christians’ presumed wholesale support for Abdel Fattah al-Sisi’s regime. Such narratives not only attempt to posit the attack as an isolated or exceptional incident, but also reduces Copts to homogeneous supporters of a regime that provides them with “special protection,” and yet perpetuates their continued exclusion, persecution, and death.

A New York Times article by Declan Walsh and Mohamed Ezz, written on the same day as the attack, is emblematic of coverage about Egypt’s Copts by Western media. The language deployed by such articles suggests that all Coptic Christians support Sisi’s regime, and hence are partially responsible for the atrocities committed against them.

This numerical and religious minority, numbering between eight to 10 percent of the total population in Egypt, are often painted as avid supporters of the regime. Despite government intransigence over discriminatory church-building laws — less than one percent of churches and religious buildings submitted for government approval in early 2017 have been accepted — Islamist groups use the erroneous claim that Copts support Sisi and the military regime in return for a degree of protection.

As the authors of the New York Times piece highlight, Sisi has consistently said he “has put security concerns at the heart of his autocratic style of rule,” which is pure rhetoric. Sectarian attitudes also have a long and deep history in the country and do not need “the Islamic State’s campaign to sow sectarian divisions,” as the writers state.

Nationalists, Islamists, and Church reform movements in the nineteenth century helped to lay the groundwork for an emergent national identity that increasingly drew distinctions between Christians and Muslims in Egypt. Western intervention, in the form of British occupation and later United States imperialism, further entrenched such movements and engendered a more nationalistic, ethnic-based character in the service of nation-building. Categories of “minority” and “majority” peoples emerged further from these attempts to define the modern nation state and to delimit its boundaries.[i]

As noted scholar and feminist theorist Saba Mahmood argued, by the turn of the twentieth century, the state and its attendant institutions had brought religious life under new forms of regulation, and ultimately exacerbated religious differences. Sectarian identity thus became “sutured” to religion by the state, and thus subjected “to a new grid of intelligibility,” so that majoritarian religious prejudices in the state could not be easily separated or named.[ii]

For parallel developments, one could think of systemic racism in North American societies to understand how such a position naturalizes institutionalized discrimination by Egypt’s Muslim majority toward its Christian minority. As scholars and social activists have long observed for racialized minorities and Indigenous peoples in Canada and the United States, such virulent discrimination had the added consequence of producing a reduced identity among Egypt’s Christian populations.

This marginalization of Coptic identity is typified by 1920s liberal politics, when Makram Ebeid Pasha pronounced that he was “Muslim by country and Christian by religion.”[iii] A reduced identity means that you must denounce what sets you apart in order to be accepted and acknowledged. Yet, even if you are accepted, you must manage your emotions, your actions, and people’s expectations. It becomes your responsibility to be a spokesperson for an entire group. It becomes a story of fearing to disappoint those who expect the worst from you.

As a reduced identity comes to mean always having to justify your success and your actions, the church came to serve as a refuge and a place for social networking; it provided a communal gathering space in support of opportunity and financial growth. As Coptic civil society expanded in the 1940s, a new generation of lay Sunday school leaders entered monasteries and worked within the church to regulate and expand social and spiritual services. A large proportion of Copts came to rely on the church more than ever.[iv]

As in United States racial politics, there developed an inherent shaming of Coptic Christians in Egyptian discourse. You are allowed to be Coptic, and you are allowed to be successful, but you cannot be both. Otherwise, you risk raising the ire of mota’asibeen (bigoted factions) within the Muslim majority, who then feel threatened by the prospect of kafara (heathens) having power over them. In forty oral history interviews with immigrants who left Egypt between 1952 and 1975 to Canada and the United States, Copts shared with me vivid memories of discriminatory hiring practices in graduate departments and private sector employment, which led many to emigrate to Western countries.

After years of exclusion by the regime of Gamal Abdel Nasser and outright discrimination under Anwar Sadat, increased segregation became more prevalent in places of worship, social gatherings, and decisions about with whom to interact and do business. One’s name, as much as the cross tattoo on their wrists, became a badge and marker of difference.

Economic stagnation and state securitization under Hosni Mubarak led to the 2011 revolution, which sparked brief fires of hope. Yet this quickly faded with the Muslim Brotherhood’s ascendency to power, and utter failure once they achieved it. Such developments have only exaggerated historical divides in the country, leading to almost constant sectarian attacks by Egypt’s Islamic State affiliate and other homegrown militant movements since the 2013 military coup.

The regime’s usual response to such attacks? A period of national mourning, platitudes of “we are all Egyptian,” and then silence. When individual attackers are named and arrested, justice is short-lived. The state imposes traditional reconciliation with obligated church support, which often leads to little more than a slap on the wrist for the perpetrators.

What Egypt needs today is not a “benevolent” dictator touting the language of protection. We do not need more guns, more walls, and more soldiers dying. Egypt needs a government willing to support and elevate those who are destitute, who have the least access to resources, and therefore are most likely to support fundamentalist organizations. Education, social welfare, community outreach, and a renewed emphasis on infrastructure are vital to developing a language of inclusion.

This is very much a story distinguished by Egyptian history. Yet Egypt is far from unique. The Middle East is not inherently more dangerous, or more violent, than anywhere else. In recent years, as Lucie Ryzova writes, “the global rollback of authoritarianism has shattered western countries’ long-standing claim to normalcy (or positive exceptionalism).”[v] The killing of 11 Jewish worshipers in a Pittsburgh synagogue on October 27 serves as a stark reminder. The New York Times has been all-too-vocal in pronouncing that the gunman who opened fire in a house of worship was fueled by Donald Trump’s anti-Semitic and xenophobic rhetoric. Yet while appropriately denouncing such hateful acts and the vitriol of their own president, United States media continues to perpetuate false Egyptian state rhetoric and a centuries-long orientalist vision of the Middle East and its peoples.

Stop blaming the victim. These atrocities do not happen in a vacuum. To say otherwise is to insult the memory of the deceased. 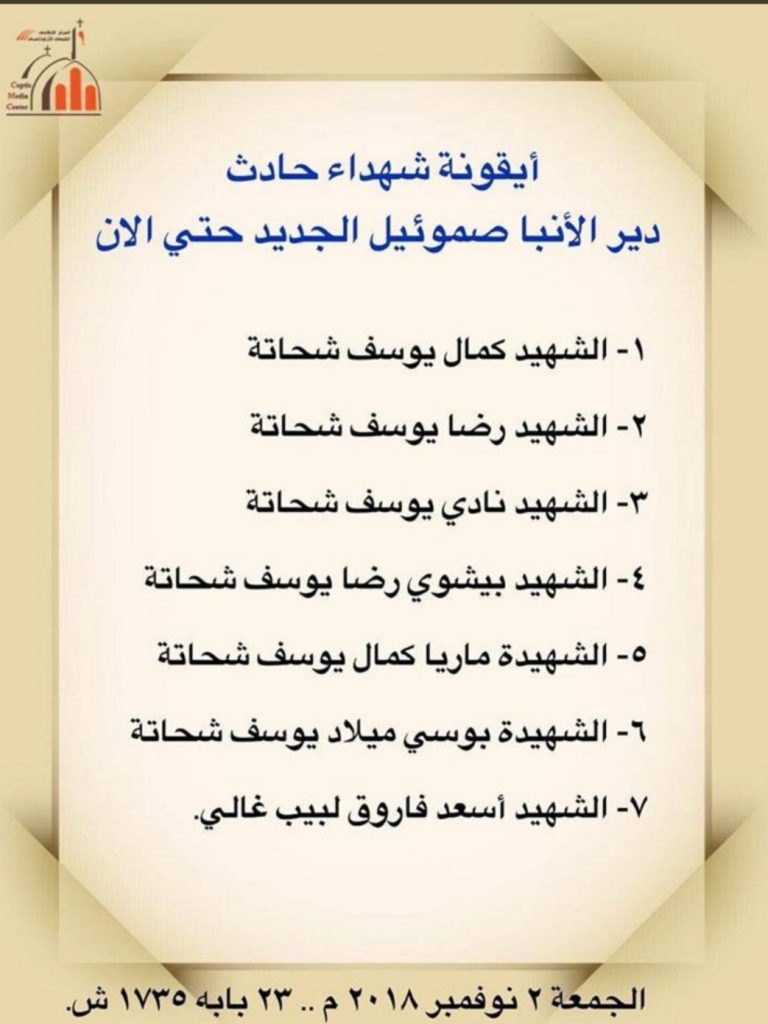 List of casualties released by the Coptic Church Media Centre 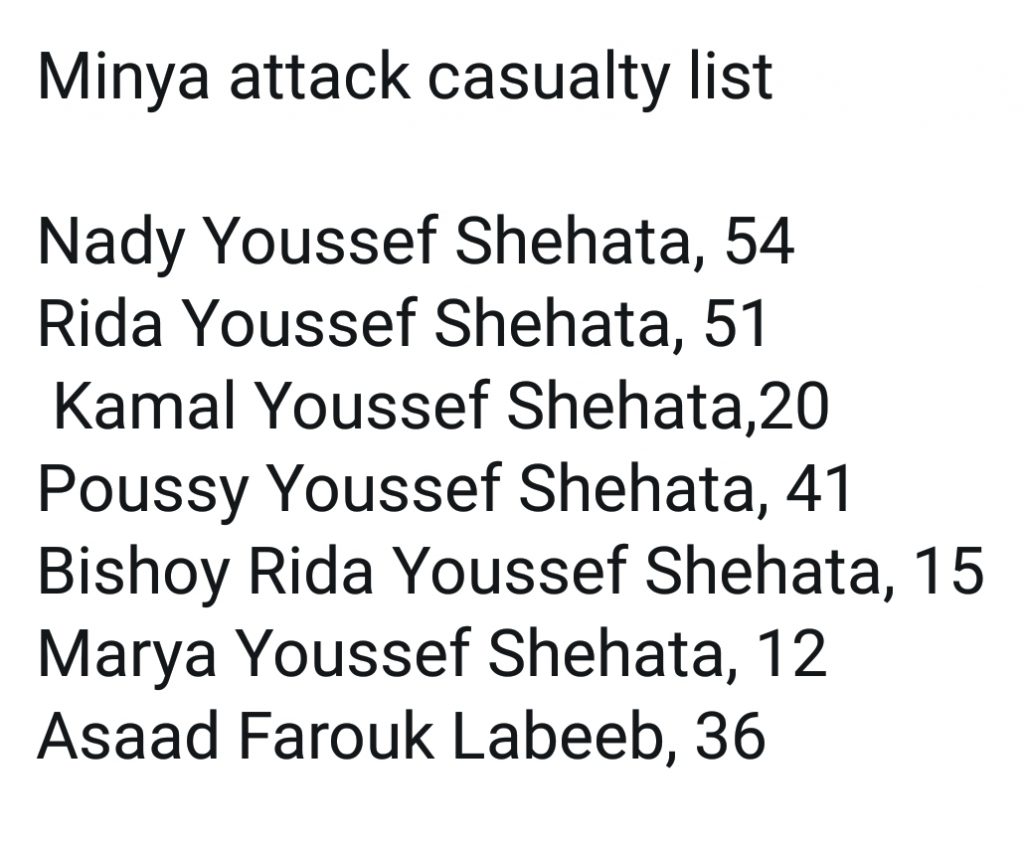 Michael Akladios is a doctoral candidate in history at York University. He is the founder and project manager of the Coptic Canadian History Project (CCHP), a not-for-profit public history and community outreach organization affiliated with the Department of History and the Clara Thomas Archives and Special Collections at York University.

[iv] Due to the limitations of this article, I gloss over inter-communal tensions and fracturing over Church politics and Church-State relations. For an introduction to this history, see: Mariz Tadros, Vicissitudes in the Entente between the Coptic Orthodox Church and the State in Egypt (1952–2007), International Journal of Middle East Studies 41.2 (2009): 269-287.

[v] Lucie Ryzova, “New Asymmetries in the New Authoritarianism: Research in Egypt in the Age of Post-Revolution,” International Journal of Middle East Studies 49.3 (2017): 511-514.