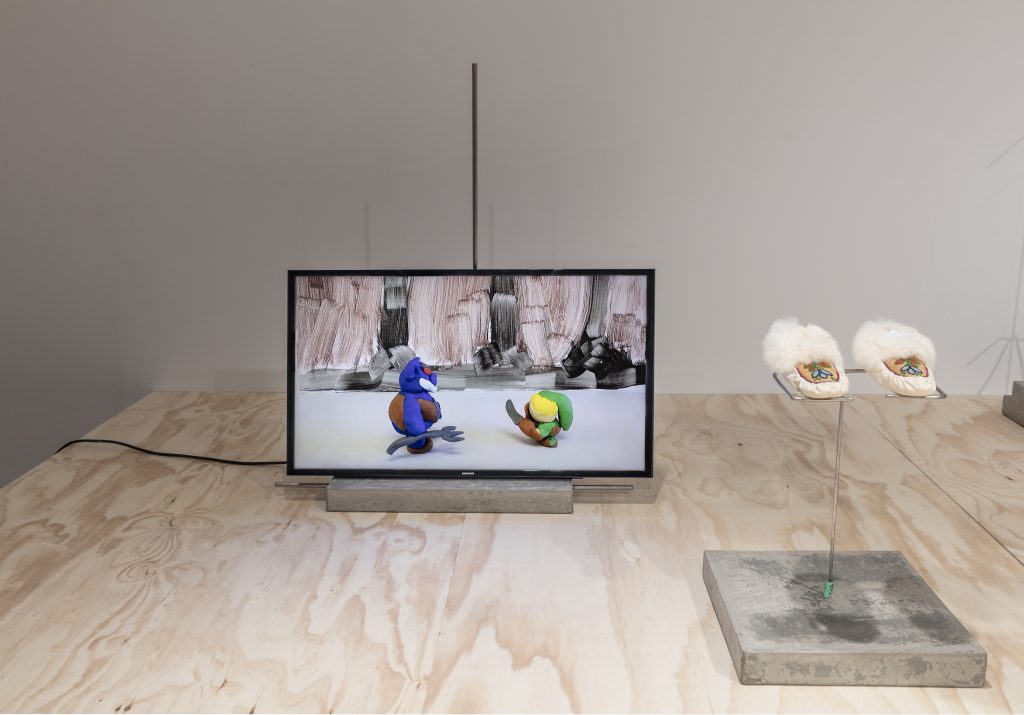 Duane Linklater with Ethel Linklater and Tobias Linklater, From Our Hands (installation view), 2016.

When I was a little girl I can remember my grandmother in the house
on the reservation. It had a big sun parlour and the walls of that sun
parlour were hung with all these Indian things … When the Duke and
Duchess … came the Indians dressed up in clothing from the collection
because they didn’t have their own ceremonial robes anymore. My
grandmother frequently lent the stuff out. Then the Indians would bring
it back to her.[1]

When one thinks of personal connections to museum collections, one may think of individuals or families who acquire and donate significant collections to museums, particularly as a means of legacy building. In these narratives, often objects are passed down from one generation to the next, and then eventually donated to an institution for posterity. Indeed, as illustrated in the quote above by the granddaughter of early twentieth-century Alberta settlers O.C. and Elizabeth Edwards, some privileged collectors can have deeply paternalistic and colonial attitudes towards the acquisition of objects. Their stories and legacies are often regarded as a positive step towards the preservation of culture, despite their sometimes dubious roots.

In terms of understanding familial relationships and collections, there is another way to reframe the ways in which family dynamics are embedded in museum collections.  The very artists and objects represented can often show how familial relationships are integral to articulating how a style or a way of working has become a prominent art form. This dynamic can often be seen with Indigenous artists who have passed down their art practice to their children or relatives as a way to maintain cultural knowledge. As Anishinaabe writer and journalist Tanya Talaga writes, “In Indigenous cultures, family units go beyond the traditional nuclear family living together in one house. Families are extensive networks of strong, connective kinship; they are often entire communities.”

These kinship ties are integral to the preservation of art forms that have been banned and sometimes subject to outright theft. For example, Kwakwaka’wakw hereditary chief and master carver Mungo Martin (1879–1962), passed on his carving skills to his grandson Tony Hunt Sr. (1942–2017), who then taught his son Tony Hunt Jr (1961–2017). The work of Inuit artist Pitseolak Ashoona (1904–1983) and daughter Napachie Pootoogook (1938–2012) would have profound impact on the work of granddaughter and daughter Annie Pootoogook (1969–2016). The type of narrative frankness found in Annie’s work was directly inspired by her mother Napachie’s depictions of the lives of women. M’Chigeeng First Nation artist Carl Beam (1943–2005) created ceramic and collage work alongside his wife, Ann Beam. Their daughter, Anong Migwans Beam, is also an artist in her own right. These are just some of the many Indigenous artists who have shared and connected their work for future generations. In many cases, most of these artists are represented in museum collections alongside their relatives.

Another familial connection was one that was unexpectedly uncovered in 2014 by the staff at the Thunder Bay Art Gallery: the relationship between Moose Factory maker, Ethel Linklater (1932–2004) and Omaskêko Cree, artist Duane Linklater. As the gallery began its digitization process, which included contacting artists for permissions, it learned that Ethel was Duane’s grandson. Since 1976, the Thunder Bay Art Gallery has served the vast region of Northwestern Ontario; its small yet robust collection of contemporary Indigenous art and material culture (1960s–present) largely represents living artists. However, the nature of the donation to the Thunder Bay Art Gallery by the Province of Ontario in 1985 provided limited detailed information on the individuals who composed the “From Our Hands” collection (which toured across Ontario from 1982–1984).[2] A subsequent exhibition at Mercer Union in 2016 (also titled “From Our Hands”) explored the direct institutional impact on Duane’s familial relationships. Using his grandmother’s handmade moccasins and gauntlets alongside his son Tobias’s work as well as his own, the exhibition examines the nature of collections by considering “the internal language of walls, what is said and unsaid, spaces for the Indigenous body, and how such spaces of inclusion can be extended.”

The familial relationships that people have with museum collections can certainly shape the dynamics of the institution. These relationships have long-lasting implications in terms of donations, collections, and broader institutional identity. Within museum collections, the network of artists and their relations also matter; though not always as visible or known, this transfer of knowledge—in terms of both conceptual approaches and technical practices—continues to be housed within museums. They make for a compelling story on how Indigenous practices, long suppressed across the land currently known as Canada, continue to be shared, taught, and circulated among family members. In a recent article on UK museum collections, independent art curator Alice Protector reminds us that “there’s no such thing as a free object, and every piece in a museum has been moved from its original context.” Even works that are lawfully acquired and locally-focused can still tell us “stories of trade and networks of power,” she says. Museums must recognize and address these deeply personal, and sometimes unseen, histories; they are connected to our own identities, communities, and the places we live.

[2] Organized and circulated by the Province of Ontario, the From Our Hands exhibition and tour featured the work of Indigenous artisans from across the province. In addition to touring to First Nations Reserves, the project also hosted workshops with the intent to foster creative practices of Indigenous makers. Upon the conclusion of the tour, the significant donation of objects were gifted to the then recently opened Thunder Bay National Exhibition Centre and Centre for Indian art.