Workers in Amherst, Nova Scotia milled around the gates to the sprawling yards of Canadian Car and Foundry railcar building shops. They were hearing union leaders report on the company’s refusal to give Amherst workers the same contract they had signed with workers in Montreal. There would be no union recognition, no nine-hour day with ten hours pay, no wage increases, no commitment to consult workers before changing work rules.

Calls for action punctuated the air, and workers “formed in a parade, marching through the principal streets of Amherst” to their meeting hall. Joined there by workers from Amherst’s seven other major factories, they cheered the call for a general sympathetic strike. Meet the demands of the railway car builders and negotiate contracts in Amherst’s other factories, the workers demanded. When put to a vote—one member, one vote—the motion to launch a general strike the next morning won strong support.

On the morning of 19 May, Amherst workers—skilled and labourers, women and men, union and non-union—shutdown the town’s industries. Even the mechanics in the local garage went on strike. It was a community strike, just like the one that had started four days earlier in Winnipeg, Manitoba. 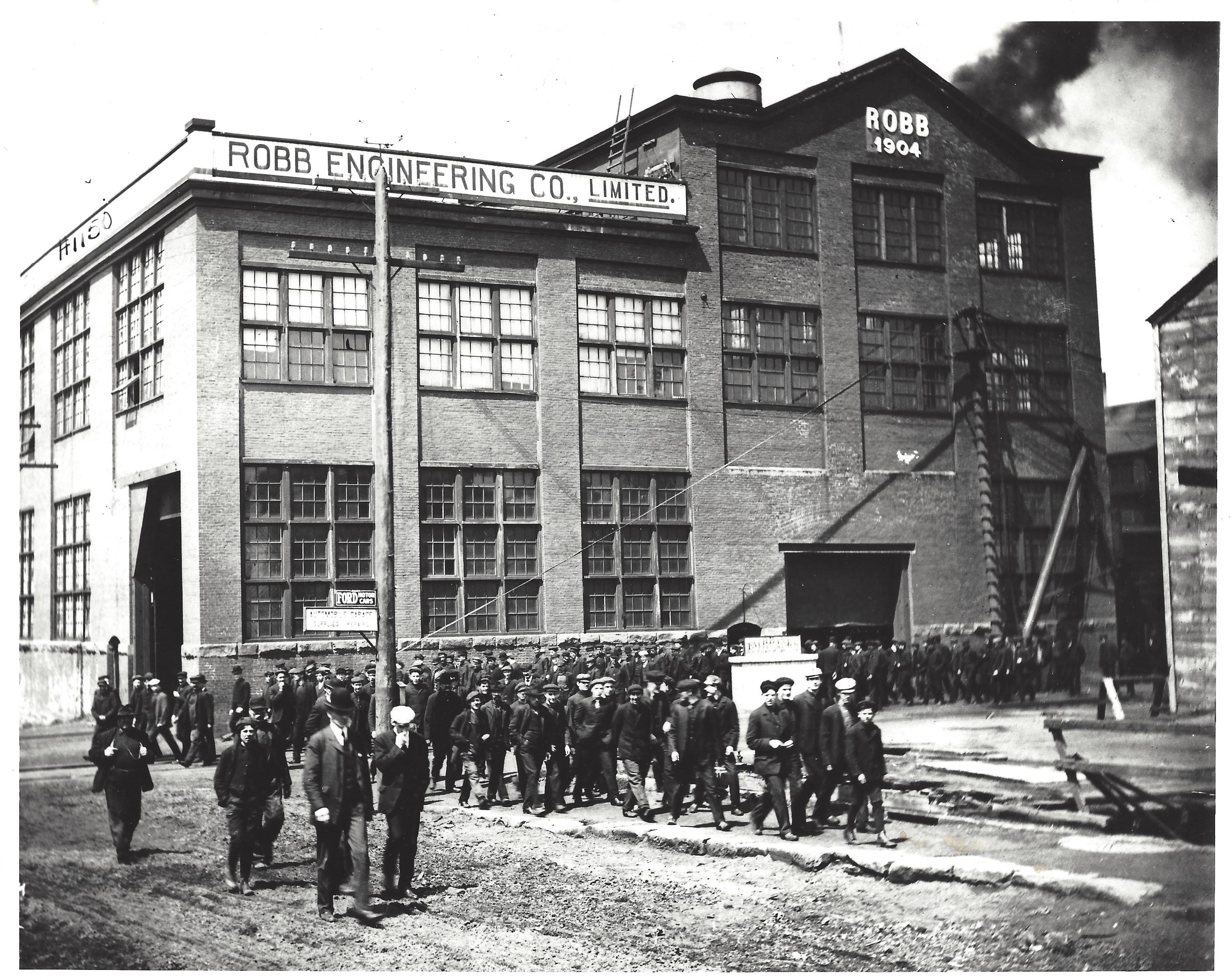 Amherst in the first decade of the twentieth century was a bustling manufacturing town. The town’s locally owned factories included a railway car building plant with 2,000 workers, an engineering firm employing 400 workers, a boot and shoe factory and a woolen mill. A carriage and woodworking company with ambitions to build automobiles also operated in town. Hundreds of Maritime workers and their families relocated to the town, doubling the population to nearly 10,000. Predictions for Amherst’s future were universally positive.

Amherst workers confronted a dramatically different reality by the end of the First World War. The railway car manufacturing company was now merged with two Montreal companies. New investment flowed to the Montreal operations. The local plant witnessed crashing employment numbers. Eight hundred jobs in munitions production temporarily masked the dire situation confronting the Amherst plant. Other Amherst workers faced similar threats, and by 1919, most working women and men worried about their jobs and the future of their town. Employers demanded workers accept wages lower than elsewhere in Canada.

This was the situation the Amherst Federation of Labor (AFL), or the One Big Union as it became known locally, challenged in the spring of 1919. Workers enrolled directly into the Federation of Labor when it organized in fall 1918. Women and men, skilled workers and labourers, and workers from the town’s small black community joined. Every member paying the one-dollar membership fee had the right take part in AFL deliberations and to vote. Workers of “of all grades” were welcome declared its leader, Frank Burke.

As the AFL evolved through the spring of 1919, members became enthused by talk in western Canada of the One Big Union, which had not yet been established. Union officers in Amherst wrote to the western leaders proudly telling them that they already had their own One Big Union and asked to affiliate. Western leaders had to admit that the Maritimes were ahead of them but promised to keep the easterners informed about western developments.

The local branch of the Socialist Party of Canada (SPC) supported the strike. In February, Roscoe Fillmore, a well-known Maritime SPC member, had spoken on the Russian revolution and dedicated himself to organizing a branch in Amherst where there were already “about 40 young energetic Reds.” Fillmore enthused that “this Amherst bunch contains the best blood of any part of the Maritime movement.”

Strikers closed all the town’s factories on 19 May. The next day, though, workers at Robb Engineering voted to return to work. This threatened to derail the general strike. The problem was that the future of the company was in peril. Bad business decisions left it deeply in debt to Montreal banks. Alexander Robb, fearing the imminent collapse of his company, broke ranks with the town’s other employers and negotiated with the company’s workers. He agreed to wage increases and the creation of a joint council of management and workers to settle future disputes. These concessions and workers’ fears of the company’s imminent collapse led them to agree to return to work. 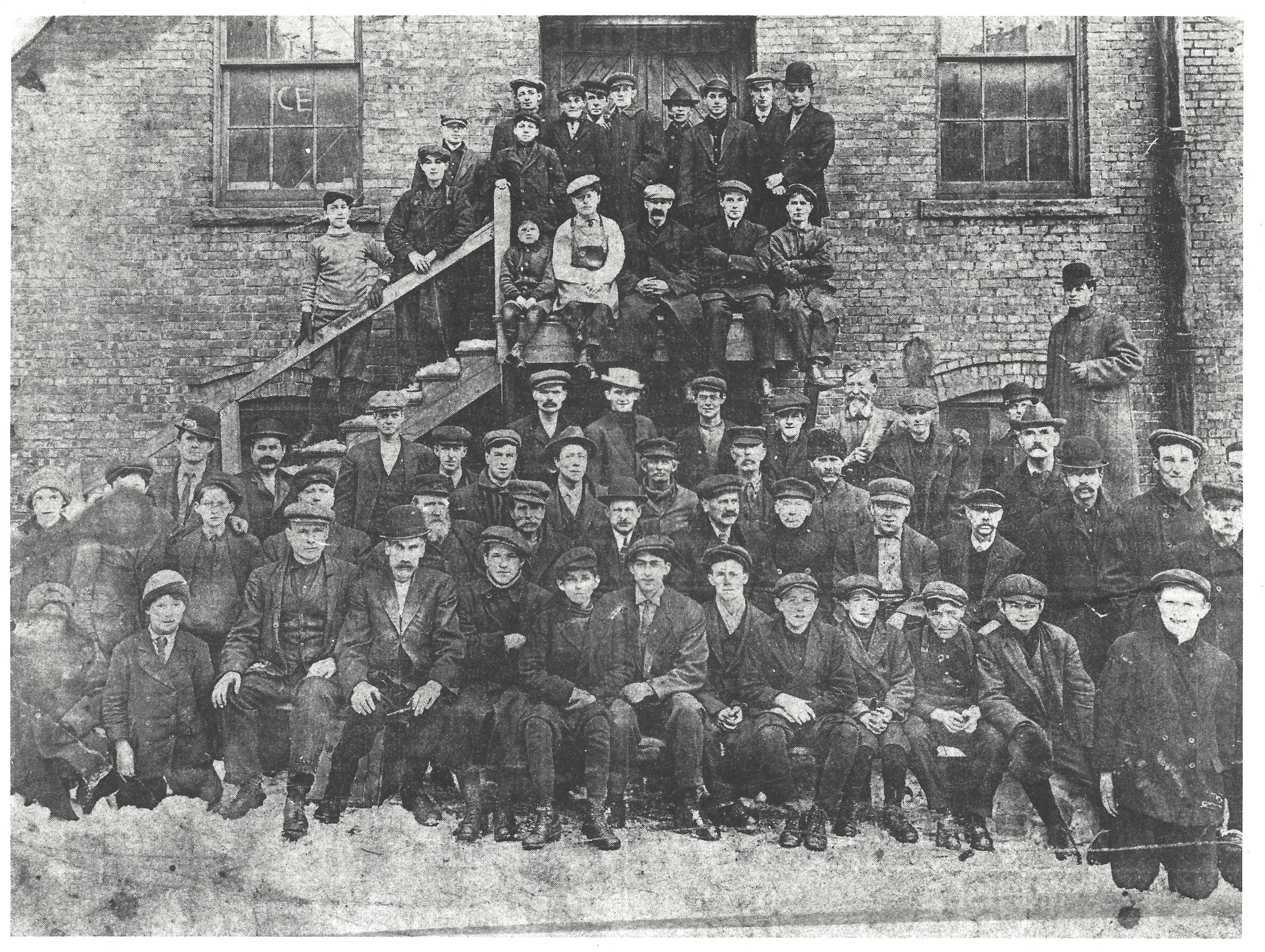 Amherst Citizen,March 24, 1976. ” The above photo which was loaned to this newspaper by courtesy Arthur Gould shows the employees of the Amherst Boot and Shoe factory lined up on front of the building on Station Street in 1918 after the end of the First World War. Mr. Gould’s father, the late Albert Gould is one of the employees.”

This decision created a strong resolve by other workers and employers to stand firm. Employers declared their determination to resist unionization, and the AFL decided to continue the strike. Frank Stanfield of Stanfields in Truro, Nova Scotia, who had recently purchased the Amherst Woolen Mill, told the mostly women workers in his factory that it would close permanently if the strike continued. The women refused to be intimidated and continued the walkout.

The general strike lasted for three weeks. By this point the town was in crisis. Employers, especially those operating the smaller factories, worried about the future of their shops, and many strikers were in desperate financial circumstances.

The AFL announced on 12 June at a general meeting that the situation had “changed materially over the last few days.” In meetings initiated by the town council, four of the town’s employers had met with the AFL shop committees, an implicit recognition of the AFL. They negotiated an agreement that included a nine-hour day with no decrease in wages. It was expected Canada Car would soon follow suit. The AFL officers recommended these offers be accepted. The alternative, it warned, was “a deadlock to the bitter end.”

Union recognition and a nine-hour day without a reduction in pay was victory enough for the moment. As reported in the Eastern Federationist, a regional labour paper, “We heartily congratulate the Amherst union workers on their victory for no matter what may be said to the contrary it was a victory for their recognition and [sic] raise in pay. Not bad for beginners.”

However, time proved this only a temporary victory. In the 1920s, deepening regional disparities devastated the Maritime economy. Every Amherst company either closed down or carried on greatly diminished from the height of the town’s boom years. Workers and their families packed up and left in search for employment. The town’s population fell from 10,000 to less than 7,500.

It is not surprising, then, that in the mid 1970s when I went to Amherst I found only an elderly Lester Doncaster, an AFL officer for a short time in 1919, who remembered the general strike and the “One Great Union of all the factories in Amherst.”

2 thoughts on “The Workers’ Revolt in Amherst”