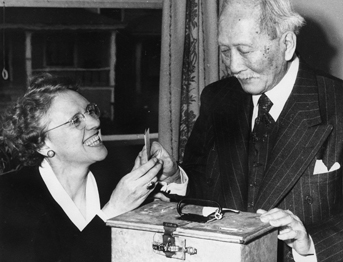 Editor’s Note: This post is the second in our special election series.

The photograph of Won Alexander Cumyow voting in the 1949 federal election marks an important landmark in the struggle for democratic rights in Canada. Although born in Canada before the country existed, Cumyow had to wait 88 years to have the unfettered right to vote.

Few other non-Indigenous British Columbians have roots as deep. Won Alexander Cumyou (Wen Jinyou in Mandarin pinyin romanization), was born in 1861 on the traditional territory of the In-SHUCK-ch Nation at Port Douglas on the North Shore of Harrison Lake in 1861. Cumyou’s parents, Won Ling Ling and Wong Shee,[1] were storekeepers and outfitters who came up from California in 1860. His mother was among the handful of women from China who migrated to BC at this time. His parents were Hakka, members of a minority ethnic group from South China that made up 10% of the 19th century Chinese migration to BC.[2] By the 1870s, Cumyow’s family had moved to New Westminster where Cumyou completed his schooling, including high school. In 1889, he married Ye Eva Chan, a woman from Hong Kong whose parents were Methodist missionaries.  The Cumyow-Ye’s eventually had ten children. In 1923, their grandchild, the son of their eldest daughter Grace and her locally-born husband Chinese Cecil Sit-shiu Lee, became the first fourth generation Chinese Canadian.

Cumyow was well integrated into settler society at a time when there was almost no Chinese or Hakka community to speak of. He grew up speaking Hakka, Cantonese, English and Chinook, which was the Indigenous trade language and the main language of work on the coast in 19th century BC. Following the common practice of the times, although his father’s surname was Won, Cumyow’s given name became his surname. He attended school in New Westminster with Richard McBride, a future premier of British Columbia. The 1881 census lists his religion and that of his siblings as Anglican.[3] Reporting on his wedding, the New Westminster British Columbian Weekly described him as “well known to most of our readers, as, perhaps, the most intelligent, clever and best educated young Chinaman in the province, exceeding in his English education many young men of Caucasian origin.”[4] Indeed, his reputation was such that from 1889 until his retirement in 1936, the Vancouver Police Department employed him as its official Chinese and Chinook interpreter. During this time, he also worked as a labour contractor and importer.[5]

Despite his education and reputation, Cumyow experienced racism directly. Trained as a lawyer, he was unable to article because he was not on the provincial voters list. British Columbian and 1885 Canadian legislation barred any “Chinaman” from voting. Cumyow was able to register to vote in New Westminster during the 1890s and may have voted in elections, but he was unable to remain registered to vote in the 20thcentury. In 1885, an all-white jury took 20 minutes to convict Cumyow of fraud based on what Cumyow claimed was the falsified evidence of his white business partner. Chief Justice Matthew Bailey Begbie sentenced him to three years in the provincial penitentiary.[6] In 1914, when he moved his Christian, English-speaking family from Vancouver’s Chinatown to the Grandview area, the local ratepayers association passed resolutions calling to prevent Chinese from owning property in Vancouver and elsewhere in BC.[7] In 1923, like all other Canadian-born Chinese, he had to register with the federal government under the Chinese Immigration Act in order to remain in the country.

Throughout his life, Cumyow actively fought against discrimination and for the rights of Chinese people. In 1884, the year after he moved to Victoria, he helped found the Chinese Consolidated Benevolent Association (CCBA), serving as its English language secretary. The Imperial Qing Consulate in San Francisco established the association at the request of BC merchants on the grounds that they needed to unite all Chinese because Canadian officials were “infected with cruel habits even surpassing those seen in the United States in recent years.”[8] David Chuen-yan Lai notes that the association acted as the de facto local government of the Chinese, organizing its self-defence, settling internal disputes and providing social services, including a hospital, relief and eventually a public school.[9]

As the English-language spokesperson, Cumyow was a key intermediary with the domiant society. He would have been the person who presented the association’s census of the Chinese population in BC and other information to the 1885 Royal Commission on Chinese Immigration. He was one of the handful of Chinese witnesses to the 1902 Royal Commission on Chinese and Japanese Immigration, noting that people were anxious to employ the Chinese and that it was mainly white politicians who were stirring up anti-Chinese feeling and moral panics.[10] Again during the 1922-3 Victoria Chinese students strike, he represented the association in its response to the school board’s attempted segregation of all pupils of Chinese race, telling them that segregation would “widen the breach” between Chinese and other Canadians, which would be “to the detriment of the Chinese in Canadian life.”[11]

In 1899, Cumyow helped found the Chinese Empire Reform Association or the Bao Huang Hui???(“Save the Emperor Society”) as it was known in Chinese, once again serving as its English language secretary and official interpreter. The association was established by leading BC merchants and the reformer Kang Youwei after the Empress Dowager’s palace coup abruptly ended the One Hundred Days Reform in China, a reform intended to move the Qing dynasty toward a constitutional monarchy. By 1903, the association had a world-wide membership of 500,000 and was in many ways the first mass political party in Chinese history. Cumyow and his BC colleagues saw legislated anti-Chinese racism as at least in part the result of the weakness of the Chinese government and advocated the modernization and strengthening of China as key to ending racism in Canada. Although its English language incorporation speaks of the association’s benevolent purposes, it tried to forcibly overthrow the Empress Dowager through an abortive uprising. Cumyow remained active in the association for many years, serving as the secretary of its school in Vancouver.[12]

Thus, if the picture shows evident joy on Cumyow’s part, it was because his life-long struggle to participate in Canadian life like any other had finally come to fruition. Cumyow passed away in 1955.

Timothy J. Stanley is professor of Education Foundations and Antiracism Education in the Faculty of Education, University of Ottawa. He has published extensively of the histories of racisms, Chinese Canadian experience and antiracism education.