Starting the summer vacation at the Simcoe County archives, museum and the Barrie library may seem as a different approach to welcoming the holidays. My 11 year old daughter, Isabelle, and I, however, were on a research mission to uncover the story about “Bottomless pond.” Having completed a ghost story project for her class, highlighting points of interest in Oro Township, in Ontario, we were eager to discover the connections with oral history, a local churchyard and the pond.

To set the context, Isabelle and I often stop at different points of interest, usually when coming back from school, volleyball practice or simple errands. These stops include historic buildings, churchyards and abandoned houses. I try to share what I know about our stops that has been shared with me. Naturally, two people who love a good story and history, we were often late for our destination!

I have had the opportunity to grow up associated with two rural Ontario communities, my Indigenous community of Munsee-Delaware First Nation (southwest of London, Ontario) and the farming community of Clowes/Dalston (northwest of Barrie, Ontario). Both communities are unique in terms of history,  however a common practice was visiting with the older generations. Most of what I have been able to share with Isabelle relates to a different time, when you would visit older members of the community, to check in on them and to listen to stories. This was a rich part of life.Growing up in a rural community, I was exposed to various stories that were passed down through generations. It is this practice of sharing stories that is an inherent part of how I share with my own children.

When I was young, my parents believed it was important to be part of the community. This took on many forms, being part of clubs and social events. Both communities with which I am associated are unique in terms of  language and expressions. Nonetheless, in both communities, “going to town” for groceries or other items involved travel and time. Although I did not grow up on a farm, I was actively encouraged to help out on local farms. This involved planting, harvesting, cleaning cattle pens, haying and taking care of animals. Most of our time was spent exploring the rural landscape, fields, creeks and forests with friends. The use of “devices” was limited to TV; there were only a few channels that came in clearly.

The story of bottomless pond is associated with the small village of Dalston, Ontario. Dalston is a small village, located at the corner of historic Penetanguishene Road (Highway 93) and Old Barrie Road, about 15 kilometres north west of Barrie, Ontario.

On the way to picking up a few odds and ends at a local grocery store, Isabelle and I stopped to view a new sign detailing Dalston’s local history. The sign was located next to the Dalston United Church, where I attended in my youth. For many summers, I also helped family members maintain the cemetery, cutting grass, trimming around headstones. While working, I found I was drawn to reading the headstones, learning history of families who were buried in the cemetery. 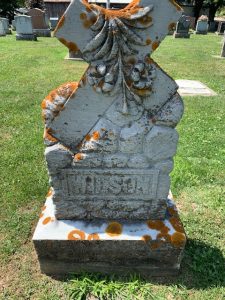 A headstone from the Dalston cemetery.

Located behind the United Church, on a farm is a small pond  that has been known by many different names, White’s pond, Handy’s pond, Mill pond and most often, Bottomless Pond. When I was young, older community members at the church related many stories about Dalston and the area. One of the stories dealt with bottomless pond and its unfortunate history.

In the far corner of the cemetery, there were two crosses made of wood. The story that I was told noted that this was the resting place of two people who drowned in the pond. Sometime in the late 1800’s two young girls went skating on the pond in the winter. The ice broke and they drowned. It was these two crosses which marked their burial. Lost in time are their names.

In the early 1900’s the pond claimed another victim. This story passed in oral history but was well documented by a Barrie newspaper. In June of 1913, Ernest Wilson, a seventeen-year old local farm boy, decided to go for a swim after a day of working in the fields. As the article states, Ernest wasn’t alone, others – including his older brother – joined him. Interesting to note that it was reported that there was a raft in the pond, suggesting that swimming was a fairly common event. It isn’t clear how Ernest got into trouble in the water, although the newspaper makes clear that others tried to save him. Despite this, Ernest drowned. He was reported as an officer in the Sunday School program, a great football player and “loved by all.”

Along with my daughter and son, we walked through the cemetery, and found the Wilson tombstone (pictured above). Ernest’s dates are not listed but there are smaller plaque stones placed at the base of the main stone, suggesting that his may be covered with earth. Within a few years, the Wilson family suffered loss again, losing both a son-in law to the Great War as well as a granddaughter.

Next to the church and cemetery is the farmhouse and barn that would have existed at the time of Ernest’s drowning. The property has changed owners over the years. Currently the owners run a small market garden business, selling fresh produce. My children and I needed some lettuce so we stopped in. Off hand, I decided to ask the person helping us, if I could take a picture of the pond. I followed up by asking whether she knew about the tragedy of the pond. I was a little surprised that she had, that the story of the pond was very much “alive” in this community. The owner also went on to explain that the pond had claimed another victim in much more recent years. She explained that it was a farmhand who worked on the property.

Using both the Simcoe County archives and the Barrie Public Library, we followed up with this story. On August 7th, 1944, a 17 year old farmhand named Peter Pankratz drowned in the pond. According to the “History of Vespra,” Peter was from Saskatchewan and a cursory search using the internet revealed his grave. There was no story in the local paper that we were able to locate. We thought this may have had to do with the distraction of events in Europe and the Pacific.This story raised a question from both of us, wondering why he was so far from home at a young age.

Over the span of a week, Isabelle and I were able to make connections with oral history in our community. We were also able to work through the challenge of trying to unearth information about stories that are many years old. Compounded by this was the fact that we could not ask people who may have had a living memory of events. We proved the longevity of oral history as the stories of the events surrounding “Bottomless pond” still survive to this day. 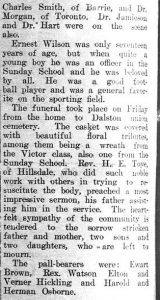