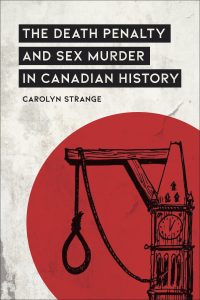 In 1967, the federal government placed a moratorium on the death penalty in Canada. Nine years later, Bill C-64 officially abolished capital punishment. Over the previous century, 710 people were executed in Canada, but the public reaction to each of these varied. Some generated plenty of media attention, while others fell beyond the public gaze. The responses to these cases were heavily influenced by broader societal factors, including the cultural status of perpetrators and victims, the details of the crime, and how the case fit into wider trends within criminal justice.

Cases involving capital punishment would typically lead to a renewed debate over the death penalty’s place within Canada’s criminal justice system. In particular, murder cases that also included sexual violence generated more attention and conflicting opinions on executions. This is just one of the areas of focus for Carolyn Strange in the new book The Death Penalty and Sex Murder in Canadian History. In the book, Strange discusses how these convictions were more likely to result in executions, while also analyzing the role of discretionary justice in these cases. By offering a deep dive into the case files, Strange provides a fascinating history while also exploring how the death penalty still looms over criminal justice in Canada.

In this episode of the History Slam, I talk with Professor Strange about the book. We discuss her background studying criminal justice, the public’s influence in capital cases, and the concept of discretionary justice. We also chat about the number of capital cases in Canada, how reliable the sample size is, and whether capital punishment could re-emerge as a political issue.