Earlier this month, the Graphic History Collective released RRR #26 to mark the 25th anniversary of the 1995 Calgary Laundry Workers Strike.

The poster by Mary Joyce and Alvin Finkel outlines the importance of rank-and-file militancy, much of it by immigrant women of colour, in the fight against austerity and privatization in places like Alberta. This poster is particularly pertinent because the Provincial Government of Alberta is today, 25 years later, launching new attacks on health care workers in the midst of a global pandemic.

In 1993 and 1994, the Alberta Progressive Conservative government of Ralph Klein eliminated tens of thousands of public sector jobs and cut wages and benefits of remaining workers. Within two years, Klein had chopped Alberta program spending by over 21 per cent, and he began a massive contracting out of public services. The trade union movement seemed paralyzed by the government’s recklessness. In 2019 and 2020, a similar scenario appeared as Jason Kenney’s United Conservative Party (UCP) announced plans to cut public services and wages while privatizing public services whenever possible. But the earlier Klein cuts had put the union movement on alert and the workers’ response was far more militant.

In 1995, when the Calgary Health Authority furthered the privatization agenda by announcing a contracting out of hospital laundry workers’ jobs, it expected compliance from the affected workers. Their jobs would go to K-Bro Linens in Edmonton. Most were Caribbean and Asian immigrant women. They had taken a 28 per cent cut in the previous round of bargaining to preserve their jobs: strenuous, dangerous jobs handling blood, body parts, and contagion in the linens they laundered. They were furious when they learned that they would be fired despite their earlier sacrifices.

The first to respond were 60 laundry workers at the Calgary General Hospital, members of the Canadian Union of Public Employees. Their union representatives warned that a wildcat strike would be illegal and could result in them being fined and the union being decertified. But, as Barbadian-born worker Yvette Lynch, an 11-year veteran of the laundry, said: “People were prepared … they just can’t ask us to take cutbacks and then decide to take away our jobs from us just like that.” They called in sick on 14 November 1995. The next day the same scenario occurred at the Foothills Hospital where laundry workers were members of the Alberta Union of Provincial Employees.

Within ten days about 2,500 workers in six hospitals and nine nursing homes were wildcatting and hundreds of other healthcare workers were working to rule. Trade unionists and non-unionists alike inside and outside the health sector demonstrated solidarity with the strikers on their picket line and in public rallies. Growing calls for a general strike scared Premier Klein. He offered the unions a delay in contracting out of 18 months, long enough for most of the workers to find other jobs, plus paid retraining and severance payments. The striking workers were divided on an offer that would not make their jobs permanent. But faced with threats of legal action by the government, which had banned strikes in the health sector, a majority accepted the 18-month offer. “Tough guy” Ralph Klein had blinked, and it was a group of mainly immigrant women workers who had provoked that. The courage displayed by the laundry workers inspired a wave of strikes and job actions by other healthcare workers; licensed practical nurses and general support service workers repeatedly took part in some of the largest walk-outs in Alberta’s history during the closing years of that decade.

While the laundry workers’ victory was a partial one, the events it set in motion marked a victory for all Alberta working people. The Klein government put back a portion of funds they had cut from medical care and other public services, responding to accusations during the wildcat that they had cut too much, and that it was workers whom they had hurt in the process. Privatizations slowed though the government shuttered the Calgary General Hospital in 1998. The Klein years overall were a wasteland for Alberta working people but they would have been much worse if the laundry workers had not inspired a large section of the Alberta working class to demonstrate that they would not accept further cuts and privatizations. Yvette Lynch put it this way: “It made us feel good, it made us feel strong, like we did something that we were supposed to do, that they can’t walk over the little people.”

Long-time executive secretary of the Calgary and District Labour Council Gord Christie said of the laundry workers: “in times of struggles, the real natural leaders came forward … Some of the people within the laundry workers had never been to a union meeting, never held positions within the union. They were the strongest leaders … It was fabulous how those people came forward and said, ‘we’re going to do it and we’re so proud and we’re going to make it happen.’” Similarly, in 2020, rank-and-file militancy across the public sector persuaded union leaders that the fight against the UCP had to be in the streets and immediate rather than a lot of talk while waiting for another election in which the UCP might be defeated. 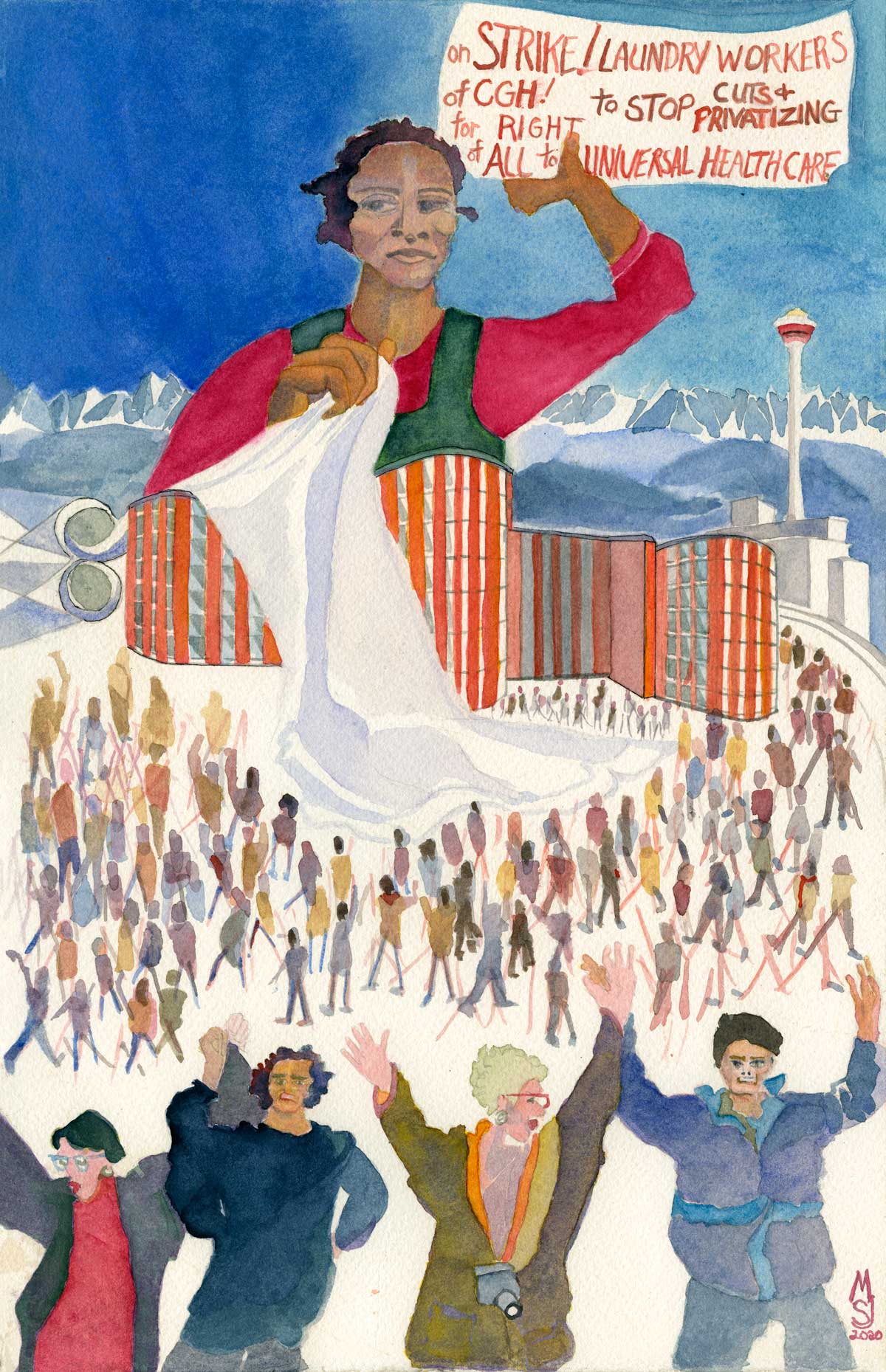 [Image Description:“The poster depicts a Black woman in front of mountains and a blue sky. She is wearing red and green, holding a white sheet in one hand and a sign in the other that says: “On Strike! Laundry Workers of CGH! To Stop Cuts and Privatizing. For Right of all to Universal Healthcare.” She is behind a orange and white building and a large crowd of people. In front of the crowd are four different women with their arms up in the air.”]

Mary Joyce lives and works in Edmonton, Alberta, producing art for exhibition, sale, and commission. Thirty-five years a studio artist, she makes work that celebrates our ongoing upsurge of political mobilization and citizen engagement with vigour, immediacy, depth, and sensuality. Active in the collection of McMaster University’s German expressionist art collection while a young student, her philosophical and aesthetic foundation is serving her community well. As an award-winning printmaker and painter, she transposes techniques from one medium to another, discovering in the interplay meaningful juxtapositions. Her oeuvre includes paintings, prints, and installations with large fabric or paper elements. She has shown work throughout Canada and Europe. She is university-educated in Art History, Literature, Studio. Her work and publications are in public and private collections. http://www.maryjoyceart.com.

Alvin Finkel is a founding member and current president of the Alberta Labour History Institute. He is professor emeritus of history at Athabasca University. A prolific historian, he has published textbooks on Canadian history and many works on Canadian labour and social policy history. He is the editor of Working People in Alberta: A History and the author of Social Policy and Practice in Canada: A History. His latest book and his magnum opus is Compassion: A Global History of Social Policy. https://twitter.com/alvinfinkel.

Reshef, Yonaton, and Sandra Rastin. Unions in the Time of Revolution: Government Restructuring in Alberta and Ontario. Toronto: University of Toronto Press, 2003.

Taylor, Jeff. “Labour in the Klein Revolution.” In The Trojan Horse: Alberta and the Future of Canada, edited by Gordon Laxer and Trevor Harrison, 301–313. Montreal: Black Rose Books, 1995.