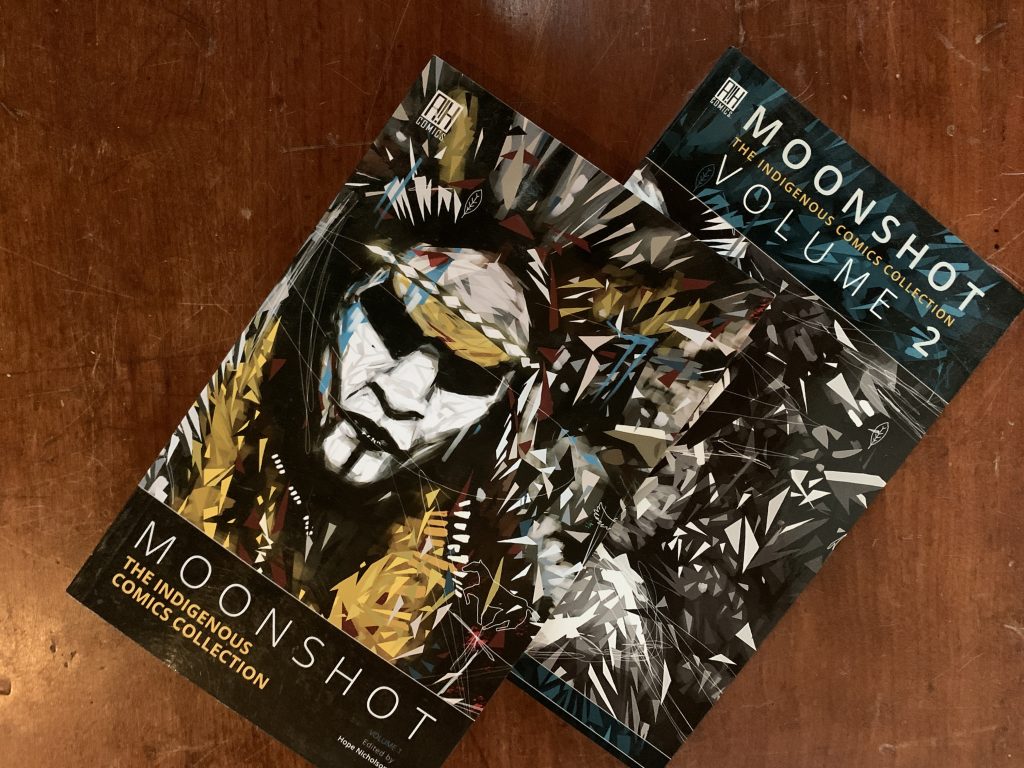 Covers of Moonshot volumes 1 and 2. Photo by author.

We live and breathe in a world that often pretends it got rid of us. In the face of that, MOONSHOT volume two, which is bursting with stories, is an act of love and also of resistance. We love ourselves and our communities. We’re still here, unbroken lines of stories. We not only survive, but thrive. We’re not victims. We are protectors. This book is defiant, unabashed love.[1] –James Leask

Eradication of Indigenous knowledge, epistemicide, is an integral part of colonization. However, Indigenous people have not only resisted epistemicide and prohibition of their pedagogical practices, they have also introduced new and innovative ways to share ancestral knowledge. This post draws attention to the first two volumes of MOONSHOT: The Indigenous Comics Collection and highlights how Indigenous storytellers and artists have used comics to combat colonialism.

MOONSHOT is a unique collection of stories belonging to Indigenous cultures from all over North America, including the Métis, Inuit, Haida, Sioux, and Cree. All art and stories in these volumes have been created by Indigenous people. Importantly, Elders from the many communities represented gave permission to the artists and storytellers to share this knowledge. These stories challenge stereotypical one-dimensional comic book ‘Indians.’[2] The stories in MOONSHOT express Indigenous multiplicities and remind readers that there is no pan-Indigenous identity. The stories also realize Indigenous self-determination.

Elizabeth LaPensée, writer of one of the collected stories, “They Who Walk as Lightning,” notes that her community had a negative view of comics because, in the past, comics perpetuated Indigenous stereotypes and tropes. She adds that Indigenous people wanted to see their own representations of themselves in comics. Additionally, LaPensée writes that now “there is a huge demand [for Indigenous comics] thanks to awareness created through the MOONSHOT collection.”[3] It is evident that MOONSHOT has been able to reach a broader audience and disseminate Indigenous stories as all three of its volumes are available through international booksellers such as Barnes and Noble, Amazon, and Comixology. Adding to its popularity are its acclaims; the first volume of MOONSHOT won The Best Book of 2015 and a Bronze Medal for Best Graphic Novel at the 20th annual Independent Publisher’s Awards.

Many Indigenous communities rely heavily on oral tradition, which until twenty-some years ago was not considered to be a “legitimate” form of history keeping in Canada.  As recently as 1997, Justice McEachern questioned the legitimacy of Indigenous oral traditions in the Delgamuukw v. B.C. case of 1997 and found that judicial truth was in contrast to oral tradition. He concluded that oral traditions were not reliable, and, therefore, not admissible as evidence. However, in a monumental decision, the Supreme Court reversed McEachern’s ruling six years later, arguing that if Indigenous rights are protected by the Constitution, then evidence had to be adapted so that oral histories can be weighed equal to written sources.

The story “Ayanisach,”by Cree writer Todd Houseman and illustrator Ben Shannon in MOONSHOT: Volume 1, emphasizes the significance of oral tradition in Cree culture. The Cree meaning of Ayanisach is “he who tells stories of the past.”[4] Houseman and Shannon share their story is about a grandmother teaching her grandson, Archer, the history of their community through oral tradition. Once Archer has been able to memorize and articulate the story to his grandmother’s liking, Archer calls a community meeting. Sitting with his people around a campfire, “Ayanisach” ends when Archer begins his telling: “It is very important that we begin today with the story of our people. Knowing our past will ultimately take us to our future.”[5] We know Archer will now retell the history that his grandmother told him. This comic centers oral tradition and the ways that Indigenous knowledge is kept and passed on. Oral tradition, Houseman and Shannon remind us, is not just what is told that needs to be correct, but also how knowledge is delivered. “Ayanisach” combats colonialism by utilizing a Western-style pedagogical method—comics—to assert the value of oral traditions, while simultaneously conveying more complex elements, such as the importance of preserving history to Indigenous groups.

“The Qallupiluk: Forgiven” is another story from MOONSHOT: Volume 1 by the writers (and partners) Rachel (Inuit-Cree) and Sean (Scottish-Mohawk) Qitsualik-Tinsleyand American artist Menton J. Matthews III (who goes by the name Menton3). “The Qallupiluk: Forgiven,” is based on an Inuit story of a girl who interacts with a creature called the Qallupiluk who lives deep in the Arctic Ocean. This story may be familiar to readers who grew up with Robert Munch, as Munch loosely based his 1992 children’s book A Promise is a Promise on stories he heard from Inuit Storyteller Michael Kusuhak. The Inuit believe that the Qallupiluk lures disobedient children into the ocean—never to be seen again. This narrative serves as a warning for children who disobey their parents and wander off to play alone on the ice or beaches. “The Qallupiluk: Forgiven” is important in the resurgence of Inuit culture because it transmits their mores and values. Both “The Qallupiluk: Forgiven” and “Ayanisach” focus on beliefs still held today. The dissemination of oral traditions through these comics provides another means to record and share morals, values, cultures, traditions, and beliefs. These comics challenge colonialism by allowing not only for a resurgence of Indigenous beliefs, but also informing a broader readership about Indigenous cultures.

Highlighting present-day beliefs and traditions, each Indigenous author has written their story based on an existing ritual and/or belief from their community, as Indigenous culture is not relegated to stories of “Long ago…” It exists here today.[6]

The importance of community is a theme that runs throughout the collections. Colonial systems such as Residential Schools, the “Sixties Scoop,” the reserve system and others attempted to destroy Indigenous communities. The focus in these stories undermines colonial violence, and instead emphasizes the value of Indigenous culture, family, traditions, and Indigenous people themselves.

The MOONSHOT: The Indigenous Comics Collection represents one strategy to maintain knowledge and culture while resisting colonialism. Volume 3 was recently published in June 2020. Comics, long a colonial product, are now being used as a tool to challenge colonialism by disseminating Indigenous knowledge, resulting in a resurgence of Indigenous communities’ cultures, spiritualties, and identities.

Tarisa Dawn Little is a settler born in Treaty 7 territory. She is a University of Saskatchewan PhD student who lives in Canton, New York. Working with the Wyandot of Anderdon Nation, her current research focuses on the historical tension between voluntary and forced systems of education in Canada for not only Wyandot children, but all Indigenous students in the 19th century.

[2] Michael A. Sheyahshe’s Native Americans in Comic Books: A Critical Study (Jefferson, NC: McFarland & Co., 2008) is likely the best (and humorous) analysis of the historical presentation of Indigenous actors in comics.