It is just over a century since the death of one of New Brunswick’s pioneering Black women entrepreneurs. For a woman who garnered a reputation for her business savvy in Saint John, across New Brunswick, and in the United States, Georgina (née Mingo) Whetsel Moore’s death in 1919 in Bedford, Nova Scotia (NS) went largely unnoticed.[1] Her life, however, is a window into the dynamics of the small Black business community of nineteenth-century Saint John.

Born on 4 July 1846 in Pictou, NS, Georgina was the daughter of Robert and Christina (née McKenzie) Mingo whose family eventually settled in Bedford to farm. Georgina moved to Boston, Massachusetts in the early 1860s to join her older sister, Maria, and brothers, John and Robert Jr.[2]

It was during this period that she met Robert M. Whetsel, an ice dealer and established oyster saloon keeper from Saint John.[3] Her first marriage and his second after being widowed in May 1870, they were married in Boston on 27 December 1872. Georgina was twenty-five; Robert was forty-nine.[4]

Robert maintained his oyster saloon, ice business, and home at 93 Prince William Street, Saint John. Over the next eight years, Robert and Georgina had four children: Frank in 1873, Mary in 1879, and twins, Irene and Christina, in 1881.[5]

Over the next decade, the ice business flourished. Robert and Georgina acquired other properties downtown including a new residence at 45 Carmarthen Street following the Great Fire of 1877. They operated the ice business solely from headquarters at 76 Germain Street as well as an outlet near the North Market Wharf.[6] Robert Whetsel and Cornelius Sparrow maintained an ongoing partnership in both the restaurant and ice ventures while Georgina seems to have concentrated on the day-to-day functioning of the ice business, growing a customer base.[7]

Disaster struck the family when Robert suddenly died at 64 on 25 February 1885 at their Carmarthen Street home. Only seven years earlier, they lost Robert’s 24-year-old son, Robert Henry. In late 1887, Georgina’s two youngest daughters died within two months of each other.[8] 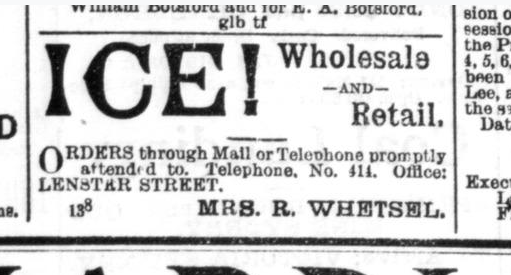 Georgina continued to personally attend to the ice business and dominate the ice landscape of Saint John. In highlighting her unique position as a female Black entrepreneur, the Saint John Daily Telegraph showed how demanding the management of the business must have been. Georgina kept a monopoly on the ice business in the city; she shrewdly negotiated an exclusive contract with the St. John Horticultural Association for supply from Lily Lake. Because costs of transport were so critical to profitability, this monopoly within the city limits kept many other competitors at bay. [9]

Even by modern measures, the operation of ice cutting, hauling, and distribution was massive. Distribution across the city started at two o’clock in the morning, with deliveries to regular household consumers occurring later in the day.[10] According to the report, ice was “the one indispensable commodity of the summer season.”[11] Through the winter, nearly 30 teams cut and loaded ice from Lily Lake to be stored in five warehouses on Leinster and Duke Streets. During the 1887-88 season, Georgina’s company cut 7,000 tons at a labour cost of $400 per week. 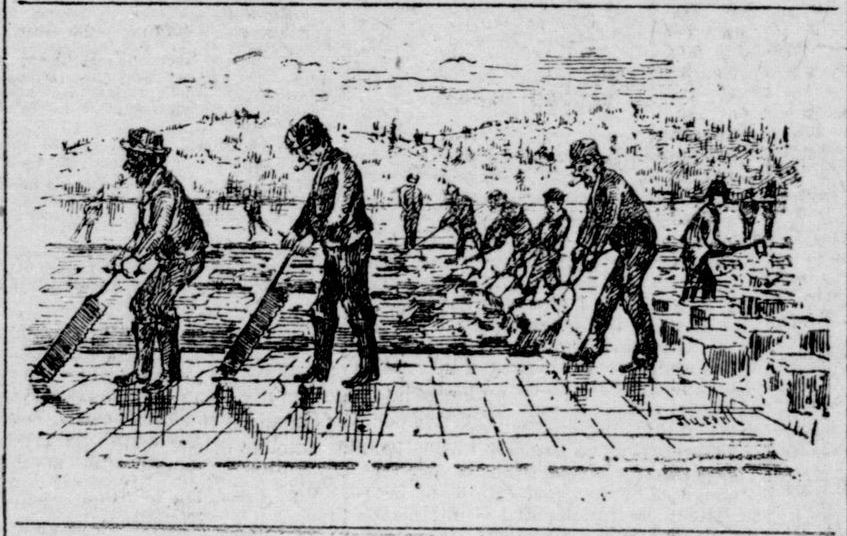 One of the changes in the marketplace that aided Georgina in growing the business was technological advancements in refrigeration. These innovations meant brewers, butchers, grocers, and other commercial operators could incorporate larger refrigerated units on-site. Simultaneously, Georgina adopted the latest techniques and machinery for ice cutting. By 1894, the output from Lily Lake reached 8,000 tons employing 30 men to cut and load, with another 30 teams hauling to the ice-houses for storage.[12]

Her status as an accomplished business woman and Black female social leader came into public notice following Saint John’s first-ever winter carnival parade viewed by thousands of citizens. Held on 27 February 1889, Mayor Henry J. Thorne declared it a public holiday and kicked off more than 75 floats, four marching bands, and numerous political and military representatives from Chipman Hill. Unknown to Georgina, a group entered a float entitled, “Ice House Delegates.” While the intention may have been to profile her company in an amusing manner, all the role-playing employees were depicted with blackened faces.[13]

In a strongly worded letter to the editor of the Daily Telegraph on 1 March, Georgina admonished whoever put forth this impression of her business. She felt it was “not at all fair [how] they represented her business in the street procession.” “All the intelligent people of St. John will agree with me,” she wrote, “that I do my ice business in a way that ought not be ridiculed.” Georgina went on to reaffirm that,

I spend a great deal of money every year to keep the wagons, horses, harness, everything in regards to my business in keeping with our nice city. I hire as many poor white men as I do poor colored men. It makes no difference to me as long as they can do their work what color they are. But one noticeable feature in the St. John procession was that the larger part was taken up with the African caricatures, and always in the lowest and most degraded state. This may be a mark of culture and refinement, but pardon me if I don’t think so.[14] 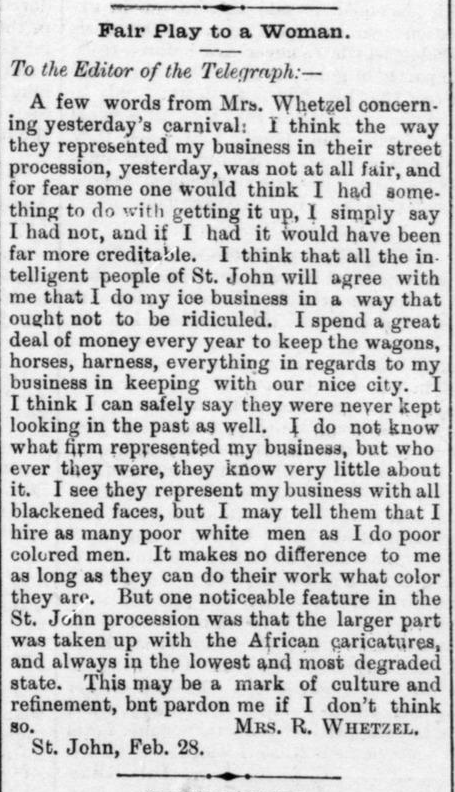 As early as 1891, Georgina was receiving recognition south of the border for her business success. The Washington Bee, an African-American newspaper in the American capital, stated on 1 August that, “a colored woman, Mrs. Georgiana Whetsel, of St. John, N.B., controls the ice trade of that city, employing fifty or sixty men, and ten horses.”[15] A similar story was repeated as far west as the Oregon Condon Globe less than a year later.[16]

Her confidence as a spokeswoman for the Black community was carried into the political arena in 1895 when she met Josephine St. P. Ruffin. An advocate for Black women’s rights in Boston, she also founded the National Association of Colored Women Clubs. As editor of the Boston newspaper, Woman’s Era, Ruffin featured Georgina in an 1895 issue. Perhaps the first Canadian Black business woman to get that recognition, Georgina also appeared as a delegate to the National Federation of Afro-American Women held in Washington, D.C. the following year. 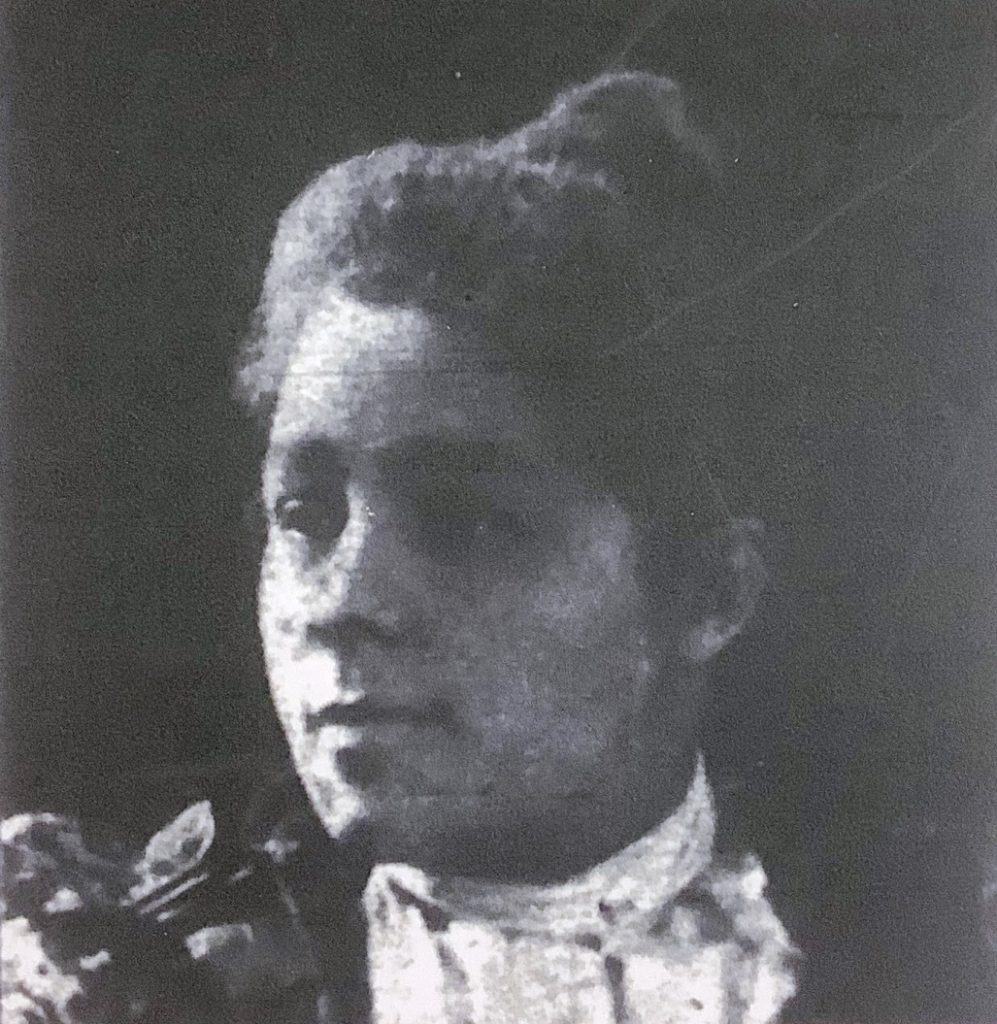 Many residents of Saint John may have been shocked to hear in March 1900, that Georgina decided to sell the business and retire. Although still in good health at 54, her daughter, Mary Elizabeth, suffered from a weak heart.[17]

The principal negotiator to purchase the ice business was prominent Saint John lawyer and politician, Andrew G. Blair. Former premier of New Brunswick, he then participated in federal politics and headed a consortium of partners who would form the St. John Ice Company, Ltd. Although the selling price was not disclosed, the agreement included the sale of the business and property with ice houses, offices, teams, and the crop of ice estimated at 10,000 tons. In a later report in the Saint John Daily Sun on 3 December 1901, Georgina sold the business for $33,000—an equivalent of over 1.2 million dollars today.[18]

In October 1900, she already advertised to let her house at 43 Carmarthen Street. Perhaps it was then she decided to seek the comfort of her siblings still living in the Boston area. In this period, she met Edgerton T. Moore, a retired dry goods merchant from Somerset, Bermuda. On 28 November 1901, they wed in Worcester, Massachusetts. They did not settle on the island “owing to the bride’s objection.” This was possibly because she had already purchased “a handsome residence” in Bedford whose “site was a grand one on a hill overlooking the basin.”[19] After a wedding trip to Washington and other points in the South, the couple made their way to Bedford to spend their final years.

The Saint John Daily Sun summarized the majority opinion of Georgina when she announced her retirement in March 1900 as a leading citizen whose “extensive business which has been the outcome of energy, honesty, courtesy and tact of a first-class business woman, and shows very conclusively that those who are independent and willing to help themselves can and will win the esteem and the confidence of the public.” It was with feelings of “sincere regret that the citizens, business men and the general public” heard of her decision to retire. To their minds, “Mrs. Whetsel has brought the ice business up to the high standard that it now occupies- a standard never attained in the city before, and it is probable that she stands alone as a most successful woman in a like enterprise.”[20]

The experience of Georgina Whetsel begs many questions about the role of Black community members in late-nineteenth century Maritime society. Did her rise and success in the seaport of Saint John have impetus from a vibrant community of Black entrepreneurs? What was the relationship between the post-1850 generation of free slaves and families who had earlier settled in other New Brunswick communities such as Loch Lomond, around Fredericton, and in Woodstock? What was the impact on members of the Black community in an urban setting in terms of racial equality and opportunity? What influence did the church and other social organizations have upon their standing in the community?

Nevertheless, the curtain closed on an extraordinary chapter in the commercial life of Saint John after nearly fifty years when Georgina died. Highlighting the determination of a woman to overcome social and commercial barriers as a member of the Black community, she succeeded in the city not only as an entrepreneur but as a Black woman in an overwhelmingly white man’s world.

[3] Saint John Daily Telegraph 16 May 1870. Robert Whetsel was born about 1821 in Moorfield, West Virginia, where his family lived enslaved on a plantation. He escaped to Ohio and then to Chicago where he and his first wife joined other slaves fleeing north to the British colony of New Brunswick in 1852.

[12] By the end of the decade production had increased to 10,000 tons annually. When she took over after the death of her husband in 1885, the business was processing 3-4,000 tons for seasonal storage. Saint John Daily Telegraph 19 Jan. 1894