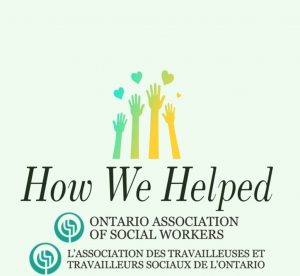 In 1935, a group of Ottawa social workers came together to form the Eastern Ontario Branch of the Canadian Association of Social Workers. Over the next 85 years, the group underwent a number of changes, including becoming part of the Ontario Association of Social Workers, but its role in representing the social work community never wavered. Whether it was organizing social events, pushing for professional recognition, or organizing social justice campaigns, social workers and their clients have benefited from the Eastern Branch’s work.

Since the spring, I have been working with social workers and members of the Eastern Branch on a new project. How We Helped: Stories From Eastern Ontario Social Workers is a 5-part documentary series exploring the Eastern Branch and the role of social work. Each episode examines a specific issue, from advocacy to community to social justice. Using interviews with social workers and archival documents, the series shares the stories of those who dedicated their careers to helping their communities. And even though it is focused on social workers in Eastern Ontario, the issues they confronted are universal.

In this episode of the History Slam I talk with Eastern Branch President Wendy Birkan before we listen to the first episode in the series. We talk about social workers, why they wanted to do a history project, and the Eastern Branch’s legacy. We also listen to Growing Our Practice: Education, Professionalization, & the Fight for Recognition. You can check out the rest of the series here or wherever you get your podcasts.

Sean Graham is a contributing editor with Activehistory.ca