My greatest insecurity as I prepared to teach during Fall 2020 was how to create a sense of community in the virtual classroom for a course that had never before been delivered online. In March 2020, when the spread of COVID-19 caused a sudden pivot to online classes, camaraderie had already been built – my students and I had spent months establishing trust, laughing together, and breathing the same air. From my hastily created home office, I assured students via online announcements that we were all in this together, as we collectively refreshed our news apps again and again. We stumbled across the finish line, bemused and relieved.

While I knew that I was not going to become an expert in online pedagogy over the summer, I nevertheless devoured articles concerning MOOCs, course design, technology integration, and applying Universal Design for Learning principles to assignment building as I reimagined Anthropology of Health as an online offering. In my previous discussion, I outlined one such assignment: the unessay. This term was first introduced by Dr. Daniel O’Donnell1, who asked students to use their own framework or focus to approach a topic, to toss out the rules of essay writing, and to approach the prompt in a medium of their choosing. Speculative projects like the unessay harness students’ creativity, encouraging students to find their personal way in to an assignment. Other academics2 have written about the challenges and successes of the unessay in their classrooms, expressing their delight at the results. This semester felt like the right one to take such a risk.

Anthropology of Health is a foundational course in the innovative Anthropology of Health Stream at the University of Toronto Mississauga. This class is a prerequisite to further health-focused courses and generally attracts second-year social science students, many of whom are anthropology majors, though students with double-majors in psychology, biology, and sociology are frequent attendees. The enrollment leapt this past fall to 102 (in Fall 2019 it had been 61); this population expansion, coupled with the new online delivery fueled my desire to build flexibility into the course.

Students were presented with the following prompt, about which they could craft an unessay or tackle an academic paper:

In addition, students were asked to write a one-page reflection about their projects, briefly highlighting their intentions, their rationale for which medium they selected, and their overall experience crafting the unessay.

It was encouraging to see that approximately 1/3 of the class took on the creative option. Their enthusiastic response emphasized the critical importance of Universal Design principles, integrating choice, engagement, and expression into the foundations of assignments.

While I had anticipated exciting results, I had not predicted that the unessay itself would be foundational to the building of community in the new virtual space. My student hours via Zoom were crowded, with folks dropping by regularly, some weekly, to show me works in progress. These conversations demonstrated that the students were naturally engaging with a curatorial thinking framework, particularly selecting and sense-making. Once students began to dig into the history of the discovery of insulin, it became clear that their main difficulty would be narrowing down their selection of important events/people/moments to just three!

The final projects were, for the most part, outstanding; selected student work is described and shared with permission. Karma Yachungtsang and Chloe Novogradac both focused upon the story of Leonard Thompson, the 14-year-old boy upon whom Frederick Banting and Charles Best first tested their pancreatic extract in 1922. Karma, a pre-med student determined to try creative writing, wrote from the perspective of Banting as he met Leonard’s parents for the first time, evocatively capturing the trepidation of parents hoping for a miracle cure:

My team and I went to the hospital to visit Leonard and my face sunk when I saw the young child laying helplessly on the hospital bed. We saw his parents beside him in tears, clenching his hands, hoping that if they grasped just tight enough, maybe they [would] hold on to their child’s life a little longer.

Chloe represented Leonard after the experimental treatment, strengthened by the resurrecting power of insulin. Alongside Leonard is Marjorie, one of Banting and Best’s lab dogs, featured as an equal. The sacrifice of Marjorie and the other lab dogs whose pancreases were removed to induce diabetes is recognized as a key step in the story of insulin. Chloe included a blue halo around Marjorie and emphasized Leonard’s irises with blue to connect her subjects with the blue ring, the international symbol for diabetes. 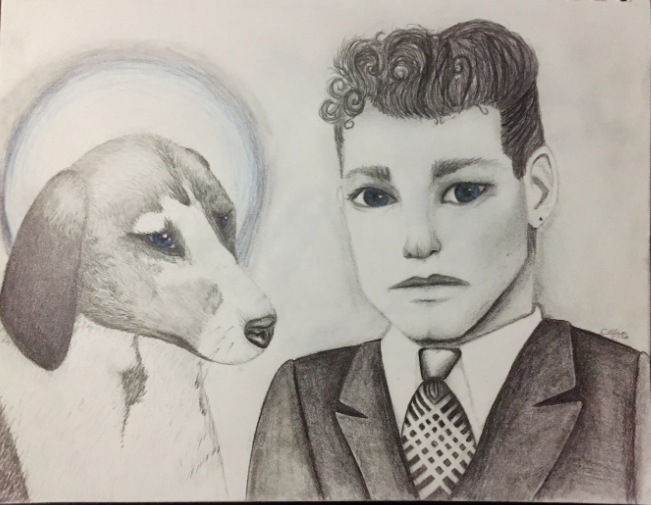 The first meeting of Banting and Best was featured in several works. Johann Misersky highlighted in a comic strip how the outcome of this first meeting and the very course of history was dependent upon a coin toss, while Qinyu Liang, Yunfei Lin, and Xinye Peng coded an interactive game featuring a wry Banting commenting that he hopes Best is not allergic to dogs. 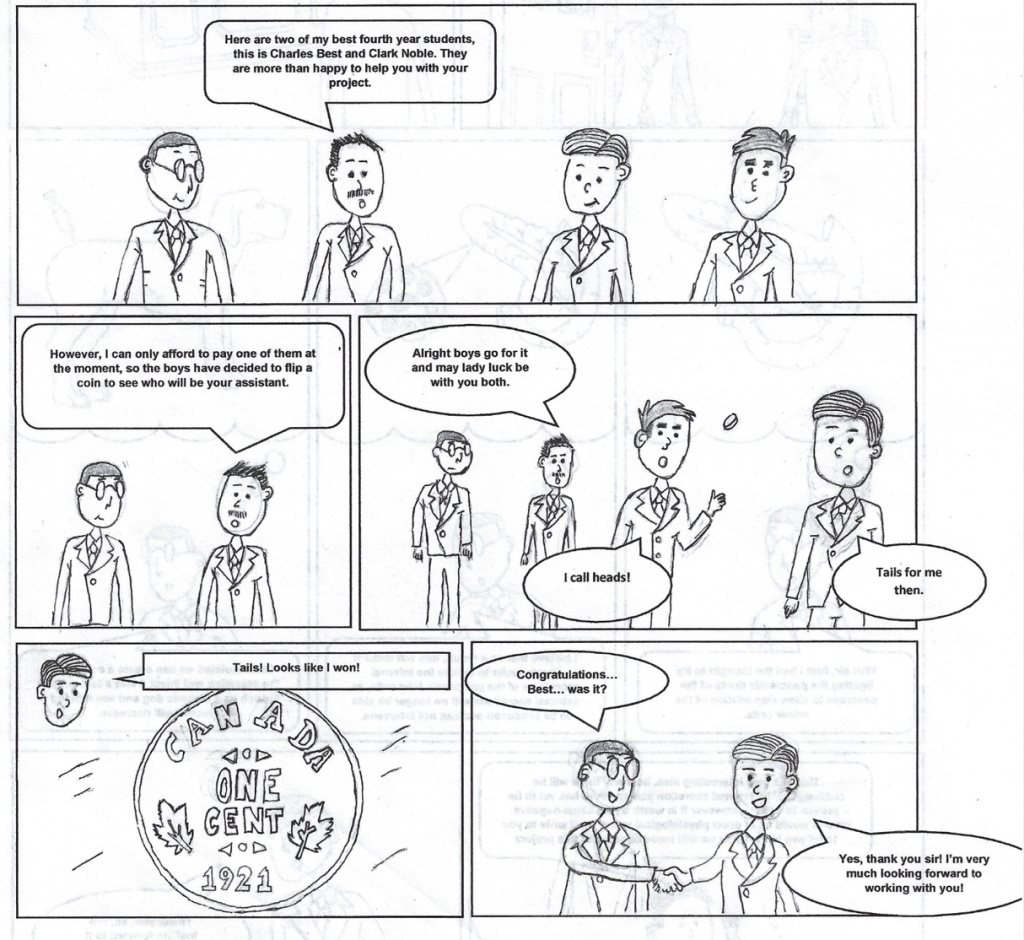 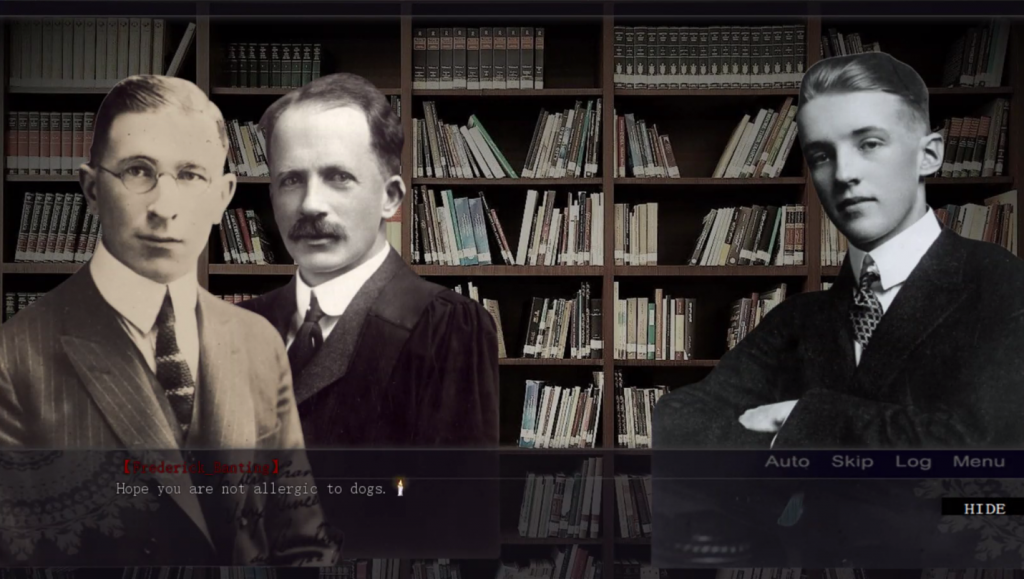 The fate of Banting and Best’s lab dogs struck a chord with many students, pet owners in particular. Emilia Missing wrote a comedic comic strip entitled “A Dog’s Purpose,” demonstrating Marjorie’s contribution to science, while Maria Erica Fortes recreated Banting’s own 1925 painting The Lab, adding Marjorie and redubbing the work The Imitation Lab. 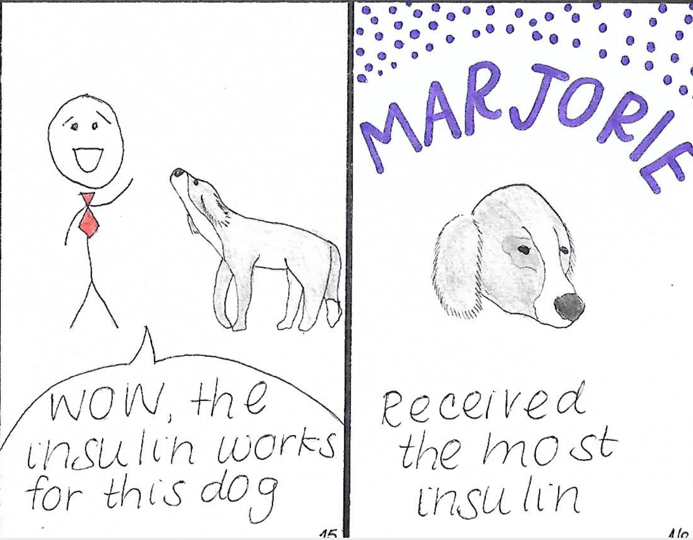 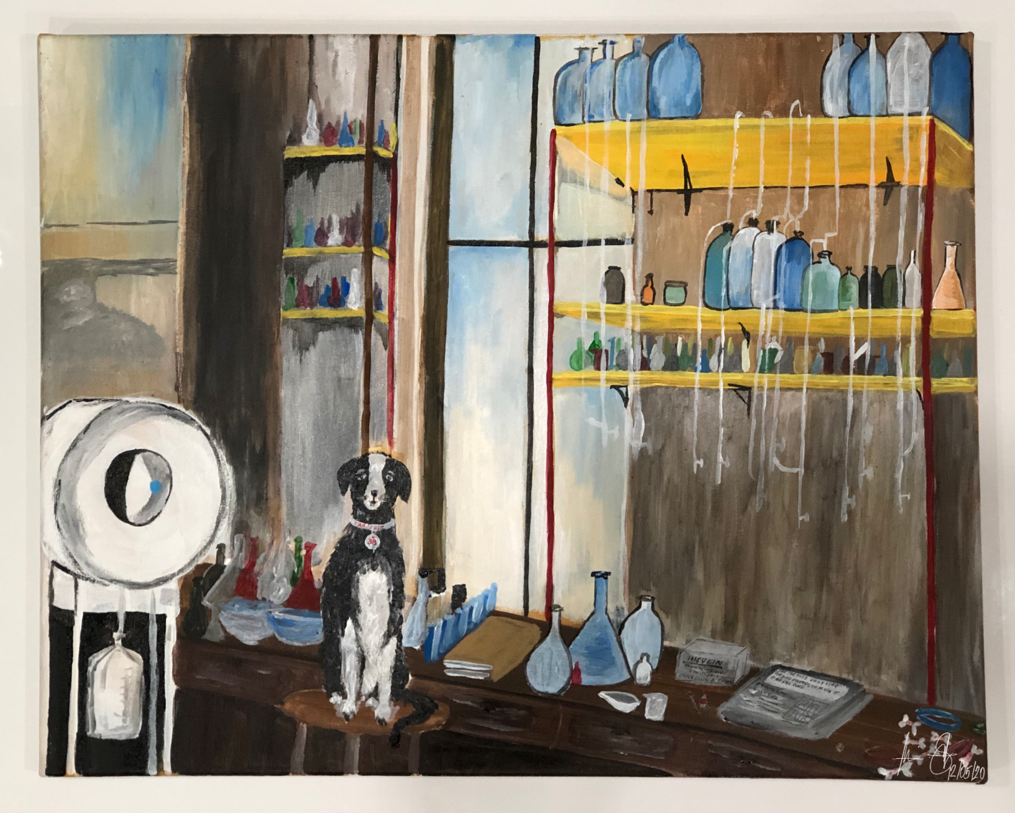 Students experimented with varied media: Katya Godwin designed original patterns and embroidered her lab coat with key events in the discovery of insulin: (1) Banting’s ‘eureka’ moment (islet of Langerhans, glucose molecule, lab dog, and the journal in which he scrawled down his idea in the middle of the night on October 31, 1920); (2) discovery at University of Toronto (pancreas, ligated ducts, protein structure of insulin); and (3) the connection of insulin with industry (Lilly’s company logo, insulin pump, money). 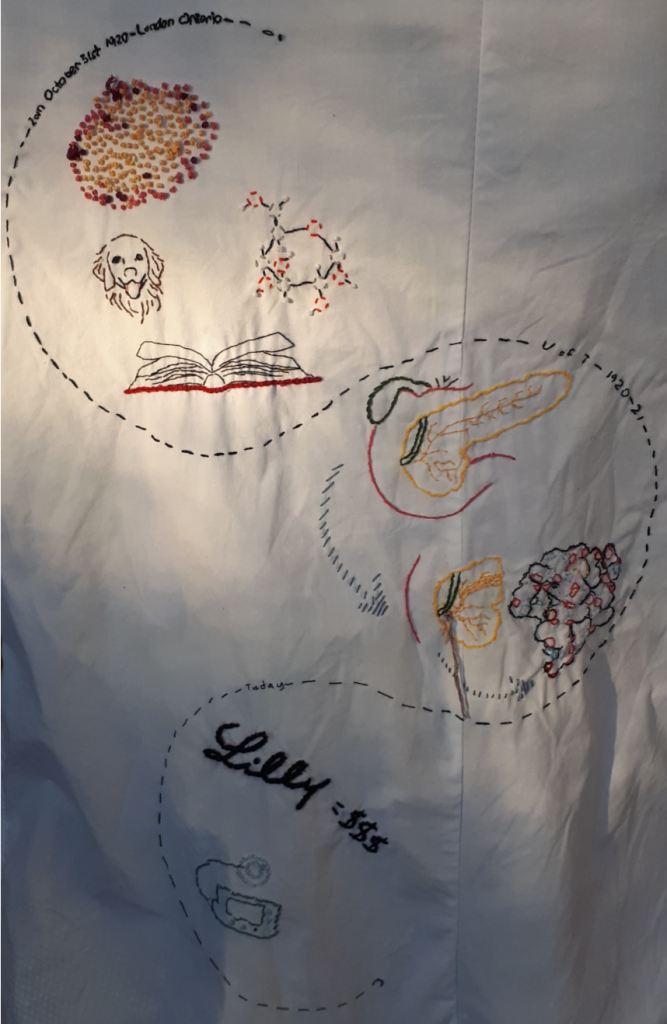 Lorena Vela created a children’s storybook and puzzles emphasizing the importance of tactility to children’s learning.

An Insulin Unessay – Storybook from Defining Moments Canada on Vimeo.

The contributions of supervisor J.J.R. Macleod and biochemist James Bertram Collip, who purified the insulin extract for human testing, were acknowledged in the students’ work. Caroline Phung and Estee Chan, in a series of illustrations with recorded commentary, represented Collip as a magician pulling a rabbit out of his hat to the amazement of Banting, Best, and Macleod. Collip’s experiments with lab rabbits were key to solving the mystery of the extract. 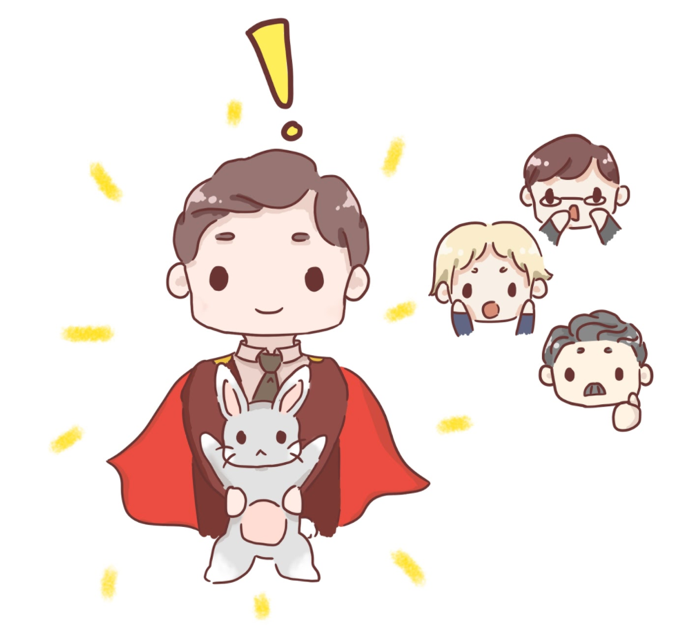 Lillian Phinney hid Easter eggs, including Egyptian papyri emphasizing the long history of diabetes, in her artwork of Collip, entitled The Slightly Forgotten. Collip’s contributions are less well known that those of Banting and Best, though not to the students of Anthropology of Health! 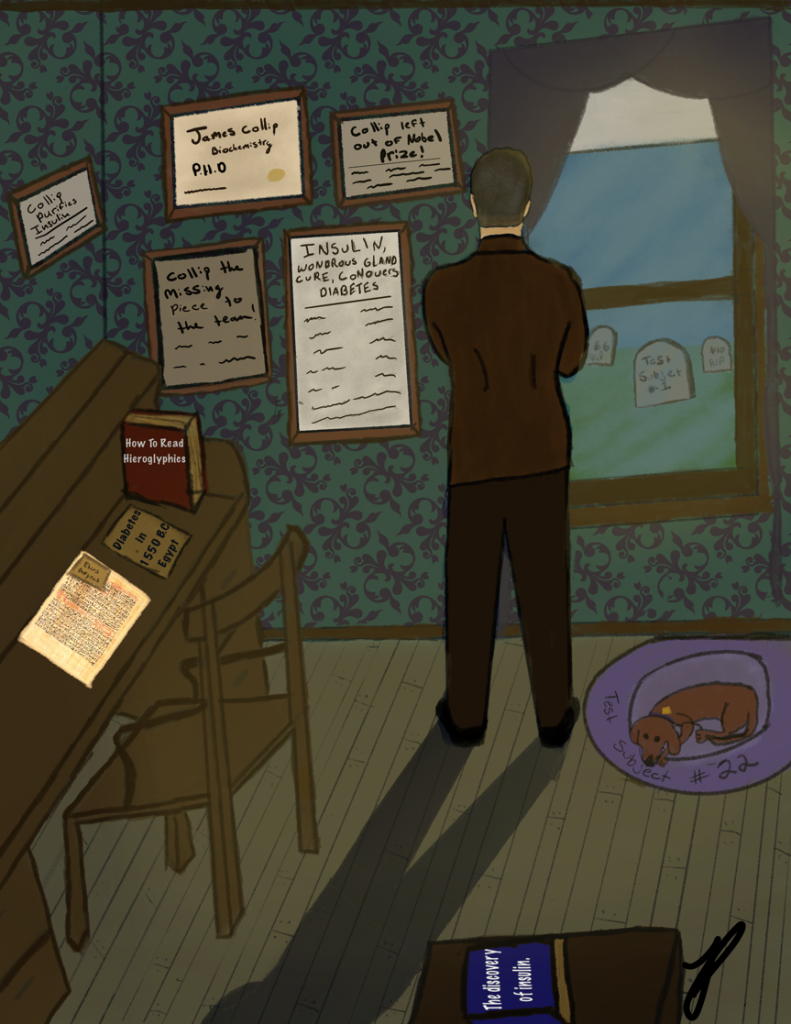 The Slightly Forgotten, by Lillian Phinney

Illustrated timelines (Salena Parso) and comics (Sharyar Mahmood) explored the history of diabetes pre-Banting, while Aysha Afzal’s set of infographics focused upon the contemporary legacy of insulin: there is still no cure for diabetes and socioeconomic factors influence access to care. 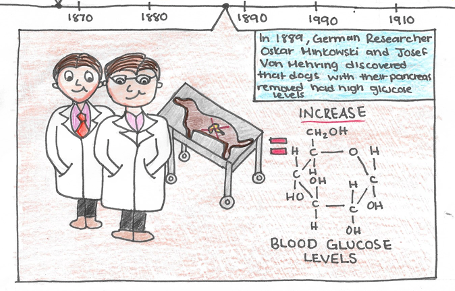 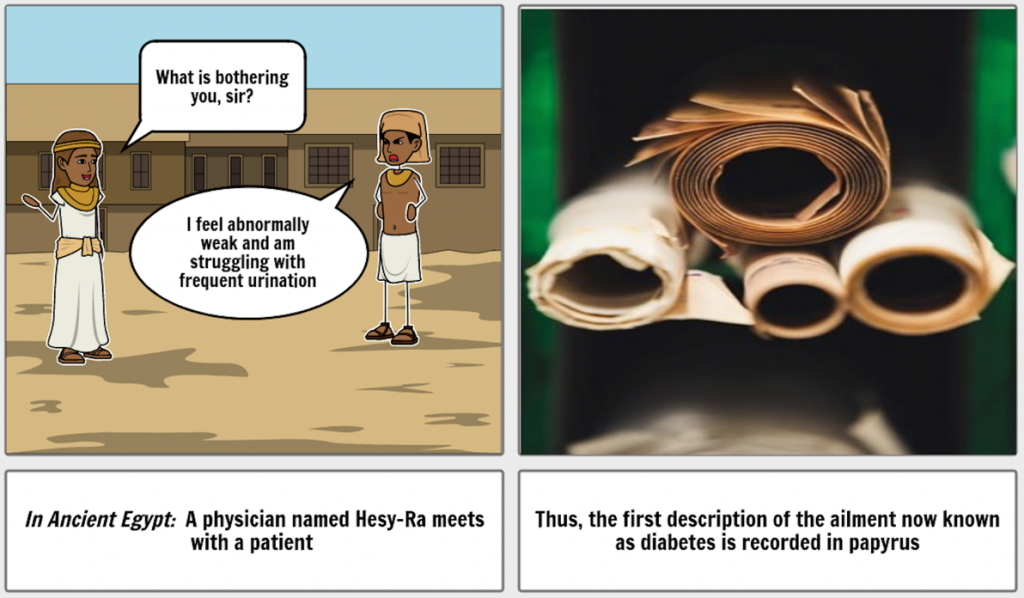 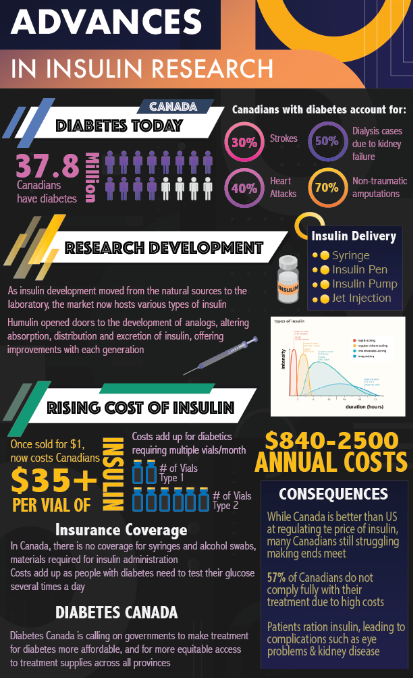 Nicole Ambrosi taught a history lesson through stop motion animation. In her reflection she noted that the movie is comprised of 681 individual photos, stating: “This is definitely one of the most time-consuming assignments I’ve ever done, with the weirdest work station possible, but overall it was a great experience.”

Shelby Scarpelli characterized three key conflicts in Banting’s journey (vs. his collaborators Best, Collip, and Macleod) as boxing matches in a black-and-white newsreel, integrating commentary concerning the progress of the research, complete with her dog acting as a commentator (video link here).

“Diabetes, the unstoppable siphoning of life. Mellitus, the honey that drew the ants, a whimsical addition by medieval physician Thomas Willis, centuries after the Greeks were gone. A sweet death sentence that began in the blood.”

Other assignments included podcasts, Animaker and Renderforest videos, poetry, and curated displays, representing the legacy of diabetes and insulin from Ancient Greece and Egypt to the present.

Discussions throughout the semester about assessment, fear, creativity, and challenge gave me a direct view into students’ learning processes. Some were in their final year of studies and expressed thanks for the opportunity to try a new format. Others said that they were only taking the unessay option because they could not imagine writing another paper. Several confessed that they were nervous of the unessay option and selected the essay as the ‘safer’ means of completing the assignment. Clearly this was not a magic bullet of assignment perfection. I was asked repeatedly “how will the unessay be marked?” It was clear that most students had perused the marking guide, which highlighted content and clarity of meaning. They were concerned with a more directly epistemological question: would I be marking these assignments ‘harder’ than if they chose to craft an academic paper? Or would it in fact be an ‘easier’ option? In creating the marking guide, I had drawn upon Ryan Cordell’s emphasis that the unessay must be “compelling and effective.”3 Was it clear (without first referring to the student’s written reflection) which three key events/people/objects the student had chosen? Could I, as a viewer, sense the students’ understanding of the topic? Were the students showing, rather than telling? By encouraging students to experiment I was giving them permission to fail. The inclusion of the reflection gave them space to express their intentions, providing a platform to display both their final product and their creative and research process.

Incorporating assignments such as the unessay empowers students to choose their best lens for approaching their learning. I naturally closed out many student Zoom calls this semester with: “I’m excited to see it! I trust you.” Though we have yet to meet in person, the bonds built this past semester, those of encouragement contextualized with our own pandemic place and time, are as meaningful as those I have experienced in the in-person classroom.

Commemorative activities relate naturally to discussions of place and time. The coming year will witness the centenary of truly colossal moments in medical history as we trace the research of Banting and Best over the summer of 1921. In 2021 we will also experience the largest mass vaccination program in Canadian history. The intersection of these two major health events provides an unmissable opportunity to engage students at all levels in contextualized discussions of individual health, access to healthcare, and health histories, topics which transcend both time and (virtual) space. The discovery of insulin is a topic that lends itself naturally to a speculative assignment such as the unessay. Much as Banting, Best, Collip, and Macleod harnessed trial and error in their quest towards a treatment for diabetes, many students in Anthropology of Health ventured something new in their learning. While an unessay may not be a productive fit for all topics, the themes of risk-taking and experimentation provide ample ways in for curatorial thinkers.