In the middle of March 2020, education for students in Ontario became a different reality. Learning in a classroom with peers was replaced with online learning as precautionary measures countering COVID-19. Students participated in learning at home, attending “google meets.” The postponement of extra-curriculars such as after-school activities, clubs and teams meant that the “busyness” of the week was now “quiet.”

For my daughter, Isabelle, this change was marked by a sense of loss. “Online learning is much different than in-school learning” she reflects, “because you are looking at a computer screen at a google meet, zoom etc.. thus, creating an environment with less engagement because it isn’t face to face.”

Distance learning offered an exciting opportunity to explore and to engage with questions new and old with deeper consideration than time usually offers. At different times, Isabelle and I often visited different points of interest near our home. These stops included historic buildings, churchyards and abandoned houses.

She would have many questions about the context of these places: Who lived there? What did it look like? What happened? 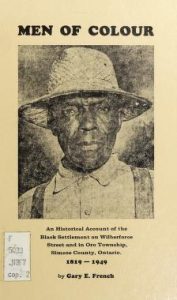 For more than twenty years I lived in a small, rural central Ontario community. I did not grow up on a farm, I was, however encouraged to help out on the local farms that surrounded our property. This involved planting, harvesting, cleaning cattle pens, haying and taking care of animals. Our home was located on Line 1, Oro Township in the County of Simcoe. Of historical significance, line 1 or Wilberforce Street was the location of a British government sponsored settlement of veterans from the War of 1812, specifically veterans of Captain Runchey’s Corps of Coloured Men.

Most of my neighbours at the time had lived along the Wilberforce Street/Line 1 their entire lives, with roots in Oro township extending back to the mid-1800s. Stories shared by this older generation told about the lives of different people who lived long this dirt road and the immediate area. While visiting the grandfather (then in his late 70s) of a friend, he related many stories about the house my family lived in.  Daniel Key (Grandpa Dan) also shared stories that included a reference to an African Canadian family living close to the forest near the house I lived in. These stories were related to me in the mid-1970s, by people who were born in the late-nineteenth century.

Interested in story, I remember listening intently and asked where the family lived, to which he replied “close to the end of the road, down by the creek.” There was only one possible location. Travelling line 1 extensively as a kid with a bike, the road stops at an intersection south of where I lived, due to swampy land. It was close to the intersection that I used to explore an old fieldstone foundation. 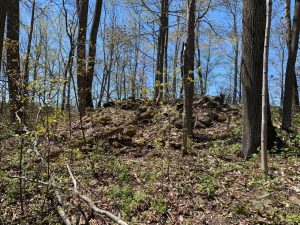 The Stone Foundation (photo by author)

This foundation located on Wilberforce Street or Line 1 had always interested me. I passed it many times as it was always on our way somewhere, riding bikes to see friends, travelling into town, helping farmers with hay or crops. Part of the mystery was trying to understand what the foundation could have been. None of my neighbours could give any answer so the question went unsolved. As I drove past the foundation years later with my daughter, I related what I knew and she had similar questions. With that in mind, we decided to try to find more information to help us.

In order to find out more information about the foundation, research began with what materials were available. Two print resources (The Story of Oro ed Joanne McEwan and The African Church by Tim Crawford) were available at home (libraries were closed). In The African Church we found a map of Oro Township that detailed the names of owners of different properties in 1871 (pg 7 – or Figure 1). The two books helped to provide a starting point for the foundation and who may have built it. In addition, the two resources also prompted a remembering of Dan Key’s story told four decades previous. 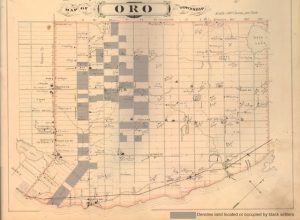 Using this map, it was determined that lot 21, concession 2 was where the foundation was located. In 1871 the property was owned by Daniel Hartwell. Excited that we had a name, we decided to look more closely at the resources. While continuing to read The Oro African Church, we came across more references to Daniel Hartwell. This information gave us the understanding that Mr. Hartwell was one of the first African Canadian settlers in Oro Township.

In 1811, Samuel Wilmot surveyed land along the Penetanguishene Road with James Chewett completing the survey of the rest of Oro Township. In 1819, settlers began to take up lots. At around the same time, the government of Upper Canada under Sir Peregrine Maitland sponsored settlement of soldiers from the War of 1812, specifically soldiers from Captain Runchey’s “Coloured Corps.” This corps was made up of free men and those that had escaped from the United States. They took part in many battles during the war.

The initial settlement occurred along Line 1 of Oro which also became known as Wilberforce Street, named for the British Lord who brought forward the abolition of the slave trade (not slavery) to British parliament. Very few African-Canadian veterans chose to take up lots.

In 1831, Samuel Richardson, a surveyor noted that “all but nine grantees had either failed to take up possession of their lots or had left the area.” In order to increase settlement to Oro, the government offered land to those who were “Friends of the Corp of Colour.” These lots were 50 acres and were mostly located in other parts of the township. By 1860, the population of the “Wilberforce Street” settlement was estimated to be about 100 people.

While research in archives for online records, making connection to place enhances what has been discovered. We approached questions of what people would have seen or have visited during the time Daniel Hartwell and his family lived at Lot 21. We decided to visit the different locations where the Hartwell family would have lived, worked, and interacted with neighbours. This includes Wilberforce Street and local villages of Dalston and Edgar, important social and economic centres for the area.

Wilberforce street, or Line 1 has changed very little with the exception of the road being paved in the early 2000s. Several of the farm houses and barns built prior to 1900 still remain. Few new homes have been built.  The physical landscape of line 1 has not changed a lot in the intervening time. There are large Maple trees that grow alongside the road which would have been saplings at the time the Hartwell family lived on this road. Open fields with crops or for grazing remain unchanged.

Going west on old Barrie Road is the village of Dalston. It may be that the Hartwells visited the village as it is located along the Penetanguishene Road, the major communication link for the area. The Dalston store (still exists) could have been a place where the Hartwells purchased items needed to run the property and help the family. The Hartwell children may have also attended the Dalston school which also still exists. 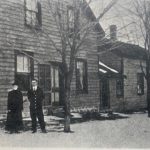 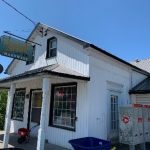 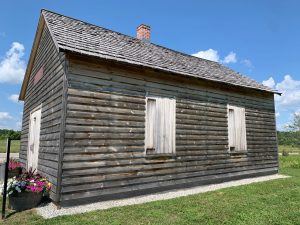 The discoveries, researching and learning about a foundation reminded of the importance of learning local history, often shaped by oral histories overshadowed by events that took place on a national scale. It also highlights the need for local history to have a more important role in curriculum.

The significance of Wilberforce Street was never explained at the local schools I attended, despite the fact that these schools are located within 10 km of these places. In addition, there were missed opportunities to highlight the contributions of the African Canadian veterans and settlers who came to Oro, through connections in the Ontario curriculum. The story and history of African Canadians was typically limited to the Underground Railway, but even then, local connections were rarely made.

Oral history was rarely shared in the classroom. Opportunities to learn were created mostly by talking with neighbours and family. A missed opportunity, as it is these stories that provide a local view not only to the daily lives of people but also the reactions to events outside of the community. Sharing of stories “humanizes” history, brings to life where print alone cannot.

Importance of learning about local story

My daughter’s and my research, using a foundation as the catalyst, impressed the importance of learning about local history upon me. Foundations are important because they teach you about the people who lived in the area, where they lived and everyday life. From what seemingly appears as a pile of rocks, we were able to learn about the contributions of the Hartwell family, who lived in Oro for nearly sixty years.

From Isabelle’s perspective: “People should learn about local history because it gives you an understanding of the people who lived there and what their area was before present day.”

Ian McCallum is a PhD student at the Ontario Institute for Studies in Education at the University of Toronto. Isabelle McCallum is a grade 7 student at Codrington Public School in Barrie, Ontario.