In November 2019, Structured Intervention Units (SIUs) were implemented by the Correctional Service of Canada (CSC) in all federal prisons to replace the old solitary confinement system. This new system was supposed to improve the lives of segregated prisoners who were often confined twenty-three and a half hours a day in small windowless cells with one hour of exercise and limited human contact. Inmates placed in the new structured intervention units would receive four hours out of their cells and at least two hours of meaningful human contact.

SIUs were introduced after the passing of Bill C-83 in June 2019. The bill was the government’s response to two lawsuits. The British Columbia Civil Liberties Association and the John Howard Society of Canada sued the federal government over the use of solitary confinement, arguing it was unconstitutional, increased inmates’ suffering, and discriminated against offenders who are Indigenous or have mental-health issues.

The primary legislative intent was to abolish solitary confinement as defined by the United Nations Mandela Rules (confining inmates for twenty-two hours or more a day without “meaningful human contact”). The new system was to impose an initial limit of no more than fifteen days of confinement and introduce judicial oversight or independent adjudication for any length of stay in segregation beyond that time.

But an independent report and investigation released a year later in October 2020 indicated that very little has changed with respect to the number of hours and days prisoners spend in solitary confinement in Canada’s sixteen federal prisons, and in fact Corrections Canada was unable to supply the correct data to a panel of academic experts reviewing the implementation of the new structured intervention units. It appears that SIUs are just a fancy new title for a barbaric practice that has been going on behind closed prison doors in Canada for a very long time. 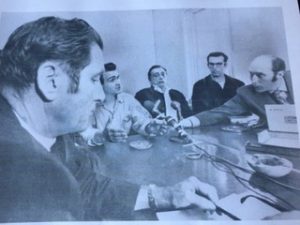 The Warden and Inmates Negotiate (Photo provided by the author).

Fifty years ago, on April 14, 1971, inmates at Kingston Penitentiary, Canada’s oldest prison, overpowered unsuspecting guards and instigated one of the most violent and destructive prison riots in our country’s history. Prisoners were protesting against decrepit living conditions, overcrowding, inadequate rehabilitation programs, and harsh punishments. Step out of line and you went to the “hole” an escape-proof cellblock located in a concrete bunker. There were twenty metal doors and behind each door an inmate was confined twenty-three and a half hours a day, with one half-hour of exercise in a small, segregated yard. Sound familiar?

Prisoner isolation and segregation was a long-standing management practice at Kingston Pen. Solitary confinement was intended to be a more civilized form of punishment since it left no physical marks on the body. It was supposed to inspire penitence in the criminal’s heart, but according to Charles Dickens, who visited Kingston Penitentiary in 1842, solitary confinement simply buried men alive. Though he believed the prison staff thought they were acting humanely, Dickens wrote:

“Very few men are capable of estimating the immense amount of torture and agony which this dreadful punishment, prolonged for years, inflicts upon the sufferers.”

But despite Dickens’ keen observations the practice continued unhampered. In the 1930’s, the Globe and Mail reported that one man had been kept in solitary confinement for twenty-three years at Kingston Penitentiary.

In 1982, the Supreme Court of Canada affirmed under the Charter of Rights and Freedoms that citizens’ rights also applied to inmates behind bars. The rights afforded to all Canadian citizens did not stop at the prison gates, and therefore prisoners should not be subject to cruel and unusual punishment. Yet fifty years after the Kingston Penitentiary riot and despite the United Nations rules on solitary confinement, Correctional Services Canada is still using the practice of segregation to manage their prisons and punish inmates.

The Kingston Penitentiary riot resulted in a federal inquiry to look into the causes of the insurrection. In their report, the members of the 1973 Swackhammer Commission referred back to another federal prison inquiry in 1938 – the Archambault Report – which suggested that the system within Canadian penitentiaries was “shrouded with absolute secrecy.” This approach to corrections, stated the report, was used to mask unfairness, inequity and brutality from public view. To remedy this systemic problem, the authors of the Archambault Report recommended that a board of visitors, such as existed in England at the time, be created to provide independent oversight. But in the eighty-three years since the Archambault Report, that recommendation has never been implemented.

And even the Office of the Federal Correctional Investigator created after the Kingston riot lacks authority to bring about any significant change to a closed correctional system. For more than twenty years, the office of the Correctional Investigator has extensively documented the fact that administrative segregation is significantly overused and is the most austere and deprivational form of incarceration that the state can legally administer in Canada.

As Ivan Zinger, the current Correctional Investigator has previously said, “People are sent to prison as punishment, not for punishment.” He has called for more openness in correctional services and stated, “It is my belief that transparency in corrections leads to greater accountability, better performance and improved public safety results.”

Kingston Penitentiary was shuttered in 2013, but the inhuman treatment experienced by many behind its thick limestone walls did not abate, it just moved down the road to Millhaven, Collin’s Bay, and all of the other federal penitentiaries in Canada. I would suggest little has changed in our correctional system and it is a system still shrouded in absolute secrecy. Therefore, it’s not surprising that those tasked with an independent review of the new SIUs were supplied inadequate data from Corrections Canada. Call it what you will, but a structured intervention unit is still “the hole,” and promised “new standards and practices” will remain elusive as long as Correctional Services of Canada is allowed to operate without external oversight. 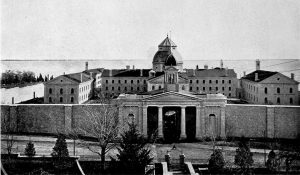 Murder on the Inside: The True Story of the Deadly Riot at Kingston Penitentiary by Catherine Fogarty tells the harrowing story of a prison in crisis against the backdrop of a pivotal moment in the history of human rights. Catherine Fogarty is a storyteller in print and on screen; she is the founder and president of Big Coat Media.