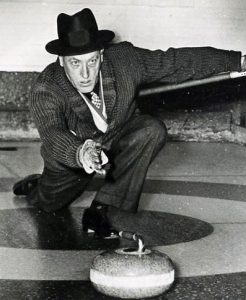 In recent years, the unwritten rules of sports have gotten a lot of attention. Whether it’s celebrations or expectations on rookies or what constitutes proper respect for your opponent, these ‘rules’ are increasingly recognized as antiquated and no longer relevant to modern athletes. In curling, the unwritten rules have always centered on the idea of the ‘Spirit of Curling’, which, generally, suggests that it is better to lose than to win unfairly.

Over the last 500 years, however, what constitutes fairness has changed. Things that are commonplace – even central to the modern game – were so controversial that those innovators who first used them in games were accused of cheating. From the Fenwick players putting a rotation on the stone to Ken Watson’s long slide, innovation in curling has been controversial. At the same time, however, other developments, like the evolution of the stone, have not been subject to nearly the same resistance.

In this episode of the History Slam, I talk with Game of Stones Podcast co-host Scott Graham about the fine line between innovation and cheating in curling. We talk about which innovations were deemed to be in violation of the ‘Spirit of Curling’, why others weren’t as controversial, and general resistance to new technology. We also chat about how things went from controversial to commonplace, the evolution of sweeping in curling, and what the next big innovation in the sport might be.

Sean Graham is a historian, Adjunct Professor at Carleton University, and contributing editor with Activehistory.ca