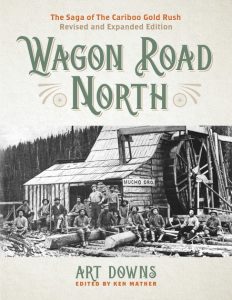 In 1960, Art Downs released Wagon Road North: The Saga of the Cariboo Gold Rush, which immediately became a best-seller. Relying primarily on photos to the tell the story of what happened after gold was found in the British Columbia interior, Wagon Road North was so popular that it was reprinted 5 different times through the 1960s. Updated in 1973 and again in 1993, it remains one of the province’s most sold history books. In looking at it in 2021, however, the absences in the narrative are apparent. As part of a colonial historiography, the book did not include Indigenous perspectives on the gold rush, nor did it explore the contributions of Chinese workers or the role of women in shaping life in the B.C. interior.

Over 60 years since its first edition, new additions by Ken Mather have sought to address these issues. With contemporary photos, revisions to the original text, and new sections to address the erasure that was clear in the original, this version takes the best of Art Downs’ research and brings it into the 21st century.

In this episode of the History Slam, I talk with Ken Mather about the updates to the book. We talk about the gold rush in Barkerville, BC, the popularity of Wagon Road North, and the updates included in the new edition. We also chat about what makes for good popular history, the challenge of using photographs in books, and how working in interpretation at historic sites can improve historical writing.

Sean Graham is a broadcasting historian, an Adjunct Professor at Carleton University, and a contributing editor with Activehistory.ca