By Laura Oland and Erin Isaac

When Ministers Island (known to the Passamaquoddy for centuries as Consquamcook, before the “Minister,” Reverend Samuel Andrews, took up residence there in the 1790s) became a National Historic Site in 1996, the designating body’s main interest was in the island’s association with Sir William Van Horne. 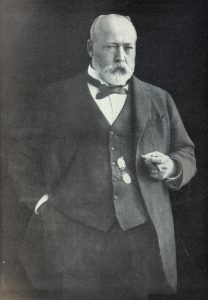 Van Horne, the Canadian Pacific Railway president who oversaw the transcontinental railway’s construction, purchased 150 acres of the island’s over 500 acres on which to build a summer home in 1891. Over time his family came to own the entire island.

Van Horne’s summer home, called Covenhoven, had previously been submitted to, and rejected by, the Historic Sites and Monuments Board of Canada in 1958. It is not shocking, then, that early interpretation of the island was dominated by interest in Van Horne’s estate and the personal history of this purportedly great man.[1]

The island’s history is inextricably bound up in Van Horne’s story. He designed Covenhoven himself, its many rooms and grounds reflect his interests in, and passion for, antique collecting, painting, and gardening, and the several buildings constructed as the farm grew attest to his careful management of the estate. While older structures—mainly the minister’s house built in 1788—still stand on the island, it is unsurprising that the first building restored and opened to the public was Covenhoven. Even in Van Horne’s lifetime, the house and its grounds drew visitors and tourists to the island and his presence in St. Andrews helped make the small seaside community a summer retreat for his peers by the end of the 19th century.

But, since the island first opened to the public as a National Historic Site, the stories we expect from our heritage sites and museums have changed—what we’ll call the “Downton Abbey Effect.”

Where previously visitors may have been satisfied coming away from a museum like Ministers Island with a wealth of knowledge about its patriarch and, perhaps, a few anecdotes about his wife and children, we now expect more. For grand estates like Covenhoven, there is an appetite for information about the women, children, and staff who lived and worked there, and in Canada, we also hope to learn about the land’s past and present ties to Indigenous communities.

While the focus of tours offered at Ministers Island still gives much more detail about Van Horne than the others who lived and worked there, the museum has been expanding its interpretation as resources become available.

On Thursday July 22, Erin had the pleasure of spending the day with the Ministers Island’s Museum Intern Laura Oland and Susan Goertzen, who has worked on the Island since 1998.

In this month’s episode of Historia Nostra, Erin considers how and why the history told at Ministers Island is changing as well as why change in museums like this is slow.

And, in our bonus episode, Erin lets Susan and Laura do the talking and takes you along on our private tour of the Island.

Laura Oland (PhD Student, Concordia University) is an art historian currently working as the Museum Intern at Ministers Island. Oland graduated from Acadia University in 2017 with a Bachelor or Arts Honours in History with a minor in Classics, and later from the University of Glasgow in 2018 with a Masters in Letters: Art History Dress and Textiles. Currently, Oland’s research is on Alice Lusk Webster, the woman who founded the art department at the New Brunswick Museum in the 1920s and 1930s.

A version of this post also appeared at All Aboard with Laura (https://allaboardwithlaura.ca/) on 18 August 2021.

[1] Though, should be acknowledged that the Island’s shell middens were recognised and protected as a National Historic Site in 1978.