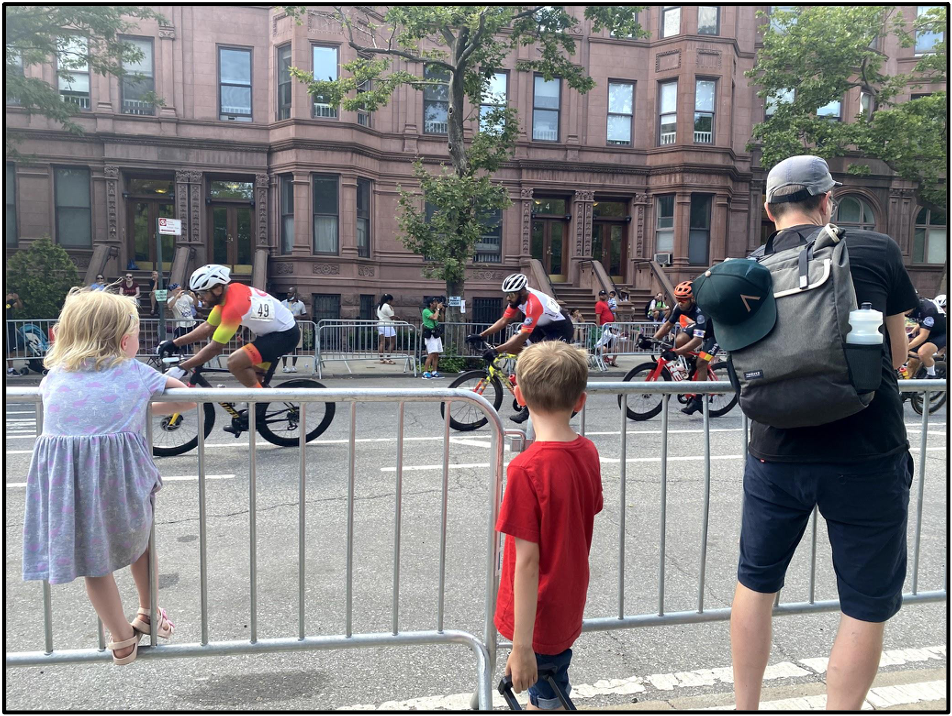 Watching them fly by. Harlem, 2021. Photograph by Rosemary Lennox.

This is the sixth in a series, “History En Vélo,” about cycling and thinking historically, shared with NiCHE.

We do it every year, if we can. It’s only an 80 minute train ride on the Metro North from New Haven to Harlem, and Father’s Day seems like a perfect excuse to explore the city and spend the afternoon watching a bike race: the Harlem Skyscraper Cycling Classic. This year, the kids (now 5 and 7) had more questions about where we’re going and why things are like they are. These aren’t the impossibly insightful queries from children that parents post on Twitter, but rather the simple curiosity of young people put into words. We could let them go without engaging (which, let’s be honest, we do all the time), but now and then we take the opportunity to respond as thoughtfully as we can. It turns out something as innocuous as cycling and watching a bike race be a portal to discussions about American history.

As ex-pats living in the US since 2012 (“it’ll be just a few years,” we told ourselves when we first moved) (Sigh ~ ed.), we’ve had to adjust. A decade later, now with two kids in tow, things have become more complicated as we navigate the wonders and pitfalls of American living. When COVID hit, we fled back to Canada for three months, returning to the US just as the George Floyd uprisings were cresting. Our kids had questions – lots of them – and we had to find answers.

As a family, we’ve had lots of discussions while pedalling around Connecticut and New York state. The “funny” place names along our routes (Quinnipiac University, Hammonassett Beach, Taconic Parkway) and even the names of the beers we – the adults, that is – drink at mid-ride stops (Narragansett) give us endless opportunities to talk to them about the region’s Indigenous past and present and the realities of settler-colonialism, scaled appropriately to their elementary-school brains. Since the summer and fall of 2020, we’ve noted the importance of Black Lives Matter signs on our lawn and in our neighbourhood, explained the importance of elections and protests, and explored our town and its surroundings as can only be done on a bike.

These discussions put our trip to Harlem this year in a new perspective. Armed with more information and opinions, our son especially started asking about the city and the race itself. He noted, with a seven-year-old’s innocence and matter-of-factness, that there were way more Black people around 125th Street than where we live. He loved the energy of the neighbourhood, and I’m sure one day I’ll explain why the park (around which the racers “go fast and turn left” in traditional criterium fashion) is named for Marcus Garvey . While our daughter was more interested in the swings and the promise of ice cream, our son did notice that most of the men and women lining up to race were white. And so we had a conversation about race and wealth and the history of capitalism. He’s too young for Marx or Frantz Fanon, but he does understand that in the United States (and Canada, of course), white people used to own Black people. He is learning that white wealth and opportunity was built on exploited Black labour and stolen Indigenous land, and that the horrors of that system are present today in the vast income inequality that often maps onto racial lines. Bike racing, like hockey, is expensive. Bikes can cost as much as cars, and consequently the financial realities of the sport serve as a racial barrier. And as a predominantly white sport, professional cycling has yet fully to reckon with the racism built into its architecture. Bicycle manufacturers, like Fuji and Specialized, faced criticism when videos emerged of police forces using their bikes as weapons against protestors in the summer of 2020.  And yet cycling in its purest form is inclusive, and a bike offers its rider – any rider – a sense of freedom. For those of us who ride for pleasure and follow professional cycling, the tensions between these two realities are evident.

I had hoped this year that our kids would get to see the riders from L39ION (pronounced LEGION), a cycling team from Los Angeles, race in Harlem. The team, founded by brothers Justin and Corey Williams, has taken the American cycling world by storm. With a multicultural roster of riders, a focus on gender equality, and a strong mission of social justice,  L39ION has helped put American crit racing on the global map. Their sponsors are top American brands, including luxury cycling apparel company Rapha (a British brand now owned by…the Waltons). The team has won national and state championships and dominated the elite crit circuit. They have also kept their attention on the importance of race in American history. This year, the team swept the races at Tulsa Tough, a weekend-long cycling festival in Tulsa, OK. As the only Black-owned team in all of professional cycling, Justin and Corey Williams dedicated their win (just days after the 100th anniversary of the Tulsa Massacre) to those killed in the race riot and to the promise of a resurgence of Black economic success. It’s no coincidence that Rapha just this year published a book called Desire, Discrimination, Determination: Black Champions in Cycling. These are the voices that the sport needs to elevate; they are showing a new generation of riders that sport equity, like racial and economic justice more generally, facilitates the success of those usually left behind the barriers.

Teams like L39ION, and races like the Skyscraper Classic, are about more than cycling. They are about community building, opportunity, and equity. Bicycles change lives, and riding a bike opens up the world. But that world is complicated and too often organized to benefit the few at the expense of the many. Bike races, race, and American history are more entangled than we might think. But the kids are starting to see it, and kids these days are a force to be reckoned with.