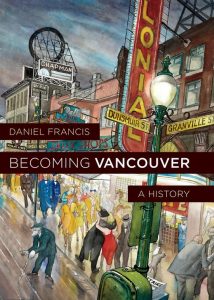 The first time I was fortunate enough to visit Vancouver, it was October and the weather was unseasonably cold. It was a damp cold – the type that feels like it sticks to you – so I spent 4 days struggling to get warm. Having lived in Regina since that initial visit to the west coast, I now tell people with great confidence that -40 on the Prairies is a walk in the park compared to 0 in Vancouver.

That seeming contradiction, of a temperate place whose location makes cold temperatures feel much worse, is but one source of tension that exists in Vancouver. The city boasts the highest housing prices in Canada but is also home to what has been called the lowest income postal code in the country. It features a diverse local population, but has a long history of racial strife. Its economic growth is tightly connected to resource extraction, but the environmental movement is closely associated with the region.

These, and many other, sources of tension in Vancouver are central in Daniel Francis‘ new book Becoming Vancouver: A History. While taking a chronological approach to the city’s past, Francis focuses on the points of tension that have come to shape the local culture, politics, and economics. Motivated by a desire to highlight the city’s past in an cultural environment where its history is not always front of mind, he manages to craft a local history that highlights key themes that influence civic life in communities across the country. From housing prices to opioids to discriminatory policies, Becoming Vancouver delves into national issues within a well-written local history.

In this episode of the History Slam, I talk with Daniel Francis about the book. We discuss civic history, Indigenous communities in what is now Vancouver, and the city’s early development through natural resources. We also chat about housing prices, inequality, racism, 1960s protests, and the city’s cultural growth.