From 1948 until his retirement in 1994, Dr. Gerhard Herzberg conducted ground-breaking research at the National Research Council of Canada (NRC). As his close friend and biographer Boris Stoicheff has noted, Herzberg’s early period at the NRC– culminating in his Nobel win in 1971 — were truly “the golden years” of his career.[1] Recognizing the essential nature of his work, the NRC offered him the time, resources and freedom to pursue any research of his choosing. (The NRC’s intellectual environment was challenged during Herzberg’s later years.) This latitude contrasted the constraints he’d faced previously at the Yerkes Observatory in Chicago from 1945 to 1948. Indeed, this episode further highlights the vital role that Canadian institutions played in Herzberg’s scientific work.[2] 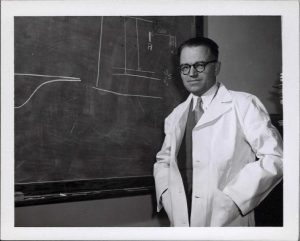 When Herzberg first arrived in Canada, he spent 10 productive and enjoyable years as a professor at the University of Saskatchewan. But in 1945, Yerkes Observatory at the University of Chicago offered him a job. At first, this opportunity seemed like “the ideal situation” for Herzberg as he would join a larger institution connected closely to U.S. universities.[3] As Stoicheff notes, it would enable him “to become an astronomer, a career he had dreamt of long ago.”[4] Yet even while he was negotiating the job offer, difficulties began to crop up. The university could only hire him as an associate professor, a step down from his position in Saskatchewan. Nevertheless, Herzberg accepted the position, and set out for Williams Bay with his family.

The intellectual focus of the Yerkes Observatory differed greatly from Saskatchewan. Its research program focused on astrophysics, and was primarily concerned with understanding the properties of astronomical objects. Herzberg and his wife Luise quickly settled in at Yerkes, with Luise working as a volunteer research associate while Herzberg set up his own laboratory, for which he received $8,000 in funding. However, while Herzberg succeeded in establishing his laboratory, the government turned down his application for additional funding for a research team, even while other spectroscopists–who did not focus on astrophysics– succeeded. Herzberg wondered “whether the importance of spectroscopic work for astrophysics was appreciated” and “if he had made the right decision in coming to Yerkes.”[5] Indeed, while Herzberg was still able to conduct his research, he was not able to expand his research group. His initial concerns were further intensified by the fact that the Department of Astronomy was about to undergo a major reorganization.

Despite Yerkes’ financial and institutional constraints, Herzberg enjoyed his work there and produced significant results– specifically “observing the quadrupole spectrum of hydrogen.”[6] However, after only three years, Herzberg and his family returned to Canada. Herzberg’s biography highlights that a number of elements contributed to his decision to leave Yerkes. In addition to funding constraints, and concerns about the recent departmental reorganization, Herzberg and his family genuinely missed Canada and the academic community that was there. More simply, the NRC (as we will see soon) presented Herzberg with an offer he simply could not refuse.

Later in his life, Herzberg himself reflected on his time at Yerkes and how it differed from the NRC:

[…] the observatory was not all that well funded as such from the university, and the funds were quite limited. On the other hand, NRC offered at that time almost unlimited funds, at least unlimited for the kind of things that I was interested in doing. And complete freedom to do what I wanted to do. At the observatory of course I always felt I had to do something that had something to do with astronomy. And so, there were a number of considerations of this sort that made me wonder, whether I had done the right thing. I never regretted the three years I spent there. For one thing, I was really quite successful with regard to hydrogen and oxygen. – Gerhard Herzberg, 1989 [7]

The National Research Council of Canada and “the Golden Years” [8]

Herzberg joined the NRC during an opportune time for science in Canada. Following World War II, the NRC became an important scientific force that drove “science to greater heights in academia, government, and industry.”[9] Herzberg became a vital member of this institution, an outspoken advocate of “the pursuit of science for its own sake.”[10] From the time he went to work at the NRC, he had the freedom to pursue basic research that might not directly or immediately bring economic benefits or technological applications. As Stoicheff puts it, “At the NRC, Herzberg would realize his full potential.”[11]

Dr. John Spinks, who had brought Herzberg to Saskatchewan in 1935, helped facilitate the job offer from the NRC but it was a letter sent by Dr. E.W.R Steacie– the Director of the Division of Chemistry which articulated the tremendous value they believed he would bring to Ottawa. In 1947 Steacie sent a letter to Herzberg, in which he asked, “Is there any possibility that you would be willing to work here if a suitable offer could be made? You would, of course, have complete freedom to do what you wished, and I am sure that anything you wanted in the way of equipment could be obtained.”[12] He further emphasized that “it would be of inestimable value to us if we could get you here.”[13]

Herzberg’s first position was as a principal research officer in the Division of Physics. The NRC had offered him this role in the hopes of establishing “a major spectroscopy laboratory for basic research.” [14]  It was the opportunity Herzberg had been seeking for his entire career. No longer did he have to worry about financial constraints that might limit his ability to build a research team or acquire the necessary equipment. During his first years at the NRC, he received $25,000, “with an additional $50,000 over the first two years for installation of the laboratory,” as well as additional funds to hire a research team.[15] Such funding, Stoicheff wrote, “would have been impossible to obtain as a university professor through the usual granting channels.” [16] There were, crucially, no strings attached. Herzberg could “carry out research in fundamental physics and allied subjects, with the choice of problems left entirely to him.”[17] 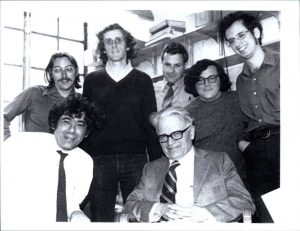 The spectroscopy lab Herzberg built with NRC support was “second to none in quality,” and had “propelled Canada into the forefront of research in molecular spectroscopy and structure,” according to Stoicheff.[18] It was here that Herzberg and his team applied modern techniques to study the fundamental problems of spectroscopy, as well as simple gaseous molecules and their structures. This lab was where some of the first lasers in Canada were built. In the course of his research, Herzberg discovered the spectra of numerous important free radicals– most notably CH2 and CH3, known as “the cornerstones of organic chemistry.”[19] Herzberg’s work on free radicals, in fact, contributed greatly  to his 1971 Nobel Prize.

To denote the important impact that institutional support and scientific freedom had on his work (even prior to his Nobel Prize win) Herzberg, in 1965, reflected on what distinguished the NRC from other research institutions:

Judging by the comments that I have heard from responsible scientists all over the world, the laboratories of the Research Council have developed into one of the best research organizations in the world. And what is the reason for the success of this development? […] It is primarily the flexibility of the organization, the capacity to depart from rigid lines of departmental organization, and particularly the overriding philosophy that it is the working scientist themselves who should largely determine what is to be done. – Gerhard Herzberg, 1965 [20]

While Herzberg’s Nobel Prize in Chemistry was a turning point for both his career and his discipline, the award also represents a defining moment for Canadian science as it highlights how important Herzberg’s intellectual environment in Canada was. The next post in this series will continue to explore Herzberg’s role in Canadian science history, and investigate what happened when Herzberg won the Nobel Prize.

Defining Moments Canada is an online Canadian heritage organization dedicated to commemorating ‘definitional moments’ in our shared history through trans-disciplinary education initiatives. This organization has hosted a number of commemorative projects such as Spanish Flu, VEDay75, Juno75and Insulin100. DMC’s approach is informed through Curatorial Thinking and the SASS framework (Selection, Archiving, Sense-Making and Sharing). This process encourages students to critically examine research material and consider their own “position in time and space” in relation to the narratives they study (Mant, 2020), Moreover, with the onset and continuation of the COVID-19 pandemic, DMC is advocating for the re-conceptualization of education to promote interdisciplinary or “syndemic” thinking.

Gerhard Herzberg, “Remarks on the opening of the Queen’s University Physics Building 14 May 1965,” in The Value of Science in Society and Culture: Selections from the Speeches, Essays and Articles of G. Herzberg, eds. A.M. Herzberg and P. Dufour (Kingston: Queen’s University, School of Policy Studies, 2019), 13-24.

[2] For the important role played by the University of Saskatchewan, another Canadian institution see this blog post.

[7] Interview of Gerhard Herzberg by Brenda P. Winnewisser on 1989 March 2,

[10] Gerhard Herzberg, “Remarks on the opening of the Queen’s University Physics Building 14 May 1965,” in The Value of Science in Society and Culture: Selections from the Speeches, Essays and Articles of G. Herzberg, eds. A.M. Herzberg and P. Dufour (Kingston: Queen’s University, School of Policy Studies, 2019), 14.