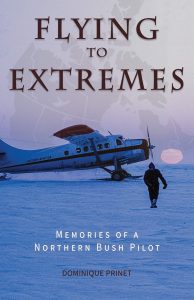 If you read any edition of the Year in Review (100 Years Later) series, you’ll notice that I, to the great frustration of my co-author Aaron Boyes, insist on including advancements in aviation each year. There is something that I find completely riveting about flying – that we can get into a metal tube and a few hours later be on the other side of the world is remarkable. Trips that 200 years ago would take years can now be done in under a day. And yet, despite the complete sense of awe that I get whenever I watch planes (I spent a summer during undergrad working on the airfield at Pearson International Airport, which was an amazing plane-spotting experience) people can get so mad during the process.

Despite that, I am always excited to learn more about aviation, which is why I was so looking forward to talking with Dominique Prinet, who worked as a pilot in the 1960s and 1970s. Based out of Yellowknife, he flew throughout the north of Canada. From landing on both lakes and skis, surviving near misses when fuel ran short, and navigating the ever-changing weather without the benefit of modern equipment, Prinet’s tales of northern flying highlight the danger and thrill of aviation at this time. Far away from his childhood in France during the Second World War, Prinet fell in love with the people and environment of a region where in the summer flying by sight is a 24-hour possibility and in the winter the unseen danger of ice accumulation on the aircraft is a constant nerve-wracking presence.

In this episode of the History Slam, I talk with Dominique about his experience flying in the North, as told in his book Flying to Extremes: Memories of a Bush Pilot. We chat about Dominique’s entry into aviation (7:16), the skillset required to be a pilot (11:28), and the day-to-day of flying in the North (15:26). We also discuss Dominque’s love of the region (23:15) and a few of the dangerous situations in which he found himself through his career (34:23).