There is a small house in downtown London, Ontario that looks ready for the wrecking ball. If you walk by, it would stand out only for its state of disrepair. A security fence surrounds it. 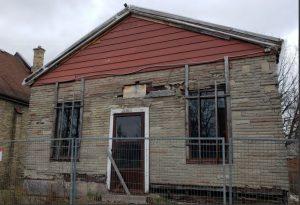 About a year ago, the London and Middlesex Heritage Museum – of which I am currently the Board Chair – received a letter asking whether our museum would be willing to accept this building as a gift.

My heart leapt at the opportunity.

The London and Middlesex Heritage Museum operates Fanshawe Pioneer Village, a living history museum that interprets the city’s and surrounding county’s histories between 1820 and 1920. This building – despite its state of disrepair – represents histories that remain poorly known and yet were critical to weaving together the fabric of London’s civic life from the time it was built – in 1848 – right through to the present.

Known locally as the Fugitive Slave Chapel, this small building is one of the few tangible connections to London’s early Black community. Built seven years before the city incorporated, this place became the centre of community for the people of the Hollow, as the neighbourhood was known at the time. From 1848 to 1869, the building was home to the congregants of the African Methodist Episcopal Church (the British Methodist Episcopal Church, after 1856).

This building has important histories to tell.

From the founding of the Wilberforce settlement in 1829 to the creation of the Canadian League for the Advancement of Coloured People a century later, this small building tells powerful histories of how Black Londoners built and strengthened community over their near 200 years living in this region.

Some of these stories – like the Wilberforce settlement – are about freedom and oppression and the tensions that strained North American politics during the mid-nineteenth-century fight against enslavement and forced labour.

In 1858, for example, just a few blocks away from the Chapel, a young boy – Sylvanus Desmarest – was kidnapped, put on the train for the United States, where he was to be enslaved. It was an attentive bystander who called down to the Chatham Vigilance Committee after the train had departed in the hopes they might save the boy. They stopped the train and freed Desmarest.

Other stories demonstrate the community’s successes.

Richard Berry Harrison, who became one of the most prominent actors of the early twentieth century, likely attended the chapel in his youth. In 1864, Harrison’s parents worshiped at the British Methodist Episcopal Church. Though Harrison’s family left the city for Detroit when he was in his late teens – due to anti-Black racism – the talents he honed on London’s streets landed him on the cover of Time Magazine in 1935. 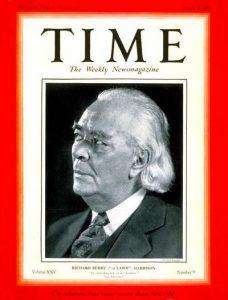 These stories are not well told at Fanshawe Pioneer Village. It is easy for visitors to come and go without understanding the important role that Black communities in London and Middlesex have played in shaping our region’s history. The message that many take away from a museum like the Village is one of a fairly homogenous White, middle class, history.

This is a longstanding critique of Pioneer Villages that Métis/Cree professor Jesse Thistle develops well in his film kiskisiwin – remembering. The film calls attention to how Pioneer Villages tend to tell only a very narrow slice of the past, reinforcing cultural biases and norms that make it difficult for some individuals and communities to find a place in society. Thistle provided some background to the film here at Active History in 2017.

The problems that Thistle points out are problems with which every Pioneer Village in North America needs to grapple.

At Fanshawe, we have tried to address this through our onsite interpretation, but the reality is that – at a built heritage museum – buildings convey the message.

As we begin to fundraise for this project, we have built new partnerships with organizations like the London Black History Coordinating Committee, Black Lives Matter London, and the local chapter of the Congress of Black Women of Canada. These partnerships dovetail nicely with ongoing board-level discussions at the museum about governance, equity, diversity, and inclusion. There is more going on here than just the moving and the adding of a building to our museum’s collection.

As a site that welcomes thousands of school children each year, making these changes at Fanshawe Pioneer Village promises to have an impact beyond our museum. As the Ontario Black History Society’s #BlackedOutHistory campaign well demonstrates, when it comes to Black histories, the Ontario history curriculum is “woefully inadequate and relegates the Black presence in Canada to the margins.” Making these changes, and welcoming this building to Fanshawe Pioneer Village, can help ensure that Black histories are core parts of the curriculum.

So, does a single building matter?

In this case, the answer is ‘yes.’

Before this project can happen, though, we need your help.

Like all museums, community organizations, and not-for-profits, we do not have a cash reserve with which to move and restore this building. Before Fanshawe Pioneer Village can move forward, we need to raise $300,000. Donations to the project can be made through the London Community Foundation.

Thomas Peace is an associate professor of history at Huron University College, co-director of the Huron Community History Centre, and chair of the board at the London and Middlesex Heritage Museum. He is also an editor at ActiveHistory.ca.