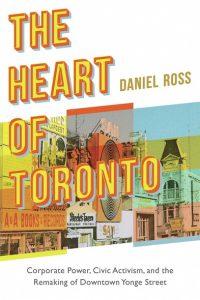 If you’ve visited Toronto for any length of time, you’ve probably found yourself on Yonge St. Starting on the shores of Lake Ontario, the street includes theatres, the Eaton Centre, the Air Canada Centre, and one of the city’s subway lines. Every day, thousands of people head to the street to work, shop, and socialize. As with any major street, however, Yonge Street has undergone significant changes over the past 70 years. From questions over accessibility and transportation to debates on the morality of certain commercial establishments and their clientele to reflecting Toronto’s emergence as the most prominent centre within Canada’s business community, Yonge Street has been a place where broad questions of power, community, and economics have played out from block to block.

That a such a prominent street would tell a city’s story is not necessarily unique to Toronto. In communities around the world, certain streets take on great meeting for their communities. Wherever you live, there is, very likely, a destination street where people have long gathered. So while the story of Yonge Street is specific to the circumstances of Toronto, the themes that emerge from its history can be found in cities and town across Canada. At the same time, however, the specifics of Yonge St, including its fame (or infamy depending on your perspective), and how its development influenced decision-making in other urban centres adds several layers to its history.

That history is the subject of Daniel Ross’ new book The Heart of Toronto: Corporate Power, Civic Activism, and the Remaking of Downtown Yonge Street. Tracing the street’s history in the post-Second World War years, Ross examines how it represents modern urbanism. As the city changed, Yonge Street changed with it. As power dynamics across the city changed, those who had a voice along Yonge Street changed. And as economic trends changed, the street’s landscape changed to capitalize on new markets. Within these changes, tensions emerged and debates played out against the backdrop of significant social and economic transformations. In telling these stories, Ross weaves together the local with wider societal shifts to tell a Toronto-story, the results of which reverberated in communities throughout North America.

In this episode of the History Slam, I talk with Daniel about Yonge Street, its transformation, and the book. We discuss the romantic image of Yonge Street and its place within Toronto (5:50), the debate over transportation and the addition of pedestrian spaces (17:20), and the controversy surrounding what was known as ‘Sin Strip.’ (20:51). We also chat about who had sway with city officials when making decisions for the street (32:05), the importance of the Eaton Centre (41:00), and the benefits and challenges of using the street to study the wider history of Toronto (44:01).