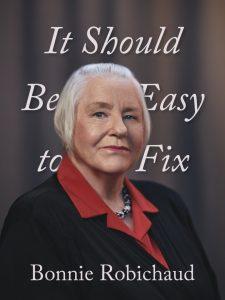 On July 29, 1987, the Supreme Court of Canada issued its ruling in the case Robichaud v. Canada. In its decision, the court noted that the Canadian Human Rights Act places “responsibility for an organization on those who control it and are in a position to take effective remedial action to remove undesirable conditions.” For Robichaud, the case was part of an over decade-long effort for justice following her experience working at the Department of National Defense. Having started as a cleaner in 1977, she was sexually harassed by her supervisor, but the Department did not take action, instead trying to fire her. So through her union, she filed a grievance and fought for her right to a safe workplace. The case went through many levels of the legal system, but ultimately the Supreme Court’s precedent-setting decision was a significant step towards protecting people subjected to inappropriate behaviour at work.

Bonnie is sharing her story in a new memoir entitled It Should be Easy Fix. The title is the response she gave her union rep when he told her she was the first to make a complaint about harassment. In telling her story, it’s clear that it was not easy, but her passion and strength in face of at times intimidating odds have made workplaces safer. Certainly, reports of harassment are still far too common, but through this case there are greater protections for those subjected to harassment and more responsibilities on employers to take meaningful actions when those reports are made.

In this episode of the History Slam, I talk with Bonnie Robichaud about her memoir. We discuss the timeline of her case and how the book came together (4:00), her reaction to the case taking so long (18:45), and having other women reach out to her throughout the process (21:50). We also chat about the decisions leading to the Supreme Court case (26:05), the problem with non-disclosure agreements (32:00), and her advice for anyone going through a similar circumstance (34:55).

Sean Graham is a historian of Canadian broadcasting, an Adjunct Professor at Carleton University, & a contributing editor with Activehistory.ca