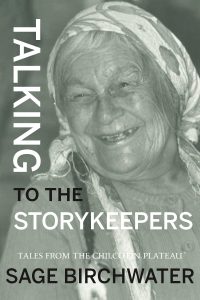 For every strong, thriving community, there are people actively keeping it alive at its centre. Whether that’s hosting events, checking in on others, or sharing the living memory of the place, these individuals build an environment where stories are shared and passed to the next generation. But when they’re gone, what happens to their stories? Who is there to take that central role in the community? Especially in some of Canada’s rural areas, where younger people are increasingly moving to urban centres, there is a threat to the longstanding regional cultures, stories, and histories that have tied communities together for generations.

In the Chilcotin Plateau, Sage Birchwater spent years gathering stories from those people who spent their lives building the community. With tales from their own lives as well as those that had been passed down through the generations, Birchwater preserved stories that were being lost to colonialization. And as modern technology changes how we communicate, in particular the ways people stay in touch, the opportunities to share stories have decreased – a problem further exacerbated by the pandemic.

The result of this work is Talking to the Story Keepers: Tales from the Chilcotin Plateau. In the book, Birchwater shares the stories from his decades living in the region and provides a spectacular window into the lives and cultures of its residents. The stories are wide ranging – from the trauma of residential schools on familial relationships to the seeming absurdity of a brass band playing in a church while it was being transported across a river – leaving the reader both moved and entertained. And while the book is a regional history, it speaks to issues of community building, identity, and colonialism that exist across the country.

In this episode of the History Slam, I talk with Sage Birchwater about the book. We discuss his approach to the book and building trust with family members (6:01), the sense of community in Chilcotin (11:06), and how stories are lost to colonialization (13:29). We also chat about how stories disappear (17:31), moving a church across a river (27:26), and the national appeal of these stories (33:15).