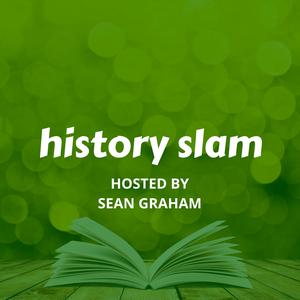 On July 11, 2012, we released the first episode of the History Slam Podcast. It featured my conversation with Ian Milligan, which we recorded at the 2012 CHA Annual Meeting at the University of Waterloo, where Ian is now a full professor. The idea behind the show was simple: what if I talked to interesting people doing interesting historical work? I always wondered how faculty keep up with trends in the field and figured this could be a good way for me to maintain a broad understanding of where history and historical research was going.

A lot has changed since that first episode. I was a PhD student at the time, but have since graduated, lived in different countries, worked in various public history settings, and have taught in very different environments. The one constant of my career has really been the podcast, which has been a wonderful, if at times stressful, part of my professional journey.

When I think about the early days of the show, though, I think about the journeys of the first few guests we had. Episode 2 featured a conversation with Victoria Lamb Drover, a PhD student who has since gone on to great success in with Saskatchewan Indian Institute of Technologies. The mercifully unreleased pilot episode was a chat with Aaron Boyes, a fellow PhD student at the University of Ottawa, who has parlayed his education into a career with the federal government. The 4 of us have all taken divergent paths, so I wanted to look back to see how our studies in history influenced our careers and how we take stock of the discipline 10 years later.

In this 10th Anniversary Special, I catch up with Ian Milligan, Victoria Lamb Drover, and Aaron Boyes. I start by talking with Ian about his shift towards digital methodology, where he sees history going, and his advice for prospective graduate students. I then chat with Vickie about how she got into administration, the benefits of being challenged in history courses, and how her studies influence her current work. From there, Aaron joins the show to reflect on his journey to the government, his conflicted feelings about grad studies, and the skills historians develop. I finish by discussing my journey through history programs, the financial reality of historical study, and the podcast’s role in my career. I also thank everyone who has ever listened, all the guests over the years, and the folks behind the scenes who have helped the show reach the decade mark.