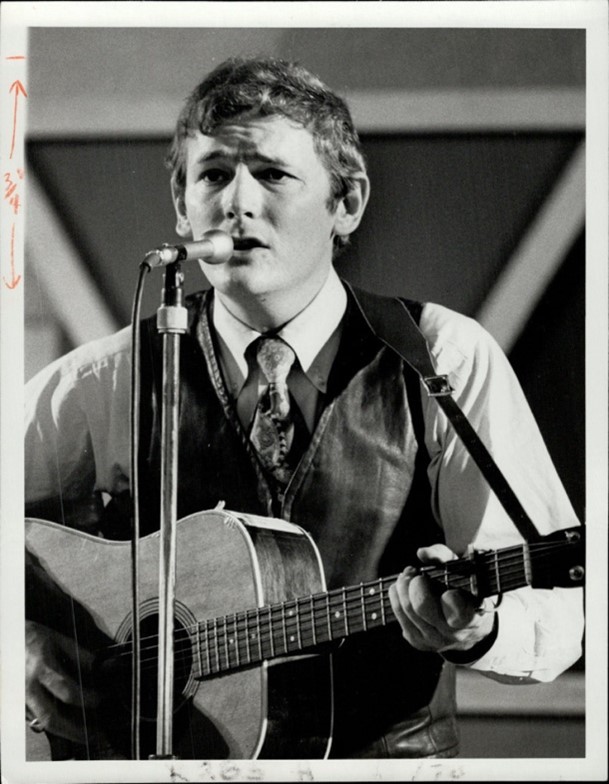 On this day, 56 years ago, Canadian folk singer-songwriter Gordon Lightfoot and his song “Canadian Railroad Trilogy”—a tune steeped in national mythology—became the focal point of a CBC-produced centennial television special, 100 Years Young, on New Year’s Day, 1967. While his work is now largely synonymous with Canadian identity, Lightfoot did not always hold this esteemed position within Canada’s national popular culture.

Canada’s 1967 centennial marked a time when both the country and Lightfoot were eager to claim their identities. This period was marked by tension and a growing desire for national pride in the face of American cultural hegemony, and Canada saw an opportunity to reify its national mythology. It is within this context that Gordon Lightfoot was enlisted to create his song “Canadian Railroad Trilogy”—a unique opportunity at a likewise unique moment in Canadian history, where old familiar chords would be used to write a new song.

In 1967, Lightfoot embarked on his first-ever cross-country tour as part of Festival Canada. Riding a new wave of nationalism in Canada, it did not take long for Lightfoot to be catapulted from playing in Yorkville clubs to headlining Toronto’s Massey Hall. Although Lightfoot did see success in the years prior, the release of “Canadian Railroad Trilogy” solidified his place as a mainstay in Canadiana and would become one of Lightfoot’s most iconic and enduring songs.

In a 2012 interview with the CBC, Lightfoot speaks to the origins of the song, “Canadian Railroad Trilogy,” describing how he was approached by a producer at the CBC and had to write the song under the pressure of time. He explains that he was handed a book about Sir William Cornelius Van Horne from the CBC library that the producer instructed him to read before penning the song.

This account is somewhat limited given that Lightfoot can be cagey in interviews, but a more complete account of the event can be found in Nicholas Jennings’s Lightfoot, the first authorized biography of Gordon Lightfoot for which Jennings conducted extensive interviews with the singer-songwriter. Jennings writes that Lightfoot was approached by CBC producer Bob Jarvis who wanted to commission Lightfoot to write a song for an upcoming TV special the CBC was working on.

As a rising Canadian talent who had already composed “Steel Rail Blues,” along with two train-themed songs for a promotional film about the Canadian National Railway, Lightfoot seemed like a natural fit. Jarvis explained that the special needed a folk ballad that would encapsulate the story of Canada’s birth and envisioned the song being specifically about the Canadian transcontinental railway.

Lightfoot was then ushered to the CBC library with instructions to borrow a book on the architect of Canada’s first transcontinental railway, Sir William Cornelius Van Horne. The exact title of the book has not been shared, although the published works available at the time included mainly volumes of letters Van Horne had written. This would fit with the language Lightfoot used in a 2013 interview with the UC Observer, in which he explained that Jarvis had instructed him to go to the library and “get a book by Sir William Cornelius Van Horne”—rather than a book about him.

In an interview with Jennings, Lightfoot explained his writing process for “Canadian Railroad Trilogy” in greater detail:

I started with a ballad, reaching back to an old barbershop tune I used to do called “The Rose of Tralee.” I put that to work in the slow part and found this word navvies, which were the railway workers, in the book on Van Horne. I started listening to Bob Gibson’s “Civil War Trilogy” and decided to use his format—fast going in, slow in the middle, fast going out. And it came to me. Got into a great key. Open F chord. Same way I’d written “Early Morning Rain,” but very few others. I stayed up all night working on it, right up until nine or ten in the morning. Then sleep and pile right back into it. Coffee, cigarettes—nothing else. No booze at that point. The song was done in three days.

Interestingly, Lightfoot mentions drawing inspiration from Bob Gibson’s “Civil War Trilogy,” a deeply American folk song, which is quite ironic since a great deal of Canadian nationalism during this period was focused on distinguishing Canadian identity from its American counterpart.

Lightfoot’s recollection is imbued with its own mythical status, suggesting that it was essentially just a brief meeting with a CBC producer and three days of hard work that resulted in this prolific song. However, journalist and former CBC employee Ted Barris offers another version of the story, alleging that the origins of the song reach back to much higher levels of public office.

In a blog post from 2017, Barris claimed that the original idea for such a song about the railway was linked to a meeting that occurred in 1966 between Bob Jarvis of the CBC and then-Prime Minister Lester B. Pearson. During a meeting about putting together a television event for Canada’s centennial celebrations the following year, the idea emerged to incorporate the story of the Canadian Pacific Railway’s creation, at which point Jarvis suggested that Gordon Lightfoot would be the right person for the job. Notably, the ‘right person for the job’ was a white folk singer from Ontario—aligning with what scholar Michelle MacQueen refers to as “hegemonic Canadianness.”

Barris spoke to how, years later, Jarvis told him, “I never had the slightest concern that Gordon would produce something that was memorable. […] What I didn’t know is that it would be such a jewel. I believe ‘The Canadian Railroad Trilogy’ will be sung a hundred years from now. It’s that important a piece of music.”

The stage was set for the New Year’s Day celebration of Canada’s centennial with Lightfoot’s appearance on 100 Years Young. Although footage of the entire special is hard to come by, the black-and-white video of Lightfoot singing “Canadian Railroad Trilogy” is unofficially available through YouTube. Seemingly overnight, Lightfoot and “Canadian Railroad Trilogy” were thrust into the national spotlight.

In musician and author Dave Bidini’s Writing Gordon Lightfoot: The Man, the Music, and the World in 1972, one commentator remarks, “In 1967, it was impossible to turn on the radio without hearing [Canadian Railroad Trilogy].” This was quite a feat considering the song was not released in any official capacity as a single, and its run time was nearly seven minutes long when radio stations typically favoured quick three-minute songs.

Jennings argues that at this point, Lightfoot’s name became “synonymous with a confident Canada caught up in the euphoria of its hundredth birthday celebrations.” Journalist Tom Hawthorne, author of The Year Canadians Lost Their Minds, sees the televised performance of “Canadian Railroad Trilogy” that kicked off centennial celebrations as one of the unifying and defining moments that got people excited about the centennial, sparking a wave nationalistic projects commemorating the 100th anniversary.

Lightfoot’s task, entrusted to him by the CBC—as well as then Prime Minister, Lester B. Pearson, according to Barris—was to compose “a big folk ballad that captured all the grandeur of Canada’s birth,” as Jennings puts it. It is possible that political actors influenced Lightfoot’s creation of this cultural product, a song, to engender nationalistic sentiments that were desired for Canada’s centennial year.

Undoubtedly, Lightfoot was not lacking agency and made the decision to accept this commission and compose the song, which would prove mutually beneficial to all involved parties. Lightfoot was Canada’s “first natural-born star,” according to Bidini, and he remains a mainstay of Canadian music and culture. He has reaped the rewards bestowed only on those who allow themselves to become absorbed into the Canadian national identity. His numerous awards and accolades for music deeply inflected with the Canadian landscape and mythology have allowed Lightfoot to enjoy a national celebrity and longevity that few other Canadians have known.

Chris Hemer is a settler scholar, musician, and PhD student in the Cultural Studies Program at Queen’s University.