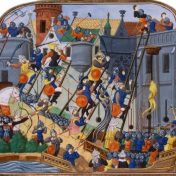 Mairi Cowan The medieval has made a resurgence in the news. Hakeem Jeffries, Democratic Senator for New York, issued a tweet declaring “No medieval border wall for Trump,” followed by Dick Durbin, Democratic Senator for Illinois, who tweeted that “a $5 billion medieval wall is no solution for illegal immigration or stopping drugs from coming across our border.” Donald Trump… Read more »

Steven High Most mills and factories close with a whimper and not a bang. Few were therefore prepared for the media fire-storm sparked by General Motor’s (GM) decision to close its auto-assembly plant in Oshawa, putting 2,500 Canadians out of work. What makes this closure so special? For starters, there is the historic centrality of the auto industry in Southern… Read more »

by Christo Aivalis In the era of Donald Trump and Doug Ford, populism’s reputation has taken quite the tumble, associated now more than at any time in the recent past with the alt-right movement, predicated in large part on xenophobia, racism, misogyny, and a reflexive aversion to anything that may be connected, however tenuously, to the ‘Social Justice Warrior’ caricature…. Read more »

By Elizabeth Mancke The election of Donald Trump as US president raises concerns about the impact on Canada: on trade, energy policy, currency exchanges, pipelines, climate change. Most anxiety inducing is the toxic turn of civic discourse, as the US political process tolerated expressions of racism and sexism, as well as outright lies and intimidation. The contaminating effects, we fear,… Read more »