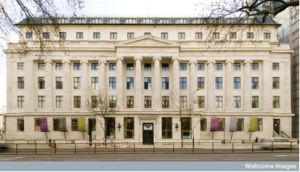 Wellcome Trust Centre for the History of Medicine

“a historic advance in social justice, comparable to the establishment of Medicare and Social Security. They said the bill would also put pressure on rising health care costs and rein in federal budget deficits.”

“This is the Civil Rights Act of the 21st Century” (Representative James E. Clybum of South Carolina)
“This isn’t radical reform, but it is major reform” (President Barack Obama)
The bill heralded “a new day in America” (Representative Marcy Kaptur of Ohio)

And so forth. The bottom line is this: it is clear that the Health Reform Bill was not only an important milestone in the history of the United States, but also raises significant political, social, economic, and cultural issues, and thus embodying these issues within the fabric of the nation.

10 days after the bill passed, the Wellcome Trust in London, England abruptly announced that intended to withdraw its funding from the Wellcome Trust Centre for the History of Medicine. The Center does not supply health care for its population but rather provides an institutional source for historians of medicine to evaluate the history of health and illness. In 2000 the Trust reviewed the history of medicine in the United Kingdom and explored the developments of medicine, its current status, and the role of the Center within the area. The Center has thus become an important staple in London and as a friend of mine so eloquently exclaimed, the Center has since then been considered as “the Mecca for historians of medicine.”

The Center has been committed to furthering the knowledge of medicine’s history in health and illness, not just in the United Kingdom, but also in other nations as well. The Center has produced and led by some of the most eminent historians of medicine, historians whose texts and articles built the bedrock of history of medicine courses. The late Roy Porter, wrote and edited over a hundred books and played a pivotal role in producing a new generation of social historians of medicine. Historians William Bynum, Vivian Nutton, Janet Browne, Christopher Lawrence and other wonderful scholars have worked and studied there—so has a great number of graduate students and postdocs. This is evident from the number of international scholars expressing their support against the closure.

Having already expressed worries to my fellow peers at the Institute for the History and Philosophy of Science and Technology about the place of history of medicine in HPS departments, this announcement came as a tremendous blow. I imagine its worse for those who risk losing their livelihoods with the closure, or those academics, like my supervisor, who were once trained at the Center and may lose a part of their (academic) identity. Yet, for me, this announcement places the future of the history of medicine on immensely shaky ground. To make matters worse, no reason has given for the closure—although fiscal considerations are probably the culprit— nor has a debate been held prior to the announcement.

I invite you all to sign the petition against the closure that is now online at:
www.petitiononline.com/WTCHOM/petition.html