Over the past few years, books like Michael Pollan’s In Defense of Food and documentaries like Food Inc. have increasingly challenged us to ask: How much do we really know about the “food” we buy and consume on a daily basis?

In his recent book, Eating Animals, an exposé on fishing and factory farming, Jonathan Safran Foer finds George Orwell’s famous words written in Animal Farm to be particularly apt: “All animals are equal, but some animals are more equal than others.”

There is growing concern about our unprecedented levels of meat consumption in North America, not to mention the ethical implications of the ways in which eggs and meat are now produced. Foer points out that while pigs are every bit as intelligent and feeling as dogs, in North America we are aghast at the very idea of eating dogs, let alone the aggressive, strategic processing of their body parts for consumption. Further, properly cooked dog meat poses no greater health risks than any other meat, yet thousands of dollars are spent to euthanize dogs each year. There are parallels to the North American taboo against dog eating in Europe and South Asia: “The French, who love their dogs, sometimes eat horses. The Spanish, who love their horses, sometimes eat their cows. The Indians, who love their cows, sometimes eat their dogs.” (Foer, 25) 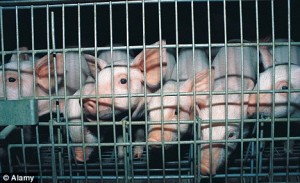 Cramped conditions on factory farms have led to high levels of disease among the animals. Pigs, for example, are increasingly treated with antibiotics.

These taboos suggest that our cultural and social familiarity with animals guides our thinking about the treatment of the animals we eat. In North America, we are divorced from the conditions in which the latter live and die for our consumption more than ever before. 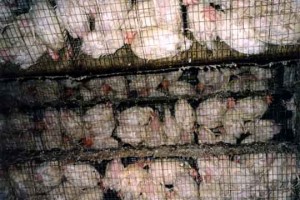 Chickens on a factory farm

The introduction of hybrid corn feed, de-beaking practices, chain-driven feeders, drugs and antibiotics, as well as slaughtering and processing market brands from the 1940s onwards have revolutionized the animal food industry. Family farms of the past have become factory farms run like corporations. Animals are now mass produced, confined in small spaces, injected with hormones, “processed” and shipped en masse to our grocery stores. More than ten million land animals are raised and killed for food every year in America alone. The consequences are massive, and directly linked to environmental destruction, world hunger, and flu epidemics. Damage has also pervaded fisheries. Modern industrial fishing lines can be up to 75 miles long, the same distance between sea level and space, and as much as 80 to 90% of sea creatures caught in these lines are bycatch – that is, killed “by accident.” Researchers and scientists predict the total collapse of all fished species in less than 50 years. They assert that human interactions with fisheries have come to resemble “wars of extermination.”

Our relationship to animal food has a rich, complex history. Be it animal torture, testing or human methods of breeding and killing fish, cows, pigs or chickens for our consumption, reformers have long campaigned for the rights of animals.

Within the broad humanitarian reform campaigns against slavery, vice, and child labour in the late eighteenth and early nineteenth centuries, William Wilberforce and his contemporaries founded the Society for the Prevention of Cruelty to Animals. This first animal welfare organization would later become the Royal Society for the Prevention of Cruelty to Animals (1824). In 1809, two years after the legal abolition of the slave trade in Britain, Wilberforce presented a Cruelty to Animals Bill to the House of Commons. He and his contemporaries lobbied Parliament throughout the nineteenth century against animal baiting, cruelty and experimentation. 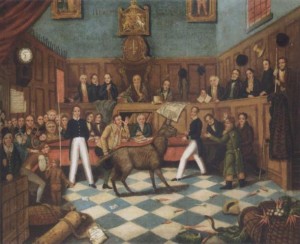 Parallels have frequently been drawn between the legal status of animals and that of human slaves. Slaves in the past were compared to animals. Some still are. Animal rights campaigners are now comparing the abuse of animals to slavery. Before his death, Donald Watson, the inventor of veganism, argued “We can see quite plainly that our present civilization is built on the exploitation of animals, just as past civilizations were built on the exploitation of slaves.”

For some, “animal liberation” is the social justice movement for the next millennium – abolition for the twenty-first century. Many stress Ghandi’s famous words: “The greatness of a nation and its moral progress can be judged by the way its animals are treated.”

Irrespective of our individual perspectives on this issue, we are facing sobering collective realities. Consider three: environmental, health and job quality concerns. Animal agriculture currently makes a 40% greater contribution to global warming than all transportation in the world combined. Nearly one-third of our earth’s land service is dedicated to livestock. The polluting strength of manure resulting from factory farmed animals is approximately 160 times greater than that of raw municipal sewage. In spite of this, limited waste-treatment infrastructure is in place. Further, studies have shown that those living nearby factory farms experience sore throats, coughing, runny noses, diarrhoea and abnormal levels of tension, depression, anger, fatigue and asthma, especially among children. Research also shows that the more meat one eats, the more likely one is to die of heart disease, cancer and stroke. Lastly, skilled farmers continue to be replaced with wage and contract “line workers” who, according to preliminary reports, are experiencing higher levels of stress and on-the-job injuries.

In spite of these concerns, global meat consumption is predicted to double by 2020, and countries like China and India are adopting Western methods of factory farming in order to supply their growing middle classes with meat and eggs.

Today, perhaps more than ever before, we are morally bound on multiple levels to consider: When is eating animals a good idea? Is it ethical?

8 thoughts on “Eating Animals: “All animals are equal, but some animals are more equal than others.””